Danqing Liu Research - http://danqingliu.nl/
This research is embedded in the research group of stimuli-responsive functional materials and devices (SFD) at Eindhoven University of Technology.

This research encompasses the development of new responsive materials like silicones, hydrogels and liquid crystal polymers, structured on (sub-)micrometer length scales and adapting triggered pre-set deformations, leading to e.g. complex folding or unfolding (origami), self-propulsion (locomotion) or localized topographical changes of the surfaces (smart skins). Built-in sensing functions, either intrinsically by the materials itself or by integrated optical, electrical or chemical functions, is an important aspect translating mechanical response to real robotic functions. 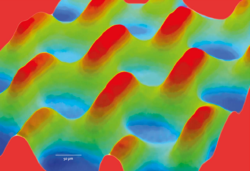 The objective of the project ‘Communicating Surfaces’ was to develop a polymer surface that safely and in a controlled way converts electrical signals into tangible surface patterns. The potential applications are manifold. In this interview, Danqing Liu (Eindhoven University of Technology) shares her visions: programmable braille, tactile keys on touch screens and self-cleaning surfaces, for example, to help keep the Mars Rover’s solar panels free of dust. The communicating polymer layers developed by Danqing can become an attractive interface between man and machine or even between robots, useful in robotics. “A robot will be able to feel the surface topography offered by another robot, like scanning a finger print or sensing goose bumps.”
Stretching the boundaries of materials. Six projects of the 4TU.HTM programme 'New Horizons in Designer Materials', p.12-19, March 2020. 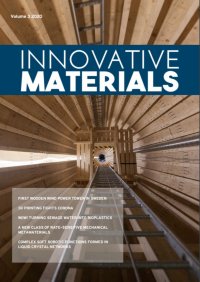 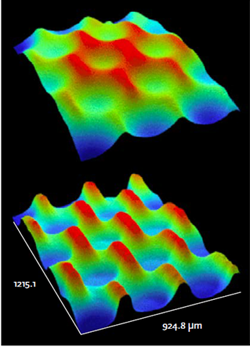 Surface protusions emerging in a thermally responsive liquid crystal polymer network when the temperature is raised (from top to bottom picture).

Dynamically control over surface topologies in (sub) micrometer range has many possibilities in modern applications. For example the optical properties of thin films and coatings are largely affected by transformations in surface structure and shape. By controlling the surface topology lens structures can be formed in an autonomous manner and their focusing depth might adapt to an external stimulus such as the light and its directionality. Also the mechanical properties can be altered by the appearance or disappearance of protrusions in the surface, such as friction, stick and adhesion. In microfluidic applications mixing can be generated by surface topologies in the microchannels. Moreover, it is possible to control the wettability of surfaces by sub-micron surface reliefs.

In this project we are interested in designing light responsive coatings that by forming/ erasing the surface topographic structures deliver tactile feedback. Light is selected as the trigger due to its easy accessibility and can be addressed remotely. In order to provide adequate changes for the touch sensation. The light responsiveness needs to strive towards a ‘faster, higher, stronger’ deformation. This means the switching speed of 10 Hz, formed structures in few micro-meter height and mechanically reliable coating needs to be developed.

On-target triggered liquid secretion materials are essential for medicine and energy. A responsive coating that can secrete fluids reversibly and repeatedly under the control of light is developed. The principle is based on creating a porous smectic liquid crystal network in which the fluids are homogenously distributed. The smectic liquid crystal network is provided with light-responsive azobenzene moieties. Upon illumination with UV light, the copolymerized azobenzene moieties undergo trans-to-cis conversion. This may cause a contraction along the coating and mechanically squeezes out the initially locked fluids. The secretion can be integral over the whole surface or can be localized by selective exposure, localizing azobenzene distribution, and creating complex molecular configurations. The liquid secretion is reversible that upon illumination with visible light, the initial highly ordered liquid crystal networks are retained and the released fluids are reabsorbed. The on-demand released liquids have many potential applications, including drugs delivery, agriculture, antifouling coatings, marine industry and personal care.

Figure. Reversible liquid secretion under the control of light. 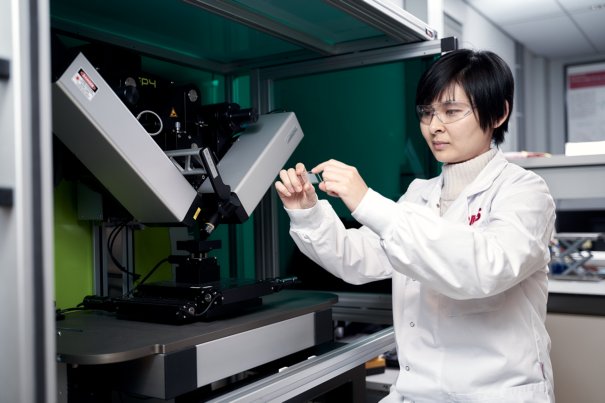 Danqing Liu received her master degree in Electrical Engineering in 2009 at Delft University of Technology. She joined the Department of Mechanical Engineering at Eindhoven University of Technology for her PhD research. She developed polymer responsive surfaces based on hydrogels and liquid crystal polymers. She received her PhD degree in 2013. In the same year, she joined the Department of Chemical Engineering and Chemistry at the same university working as a postdoctoral student on new mechanisms of surface activation. In 2015 she was a Research Fellow at the Institute of Complex Molecular Systems in Eindhoven. From 2019 she is appointed as Assistant Professor ) at the Department of Chemical Engineering and Chemistry, Eindhoven University of Technology. She received a Dutch national grant from 4TU.HTM (2015), and a Veni grant (2016) from the Dutch national science foundation (NWO), and Start-up grant (2019) to proceed her research within the Netherlands. In 2020, she was awarded the Michi Nakata Prize for Early Career Achievements 2019 from the International Liquid Crystal Society (ILCS) for "her outstanding achievement in stimuli-responsive liquid crystals and liquid crystal coating systems in a wide range of applications covering from soft robotics and advanced optics to healthcare systems. The diversity of her research will make her hold the leadership in the field."