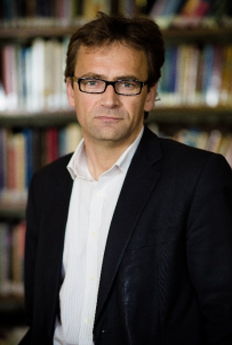 Professor Jim Hall FREng is Professor of Climate and Environmental Risks in the University of Oxford, a Senior Research Fellow in the Department of Engineering Science and fellow of Linacre College. His research focuses upon management of climate-related risks in infrastructure systems, in particular relating to various dimensions of water security, including flooding and water scarcity. Jim Hall is a member of the UK independent Committee on Climate Change Adaptation. In 2010 Jim was elected as a Fellow of the Royal Academy of Engineering "for his contribution to the development of methods for flood risk analysis, which underpin approaches for flood risk management in the UK and internationally." He sits on the Public Voice Committee of the Institution of Civil Engineers and was a member of the panel conducting the Institution of Civil Engineer’s 2014 State of the Nation Infrastructure assessment and the Executive Group for the National Needs Assessment – A Vision for UK Infrastructure. Until 2015 Jim Hall was co-chair of the Global Water Partnership / OECD Task Force on the Economics of Water Security and Sustainable Growth. He advises the World Bank on water security and is editor of the AGU journal Water Resources Research. Jim leads the UK Infrastructure Transitions Research Consortium, which has developed the world’s first national infrastructure simulation models for appraisal of national infrastructure investment and risks. His book "The Future of National Infrastructure: A System of Systems Approach" was published by Cambridge University Press in 2016. He sits on the Expert Advisory Group for the National Infrastructure Commission and Chairs the DAFNI Data and Analytics Facility for National Infrastructure.

For more information, visit the website of Jim Hall.

Back to the programme overview