Prof. Marcel Verweij (Wageningen University & Research) has taken on the role of Scientific Director at the 4TU.Centre for Ethics and Technology (4TU.Ethics). He succeeds professor emeritus Anthonie Meijers (TU/e).

The 4TU.Ethics centre focuses on research, education and the exchange of information on the ethical aspects of technological developments. Its chairmanship rotates between the chair holders of the research groups at the four Dutch universities of technology (TUs). For the next four years, it is the turn of Wageningen University & Research.

Marcel Verweij will continue the activities set up by Anthonie Meijers. A key aspect will involve the organisation of the Graduate School, which will be led by WUR colleague Vincent Blok. This is a programme of courses in Ethics and Technology for doctoral candidates at the four TUs. It also includes new plans for facilitating short internships outside academia. Philosophers and ethicists have skills that can prove useful outside the academic world as well. ‘Our aim is to broaden the career prospects of these often still young people because we are aware that they face considerable uncertainty about their futures’, says Verweij.

“It makes sense also to explore at European level how we can operate as a joint university centre.”
Marcel Verweij
Scientific director 4TU.Ethics

Another plan is to investigate how the 4TU Centre can serve as the coordinating agency in European research applications. There is already excellent collaboration, which previously resulted in the awarding of the ‘Ethics of Socially Disruptive Technologies’ NWO Gravitation grant; €17.9 million for research into the ethical aspects of new technologies. ‘It makes sense also to explore at European level how we can operate as a joint university centre. Of course, individual researchers and centres will continue to develop their own research applications, but in some areas it can be beneficial to do that under the 4TU flag’, continues Verweij.

Verweij is also working on further collaboration with the 4TU Centre for Engineering Education. The aim is to teach engineers the skill of ethical reflection to ensure that ethical values such as justice and integrity are also taken into account in the design of new technologies. ‘In addition to sensitivity, that reflection also calls for knowledge and skills in analysing problems. Together with our colleagues, we are exploring the most effective way possible of developing these competences’, says Verweij.

Alongside Marcel Verweij and Vincent Blok, the 4TU.Ethics organisation consists of a management team representing the four TUs and two coordinators, Jochem Zwier and Mariska Bosschaert. Meet the 4TU.Ethics team.

Marcel Verweij has held the chair of Philosophy at Wageningen University since May 2013. His research focuses on the philosophy and ethics of public health. Current projects cover such areas as ethical questions concerning socio-economic health disparities, the safety of donor blood and the sustainability of medical technology. Verweij is also working with legal philosopher Roland Pierik (University of Amsterdam) on a book about vaccination regulation. He also advises the Dutch National Health Care Institute (which new treatments and technologies should be reimbursed as part of basic health insurance) and regularly sits on committees of the Health Council of the Netherlands (for example on the use of apps for public health purposes).

4TU.techtalk 'Avoiding the ethical pitfalls of a data-driven world' 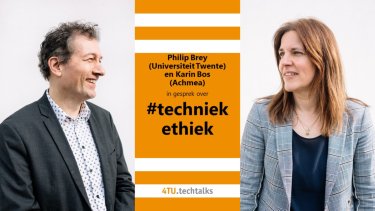 4TU.Centre for Ethics and Technology

The 4TU.Centre for Ethics and Technology focuses on research, education and the exchange of information on the ethical aspects of technological developments. Fields of research include the legitimate use of data (artificial intelligence), the ethical aspects of biotechnology and the responsible use of technologies in combating climate change. The centre has a network of eighty active junior and senior researchers, in which doctoral candidates are afforded a key role. This includes contributing ideas to the Management Team and raising issues faced by young researchers.

Top scientists in the field of ethics and philosophy were awarded an NWO Gravitation grant in 2019, amounting to 17.9 million euros for research into the ethical aspects of new technologies. The programme, which will run for ten years, is a collaboration of researchers from the University of Twente, TU Delft, Eindhoven University of Technology and Utrecht University, in which Wageningen University & Research, Leiden University and University Medical Center Utrecht are also participating.

The researchers are going to review time-honoured philosophical core concepts, such as autonomy, justice and responsibility, which are being challenged by technological developments. The ultimate aim is to develop an innovative perspective and gain greater control of the major changes that new technologies can bring about in such areas as artificial intelligence, synthetic biology and climate technology.