The spin-off of the spin-off | Capturing an accurate cardiogram of an unborn child. For a long time that was impossible, but it can now be done with new technology from Nemo Healthcare.

The heartbeat of an unborn child says a lot about the child’s development, such as congenital heart defects. That is why the heart rate is measured regularly, both during pregnancy and during childbirth. At present, obstetricians and gynecologists work with ultrasound technology in order to do this. An ultrasound transducer is placed on the mother’s abdomen and sends sound frequencies to the baby. The sound bounces off the beating heart. The movement of the heart changes the frequency of the reflected sound. This is how the heartbeat can be measured. The problem with this technology, however, is that the sound also bounces off other tissue in the abdomen. If the baby or the mother moves, the heartbeat can often no longer be measured properly. As a result, this heart rate measurement is only accurate in about seventy percent of cases.

Early this century, a young gynecologist at the Dutch Máxima Medical Center, Dr. Guid Oei, outlined the problem at the Eindhoven University of Technology (TU/e). This prompted Rik Vullings to look for new measurement methods as part of his graduation research. He discovered that electrodes on the abdomen give a much more accurate picture of the heart rhythm: “Our nervous system gives off electrical stimuli to the muscles that cause them to move. The heart, with a relatively large amount of muscle tissue, has a very recognizable electrical pattern. In principle, therefore, it is possible to make this signal visible, which is hidden among all kinds of other signals and noise. This is not easy, but we managed to do this at Nemo Healthcare,” Vullings explains. 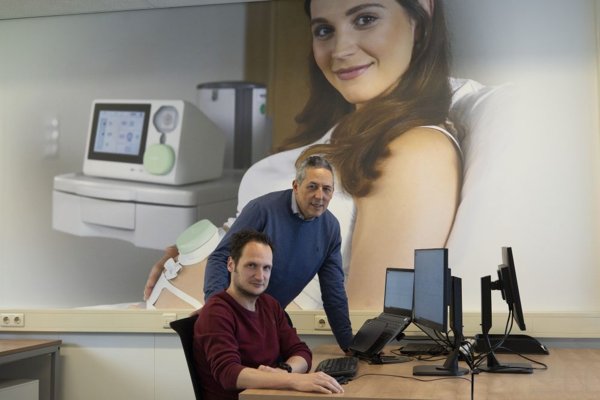 The electrodes are affixed to the abdomen like stickers and are thus able to measure the baby’s heartbeat for a long time. “This technology also makes it possible to make a cardiogram. This enables obstetricians and gynecologists to extract even more information,” Vullings continues. “It wasn’t previously possible to do that during pregnancy,” adds CEO Michiel Manuel.

The technology is very promising, which is why Vullings and his thesis supervisor Chris Peters – who also did research on this technology in the past – decided to valorize it. They were granted two valorization grants through the Dutch Research Council (NWO).

That was the starting shot for the spin-off Nemo Healthcare. An initial round of investment was followed by two loans from Bright Move to create a working prototype and to look at an initial business case. “We were able to set up the scientific side of the company properly, but for the business side, we started looking for someone who could help us with that,” says Vullings. “Bas Lemmens then quit his job (and the security that went with it) to join Nemo Healthcare as its first CEO.”

The company has undergone considerable development in recent years, both scientifically and commercially. Michiel Manuel, who had for a long time been in charge of the development, introduction and sales of medical systems at Philips, has been CEO of Nemo Healthcare since October 2017. Since then, the equipment from Nemo Healthcare is now being used in four university hospitals across Europe.

The device measures three things: the baby’s heart activity, the mother’s heart activity and the contractions activity. This information is displayed simultaneously in a graph on the gynecologist’s or midwife’s screen. They monitor the baby’s development and determine their actions based on this information. With the technology from Nemo Healthcare, this is more accurate and more comfortable than using the old methods. In one out of three cases where an abnormal heart rhythm is detected, there is actually something wrong with the child. “One of the things we want to do with our device is to prevent unnecessary interventions,” Vullings says.

Information about the heartbeat of mother and child is also very important during childbirth. The main risk during childbirth is a lack of oxygen to the baby, for example because the umbilical cord is pinched off or because it is wrapped around the baby’s neck. This can also be monitored via the heartbeat. If the child’s condition deteriorates rapidly, the gynecologist or midwife may decide that a C-section needs to be carried out.

A long way to go

In the meantime, it is clear that Nemo Healthcare’s technology is going to have a major impact on the advancement of obstetrics. Although the road to the new equipment was long and not always easy. Manuel: “As a start-up, you always have more ideas for your development than there is money.” He explains that between 2010 and 2015, the company managed to make some progress with small investments and loans from Bright Move and others, but after that, it stalled. The money ran out and salary payouts were delayed.

In early 2016, a grant from the European Union (the Horizon 2020 program) was approved and around four private parties invested in Nemo Healthcare. Then all of a sudden, the company had €7 million at its disposal and the development of the product gained momentum. By the end of 2018, the first version of the product was certified and was made available to selected hospitals.

The funding came at exactly the right time, but it could have all worked out quite differently. There had been 1100 applications for the grants that the Horizon 2020 program provided. Ultimately, Nemo Healthcare was able to secure the largest grant amount. Attracting investors in an early phase before a product has had the chance to prove itself on the market is not easy either: “For the steps from concept to a first product, pockets of funding can often be found. But at a certain point, investors have to step in with serious amounts of money,” says Frank van de Ven, business developer at Bright Move and TU/e.

Given that development and validation in medical systems is done very meticulously, these procedures often take a long time. For example, companies need resources in order to have their product undergo extensive clinical testing and approval. This allows them to prove that the technology works and is safe. But a lot of investors want to see proof before they decide to invest.

“This phase is also referred to as the valley of death in business development.” Van de Ven goes on to say, “In order to get through this, you have to have a good product and a good story, of course. Although sometimes it is also a matter of being in the right place at the right time, in other words, a bit of luck.” Manuel adds: “We have a product that appeals to many people, it has everything to do with the beginning of life, with pregnancies and healthy children. Everyone comes across that in life. That makes it easier to get people enthused.”

In 2021, Nemo Healthcare is planning to sell the equipment to various hospitals, particularly in Europe. “Then I expect that by the end of 2021, we will be in the black for the first time,” Manuel asserts. Apart from the business side, research into new applications for the technology is also continuing. For example, in collaboration with TU/e, the spin-off is looking into how the equipment can contribute to better detection of congenital heart defects during the 20-week ultrasound scan.

Vullings explains that about forty percent of heart defects are not detected by that ultrasound. While, in some cases, children with heart defects have a much better chance of survival if the defect is detected in time. “Administering certain medications or performing surgery immediately after childbirth can save the baby in some cases,” Vullings continues. Because Nemo Healthcare’s equipment can provide a detailed cardiogram, Vullings believes it will also help reduce the percentage of children in whom a heart defect is not detected before birth.

Nemo’s first device, after almost 20 years of research, product development and marketing, is all set for a huge commercial breakthrough. Manuel and Vullings have every confidence in this. Manuel: “Especially in view of the enthusiastic response from the very first users.”