We are eagerly awaiting the quantum computer. It promises to be a computer with unprecedented computational power and that will open new doors. Start-up Orange Quantum Systems is speeding up the development process with a unique collaboration in the brand-new quantum value chain.

Quantum technology is still relatively new. It is only since the early 1990s that several research groups have been developing technology based on quantum physics - the science of the tiniest particles. "Quantum physics itself is over a hundred years old, but we have only recently been able to actually apply the theory to technology," states Garrelt Alberts, co-founder of Orange Quantum Systems. The company supplies tools for quantum research to research groups at universities and companies. " We can accelerate the research of quantum technology for a variety of applications this way," Alberts notes. The company was founded over a year ago as a spin-off from the Netherlands Organisation for Applied Scientific Research (TNO). TNO and TU Delft initiated QuTech. These activities also led to Orange Quantum Systems as spin-off from TNO. 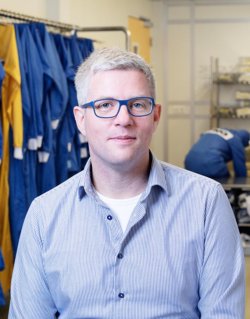 Research into quantum technology and the development of a quantum computer calls for high-tech hardware and software that is capable of communicating well with each other. That combined forms a device that resembles a mini-quantum computer. "It sometimes takes up to three years for a research group to build such a device. Even then, the real research still has to begin," Alberts says. Orange QS has gained a lot of experience in making these machines, which helps save time and therefore money for research groups. Alberts: "We essentially supply the tools that enable scientists to conduct research into quantum technology."

Through entanglement, all qubits can be instantaneously connected. This means that they are connected without being physically linked. If one Qubit changes, the other will notice it, even if they are thousands of kilometers apart. This means that incredibly fast and enormous calculations are possible.

Orange QS is not developing the technology inside this machine on its own. To do this, the company is collaborating with other companies, for example, within the Dutch IMPAQT consortium. "All the start-ups make a particular component for a basic quantum computer. We integrate everything and provide the software that is necessary so that all the components can communicate properly with each other," says Alberts. "We are basically providing the glue for the system. In turn, we can use this glue in our own products." Combining different components from different companies is a unique approach where the development of quantum computers is concerned.

"Many start-ups that are working on quantum computers get funding for a number of years and then go and develop all the parts themselves," he states. "That's a waste of time and money. We don't yet know what the best approach is for developing a quantum computer, so it's best not to place your bets on one horse. If that horse - in this case the technology - then turns out not to be the best, everything will have been for nothing." Alberts sees the development of the current computer as an example for the future quantum computer. "We also used tubes first before transistors were invented. That kind of development takes time. The transistor for the quantum computer has not yet been invented," he adds. "In the meantime, we are building the tools that will enable those technologies to become more mature.”

Now Orange QS is still mainly focusing on equipment for research groups, but in the future, these will include specialized equipment for the semiconductor industry. "So, we switch around a lot with the various suppliers to constantly raise all the components to a higher level and to ensure that they match up well with each other. Ultimately, we are dependent on the quality of the products that the suppliers provide."

Jérémy Veltin, Research Manager Quantum Technology at TNO: "The Orange QS approach is robust, it boosts the chance of success and reduces the overall risk. By not developing everything in-house, but rather by working together, they involve more people in its development. That's good for now and for the future." He saw Orange QS grow from an idea within his department to a spin-off that is able to stand on its own two feet. Ideas were validated through the internal Tech Transfer program at TNO. "There is a lot of demand for the product that Orange QS is supplying Veltin notes. "That's why I think the company is going to grow substantially over the coming years."

Orange QS employs ten people at the moment. "That's relatively few for the amount of work we do," Alberts goes on to say. "But if you add up all the people from the start-ups who work together, then that goes up to between fifty and sixty people." All the start-ups can ‘hold their own’ since they are already supplying their products to research groups. For example, to universities and to large companies such as Google and Amazon. In addition, Orange QS receives the support it needs from TNO. "We provide specific knowledge for projects and make facilities such as laboratories available," Veltin says.

By supplying the equipment for research, Orange QS also gets to see up close what the latest developments in quantum technology are. " In doing so, we hope to always be able to make the best possible equipment for testing the latest quantum chips," says Alberts. "We can then sell these back to the major chip development companies in the semiconductor industry."

"Right now, it's still a matter of trial and error as to how strong and bendable plastic is when using a given combination of materials. You could then use a quantum computer to quickly calculate this in advance." This also enables us, for one thing, to calculate beforehand how drugs will react in a patient's body. That would ensure that drug development would be faster and better uses would be available for patients.

"To really get a sense of what the impact of a quantum computer is, we need to have one made," Alberts maintains. "We didn't really know beforehand what the impact of ordinary computers would be either." The exact way the computer works is difficult to explain. "Not all quantum algorithms can be mathematically proven. Just as Artificial Intelligence (AI) cannot always be proven mathematically," he goes on to explain. It often works, but not in all cases. The workings of both AI and quantum algorithms are also not easily verifiable. "The quantum computer comes with the same challenges and uncertainties as AI. It's just that quantum technology is still substantially less developed; you could compare it to the AI of the 1970s.

For quantum technology to really gain momentum over the next few years, Alberts and Veltin contend that a good ecosystem is indispensable. "You need multiple companies and people to really drive change through," Veltin points out. That ecosystem is what Orange QS is now helping to build. "Right now, it is still centered in Delft, but we hope to expand it more on a national and international level in the future," he says. "This is such a huge development; we cannot do it alone as a knowledge institution or as a country." That is why he wants to work with other universities and companies throughout Europe. Meanwhile, the affiliated companies are continuing to grow into larger market players. Alberts has a clear mission: "We hope to become the ASML of the quantum computer."