The workshop ‘Evidence on Teaching Quality and Career Paths’ took place on 1 July 2022 as part of the 'Advancing Teaching' event in Amsterdam.
All news

On the last day of the 30 June-1 July Advancing Teaching event in Amsterdam several workshops were hosted by the Dutch Comenius network. In the workshop ‘Evidence on Teaching Quality and Career Paths’, 23 participants were facilitated to discuss and share their insights on types of evidence. Results from this session are included in project 2B from Sectorplan Onderwijs Bètatechniek which focuses on strengthening educational career paths in (technical) universities.

The workshop kicked off with an individual assignment. Participants were provided with eight different topics relating to teaching quality and career paths. Each participant was asked to write down possibilities of evidence by topic. The first four topics were ‘Educational Leadership’, ‘Educational Scholarship’, ‘Educational Organization and Management’, and ‘Teaching in Teams’. The other four were about getting promoted on the educational career path: ‘Teacher 4 to 3 to 2 to 1’, ‘UD/Assist.Prof. to UHD/Assoc.Prof.’, ‘Teacher 1 to UHD1/Assoc. Prof.1’, and ‘UHD/Assoc.Prof. to HGL/Full Prof’.

Next, the room was divided into smaller groups and each one was given one of the eight topics. Participants were asked to sit down with the topic that most appealed to them. Using post-its and a large flipchart, they went brainstorming towards a shared vision on the topic. At the end, each team was asked to pitch their results.

During the brainstorms, fruitful discussions arose. There were semantic discussions on whether educational leadership is the same as educational scholarship (no, they are not!). There was a convincing plea about how educational scholarship skills play an important role in pedagogical competence development. University educators build those skills and competence via (i) running their own educational, discipline-based practice, (ii) a reflective attitude towards their teaching and their students’ learning, (iii) a scientific embedding of their teaching (e.g. the use of educational knowledge, literature, and/or theory), (iv) planning for context-sensitive and evidence-informed education innovations, and (v) sharing those experiences and results via collegial talks, conferences, events, seminars, publications et cetera. Additionally, differences between universities became apparent such as which universities do and do not have a standalone educational career path. Or universities that do not apply the same kinds of publication standards.

Afterwards, results of the workshop were collected and analyzed. As a result, it was discovered that the type of evidence that occurred for each topic was ‘positive feedback’. To collect such feedback participants mentioned peer reviews, 360 feedback, references, and reviews from students. Topic-specific types of evidence were also evident such as 'having a vision' in Educational Leadership or ‘visible team contributions’ for Teaching in Teams. The three most mentioned types of evidence per topic by participants during the workshop are shown in image 1. 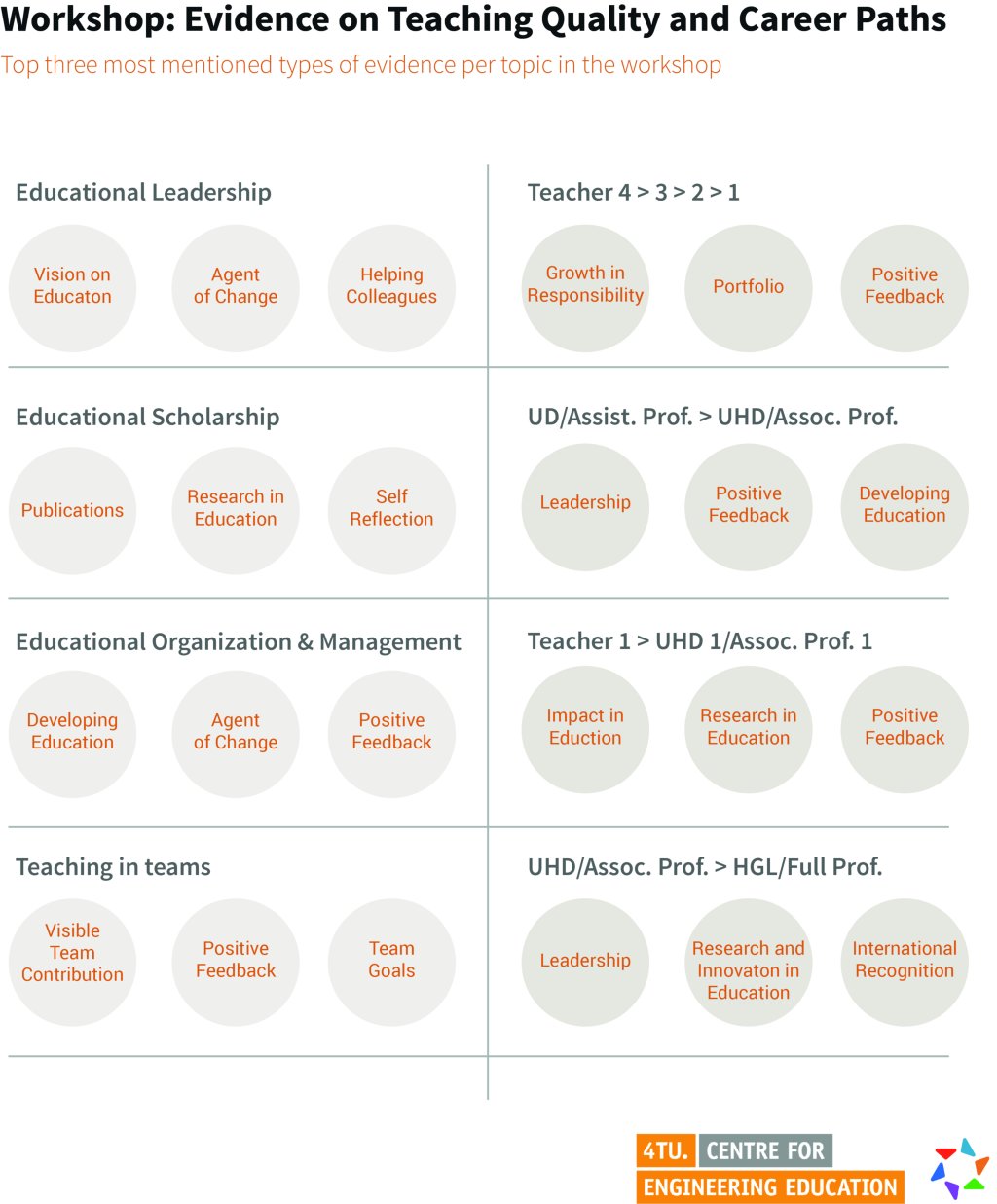 [Image 1]
Top three types of evidence mentioned by 23 participants of the workshop
‘Evidence on Teaching Quality and Career Path’ during the event.