How can we design robotic technology that responsibly supports education?

Play is the most critical job of a child: it is fun, but also involves learning and training collaboration. The social skills needed to collaborate are the most sought-after socio-emotional competencies for the 21st-century but are often overlooked in educational systems worldwide. Social robotic technology could play a significant role in supporting children’s collaborative skills if designed in a responsible and developmentally appropriate fashion. What if the technology we design for children could nurture social skills through play? What if toys could support collaboration through play in a developmentally appropriate way? This work is a form of transdisciplinary responsible design of technology, wherein roboticists, designers, and children work together.

“Co-designing with children has broadened my perspective on robotics and motivated me to develop methods for responsible child-robot interaction.”
Cristina Zaga

Push-one is a hybrid between a toy and a robot that communicates children’s prosocial intentions to influence people’s behaviors, leveraging their nonverbal communication affordances. Children from the Netherlands and the United States helped in the design process: they co-designed Push-one, a robothing that shows prosocial behaviours like helping or sharing in puzzle games.

Push-one does not tell kids what to do or how to behave. It is not a substitute for a friend or a teacher. Push-one recognises when children experience a conflict while playing a game and influences them to be helpful instead of fighting. Push-one has been tested in behavioural experiments with elementary school children. The results show that children are more prosocial after playing with Push-one. In a conflict situation, children help each other after they have seen Push-one sharing instead of not sharing. The research is a promising step towards the toys and the technology of the future. 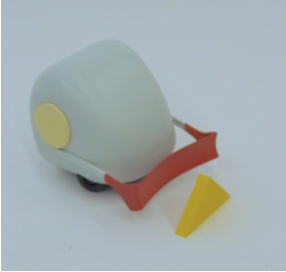 “I never thought I would work on a robot that does not look like one, does not behave like people think it should and yet has such a powerful impact on children’s collaboration!”
Student assistant

Push-one brings a number of values to the interaction with children: children’sindependent reflection; children’sagency over robot’s agency; and peer interaction over robot interaction. The research findings show that Push-one can positively impact children’s prosocial behavior and reciprocity, thereby promoting collaboration.

The methodological exploration of Push-one also suggests that designing robotic technology for children demands a focus on what is meaningful for children, attuning to how children develop. Robotic technology is often designed from an engineering point of view. The Peer-Play method used in this project has helped shift the attention from the technology to the children themselves. 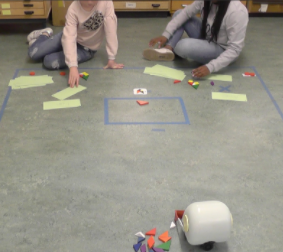