How can design mitigate the hidden dangers of smart speakers?

Smart speakers are an increasingly familiar presence in households worldwide. Indeed in 2020 the global installed base is expected to reach some 325 million. Yet as their popularity grows, so do concerns about the danger they may pose to well-being. Technology is never neutral, so the way people interact with voice assistants influences how they talk to other people and perceive the world around them. From reports of children developing aggressive behaviours to studies on the perpetuation of sexist stereotypes, human interactions with smart speakers are accompanied by seven hidden dangers: impoliteness, aggressiveness, gender stereotyping, exposure, shallow mindedness, emotional dependency and social detachment.

“What prevents us from replicating the way we talk with voice assistants with actual people?”
Felipe Pierantoni

This project aims to mitigate the hidden dangers of smart speakers by proposing new interaction concepts that foster well-being. To do that, a deep exploration of the relationship between people and smart speakers was developed, combining established user research methods with emerging thing-centred ones.

For example, interviews and observations were conducted not only with users, but with actual voice assistants as well. This led to various insights that would not be available from traditional research alone. These findings inspired a prolific ideation phase, where 71 ideas were devised to address the dangers of smart speakers. The concepts were then tested with users to determine which ones were more successful in fostering well-being.

This knowledge was captured into a Repertoire of Meaningful Voice Interactions, a novel toolkit that includes 45 guidelines to support design practitioners in designing positive voice experiences.

“To truly understand the impacts of technology, it is necessary to account for the thing’s perspective.”
Felipe Pierantoni

Supported by their striking popularity, it is safe to assume that smart speakers and other conversational agents are here to stay. As a consequence, the interaction styles developed now will remain among us for decades to come. Yet, current interactions with smart speakers silently lead us to develop negative habits such as being ill-mannered, paranoid or socially distant from loved ones.

The relevance of this project lies in its capacity to enable designers to start acting right now. Supported by tangible and practical guidelines, designers can create meaningful voice experiences that produce long-lasting positive impact. 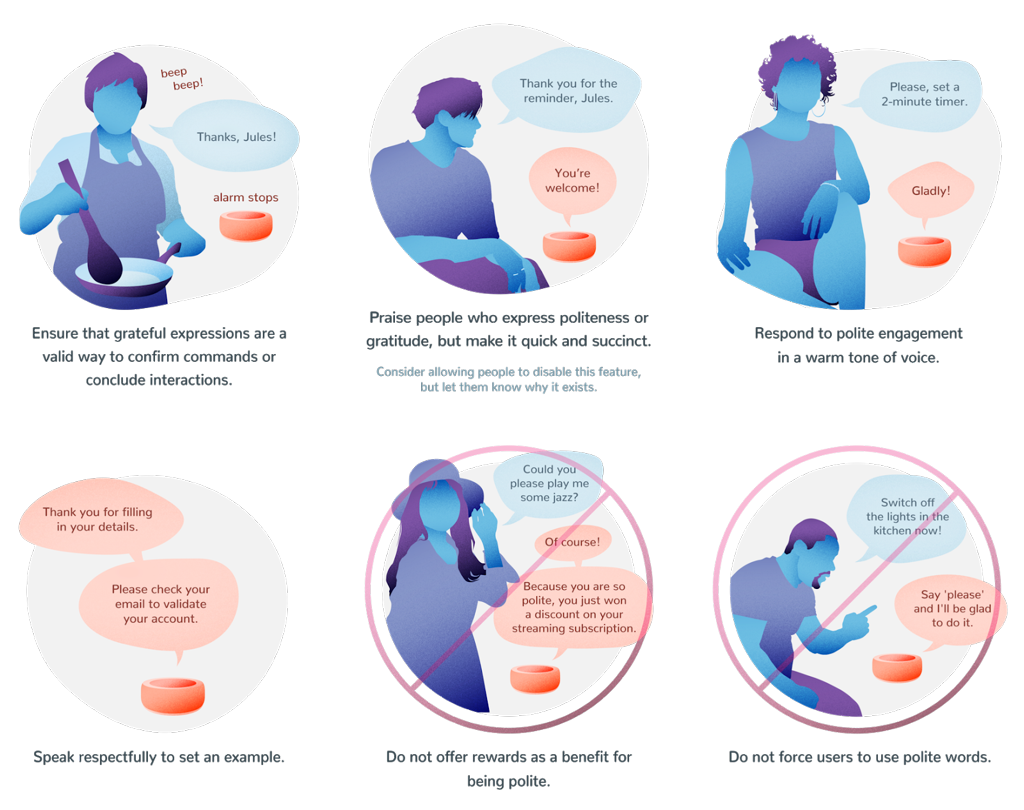