The Kine-Mould is a development that makes it easier to manufacture building elements with complex geometry. Since June 2014 the team has been working on a range of solutions and prototypes. Various building materials have been investigated such as concrete, glass and plastic composites. In a joint effort of TU Delft and TU Eindhoven the following prototypes were designed and built:
1. One for thermoplastic polymers;
2. One for concrete elements;
3. One for glass elements;
4. Several for inflatable mould surfaces.

Students carried out a significant part of the work. Companies were involved in the manufacturing process of the prototypes and application of the results.

If a thin polymer plate can be thermoformed into the correct geometry, this plate can be used as formwork for concrete or directly as a façade cladding panel. A closed two-face mould with closed edges is needed when using it as formwork. After hardening the concrete, the polymer plate can be removed and recycled.  Two principles for deformation were investigated; thermoforming with gravity and with vacuum. For thermoforming a thermoplastic panel edge is clamped by flexible edges on which actuators are attached. After heating the thermoplastic polymer above its glass transition temperature, the edge can be deformed by setting the actuators at desired height. The middle section of the panel is supported by a flexible layer, which can be manipulated by applying various tensions. The second principle relies on vacuum forming of thin acrylic plates. Here an air pressure difference is used after heating the thermoplastic to the proper temperature to control the exact edge shape. After cooling down to room temperature a two-face mould is constructed in a frame of edges, which can be filled with concrete. Since very thin plastic sheets are used, fluid or particles are needed to support the sheets under the concrete pressure.

The wish to create curved architectural glass elements has a history at both universities. At Delft, Dr. Karel Vollers was one of the first to succeed in manufacturing double-curved glass for architectural applications with a forerunner of the current flexible mould. At Eindhoven, Arno Pronk has been working on this topic for several years. In an earlier TU/e project students had already investigated the option to construct a small glass dome of double curved double glass units, joined together with vacuum-infused structural resins. This research projects presented the opportunity to align forces and knowledge to develop a state-of-the-art prototype and analyse the process in a more detailed manner. 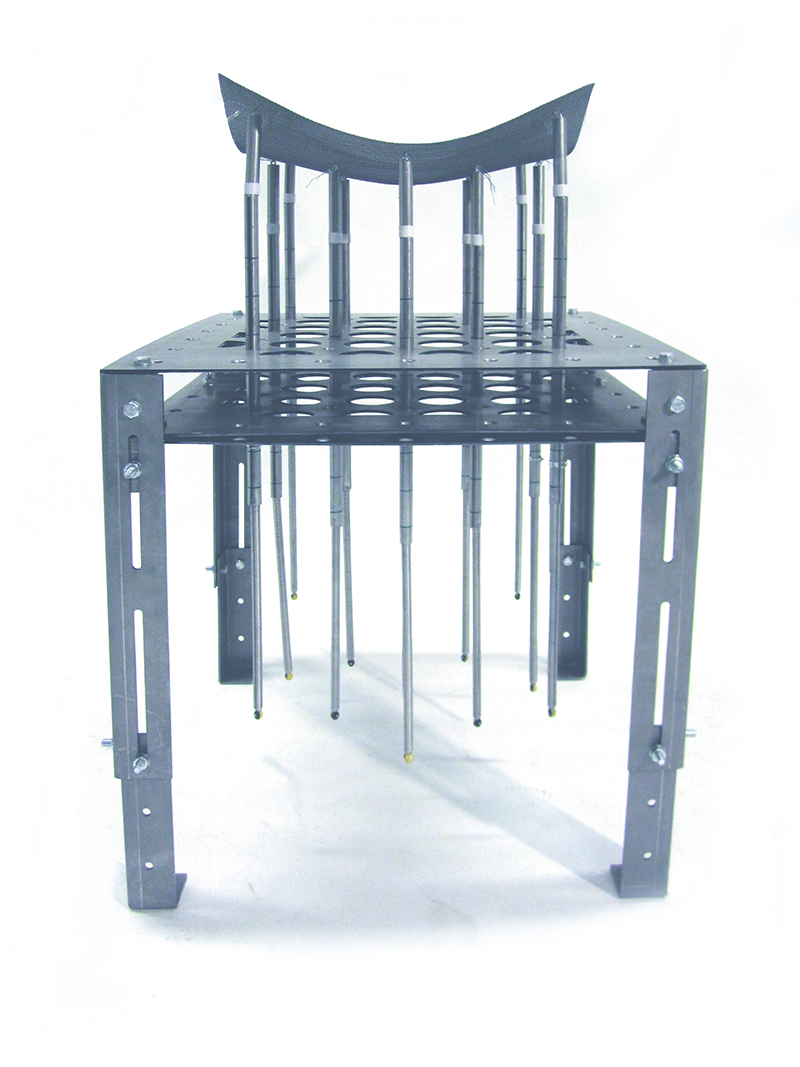 The forming of curved glass is as challenging as it is promising. If successful, it opens a wide range of promising possibilities: imagine shell structures consisting of load-bearing glass elements or think of hybrid building envelopes consisting of partially glass and concrete elements. Challenging however since glass is a brittle material and residual stresses after deformation to a large extent influence the structural behaviour and reliability of the curved glass element. Finally also the manufacturing process at high temperatures is challenging, since it requires heat resistant equipment. After some initial experiments at small scale (Figure 5), a larger prototype was constructed for bending glass with accurate dimensions in an oven. Two methods were tested: 1) the ‘pizza-shovel’ method, that pre-heats a glass panel wrapped in an insulating blanket, and then, after taking it from the oven with a pizza-shovel, draping and pressing it into its final, curved, shape on top of a pre-installed flexible mould. 2) the in-oven draping method: put the initially flat glass panel together with the flexible mould in the oven, and heat it until the correct shape can be formed with the plastic glass sheet. After a careful annealing process, the panel will have the correct curved shape. The prototype contains a mesh of elastic steel which is supported by a grid of 5 x 5 actuators is suitable for both methods. The actuators can be adjusted vertically in the desired height position, and allow horizontal displacement of the tips. An essential characteristic of the steel mesh is that the grid size and wire diameter are chosen in proportion to the actuator distance, as well as that it allows in-plane shear deformation.

Simple, robust and easy to repair solutions are key to the success of the mould. 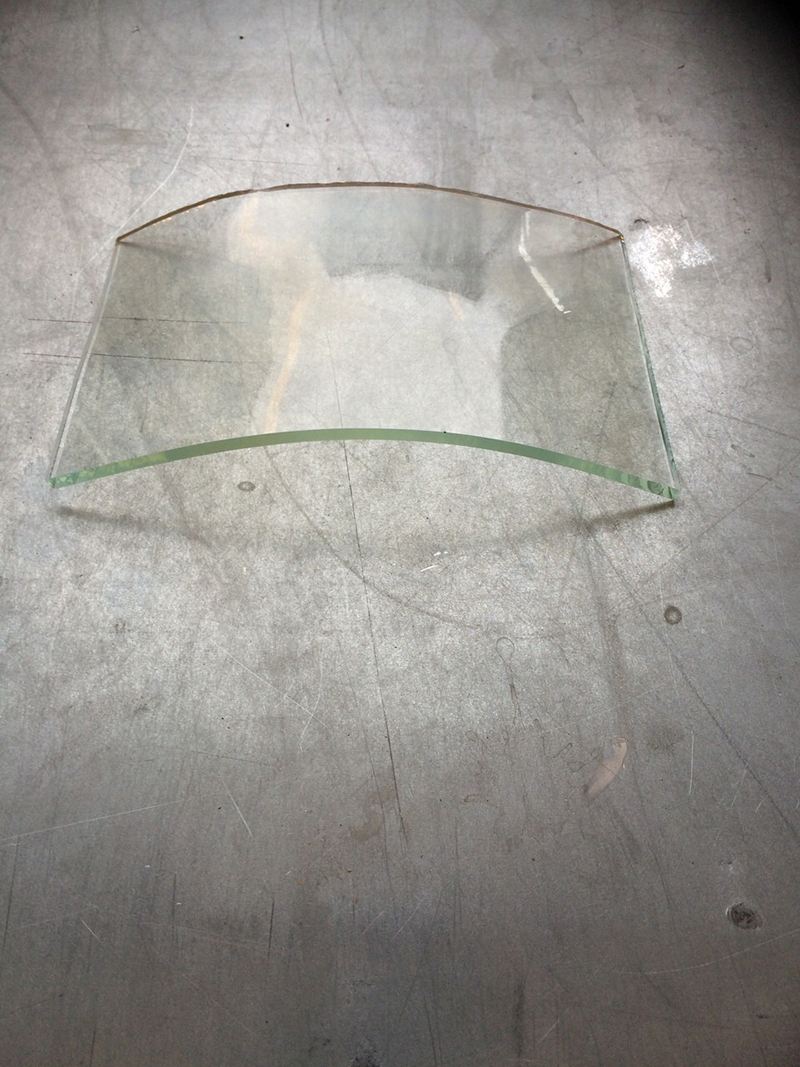 Before the start of the 3TU Lighthouse project, a small-scale prototype existed of the flexible mould for concrete, using a grid of flexible strips as interpolating surface. This prototype showed very promising results, but the team was curious to investigate scale effects and also manufacture larger concrete elements. A new and bigger prototype for the flexible mould therefor was designed and built in order to investigate the behaviour of the mould on larger scale (Figure 7). On a small scale effects like buckling of the strips in the interpolating surface are not likely to occur. For larger surfaces, though, this effect could potentially become more significant. The smoothness of the final panels is influenced by small details in the design of the mould. Dimensions and connections needed to be designed carefully to obtain accurate results. Apart from accurate the mould has to be robust to function well within a concrete factory environment. Simple, robust and easy to repair solutions are key to the success of the mould. A finished prototype was transported to a concrete factory in order to gain more experience in the production process. Based on these experiences a design for a professional version is made which will be used for first projects in practice.

The principle of deformation after casting brings along questions regarding the concrete: What is the right moment of deformation? What is the effect of the deformation? How can the concrete be reinforced? Apart from the design and assembly of the larger prototype, these aspects have been investigated as well in the PhD research of Roel Schipper that will be finished shortly. Finally, also a computational model has been worked out to predict the effect of certain parameter choices, such as actuator spacing, strip thickness and elasticity, etcetera. This work is on going and will need further development. 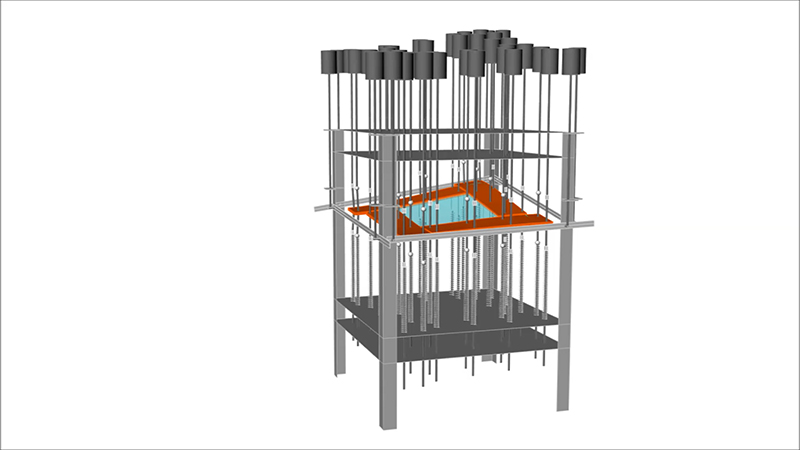 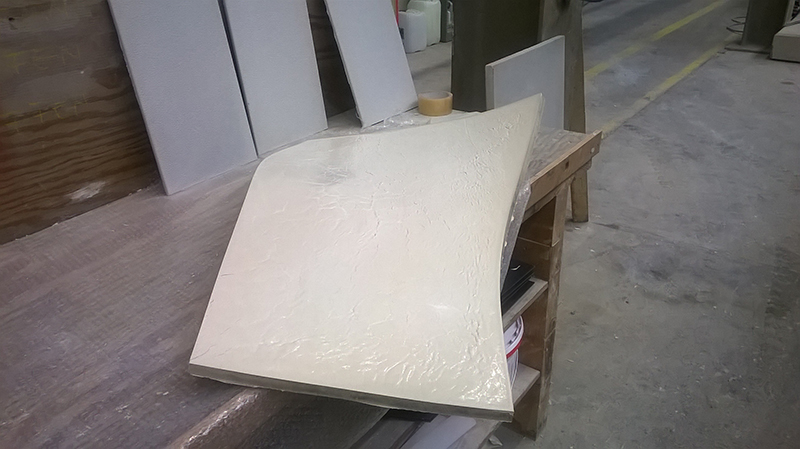 Instead of realizing a smooth interpolation surface, additional shape control or play with element texture could be realized by making parts of this surface inflatable very locally. This could result in architecturally interesting textures, and furthermore could lead to a technology that opens new possibilities. In his Master’s thesis project that was already on going at the start of the 3TU Lighthouse project, Mitchell Janmaat now had the chance to carry out some experiments with various inflatable mould surfaces. Figure 8 shows some results of this work. 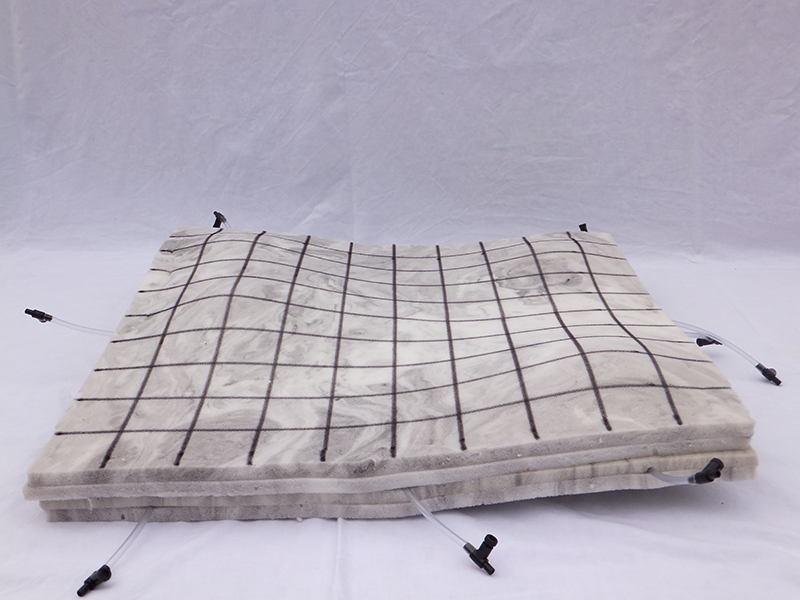 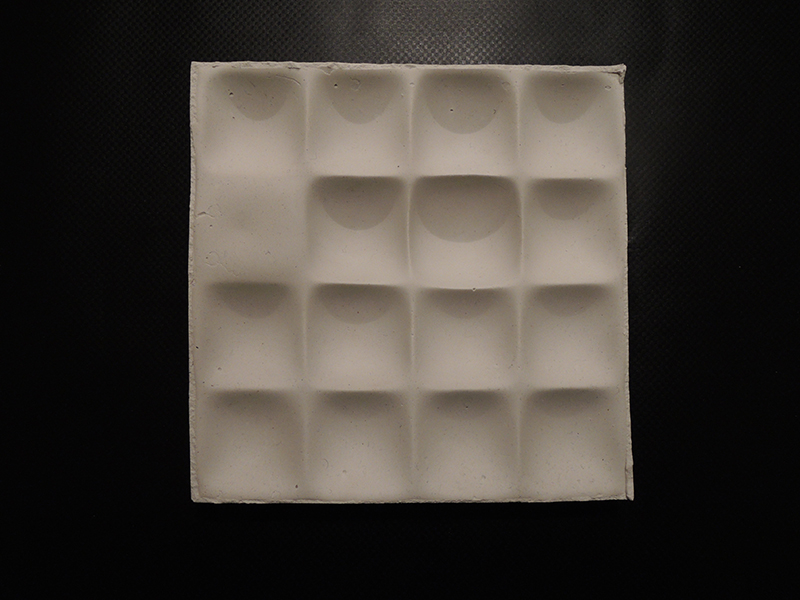 The 3TU Lighthouse project “Kine-Mould: material efficiency using a flexible kinematic mould system” has resulted in a range of coherent prototypes that demonstrate the feasibility of this manufacturing method for various architectural building materials. At the “Week van de Bouw” in February 2015, the prototypes will be shown. In the summer of 2015, more results and also elements produced with the moulds will be presented at the IASS2015 conference and exposition (see IASS2015.org Scientific publications will be written to give more in-depth descriptions of the results, including validation and testing. The work will be continue since many new ideas and possible solutions are waiting for further exploration as well as cooperation with industry. Further industrial partners are invited to contact us and discuss the possibilities.