The project set out to proof that a conventional optical fibre lighting system for highlighting the structure of a façade can be operated more energy-efficiently through the substitution of the projector using a metal halide reflector lamp by a laser. This is investigated by looking into the photometric assessment of such systems as well as the electric power draw during operation. In preparation for a potential exterior demonstration installation, an additional focal point of the research was the design and testing of a weatherproof case that provides protection to the laser and the ballast. The final stage brought the different aspects of the research together and resulted in a temporary experimental setup (pilot installation) in order to showcase the validity of this novel approach. 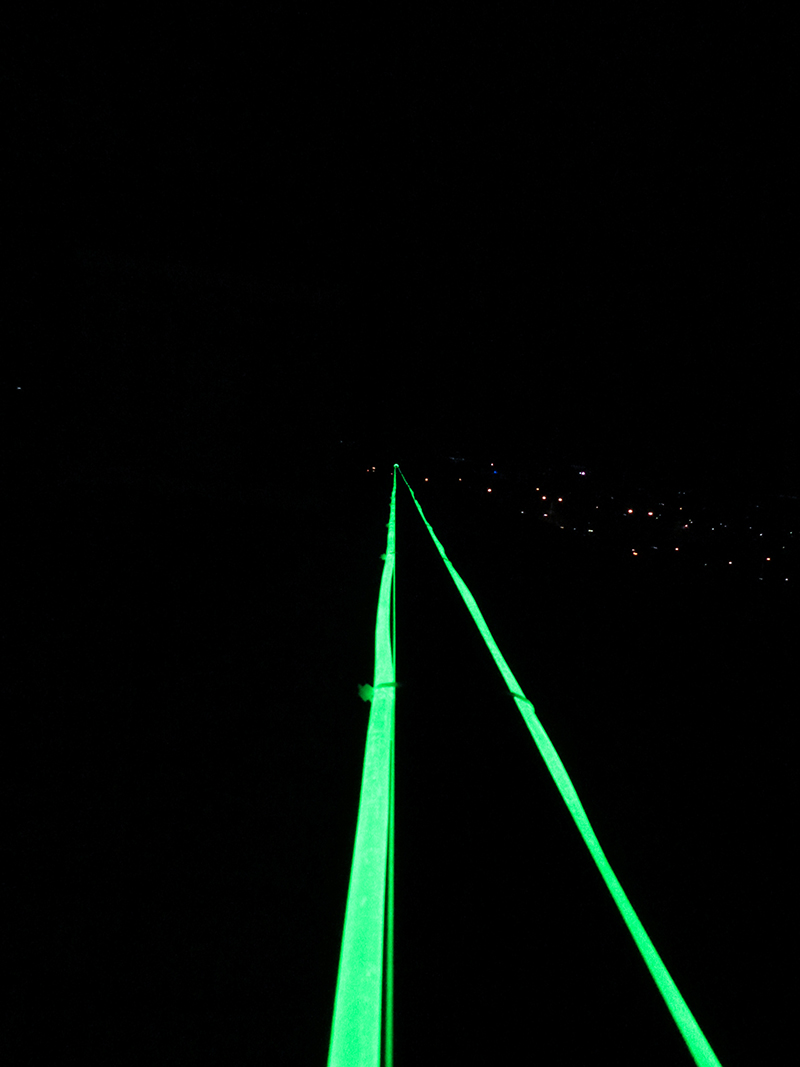 Throughout the project there was active communication between the partners. Meetings took place in Eindhoven, Delft, and Den Haag. At the TU/e two students were recruited to participate in the research project, and at both universities the possibilities for demonstration projects were explored. During the discussions, ideas for details on the overall approach and the setup were developed. The brainstorming continued with the students at their regular project update meetings. They developed the research questions and mapped out their approach in a measurement plan. The student project results were presented at an intermediate workshop and to the project partners.

The weather proofing of the box is being tested for its performance under various exterior conditions, using a climate chamber, by measuring: the interior temperature in the box, the humidity in the box, and the protection against simulated precipitation (snowfall and rain). After energy performance determination, the photometric assessment focused on two main sets of measurements; illuminance measurements indicating the relative luminous flux coupled out from the fibre and luminance measurements under different observation angles.The illuminance measurements were carried out along the fibre as well as around the fibre. This produces an indication over the attenuation of the extracted light and also the uniformity of the light extraction. The illuminance at a defined and constant distance is a measure for the relative luminous flux leaving the fibre. In addition to that, the luminance from different observing directions was recorded to evaluate the expected brightness perception. The photometric assessment was done for three laser types: red, green and blue. 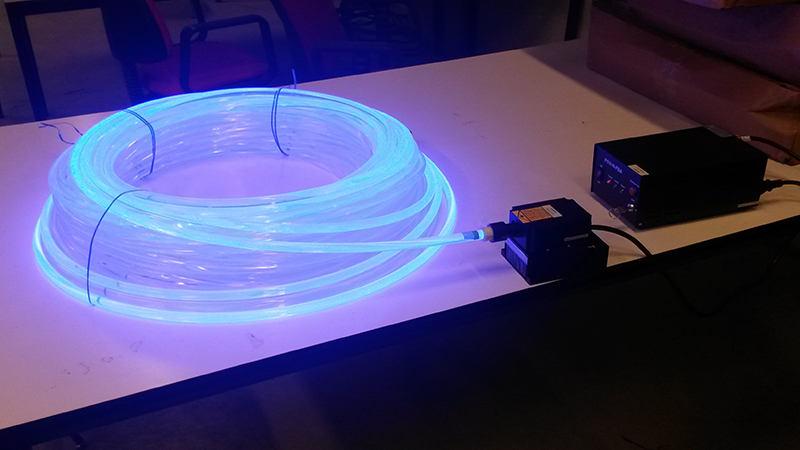 A BL Innovative Lighting fiber is connected to a metal halide (MH) lamp of about 190 W; either on one or two sides of the fiber. Currently, the maximum commercially available length of this fiber is 80 meters, and would require at least four MH lamps to light the full fiber length, with a total energy consumption of 764 W. However, if a MH lamp were to illuminate the fiber from a single end the maximum lenght would be about 13 meters (including visible light loss). With the laser installation, the power consumption over the first 15 minutes after starting the laser was recorded. The results for the three laser types tested are showing a stabilized power draw for the red, green, and blue laser of 59 W, 71 W, and 54 W respectively. The difference in power consumption of the least efficient laser system (2*71 W) compared to a system lit with MH lamps over a comparative fiber length of 80 meters would be five times lower (142 W vs. 764 W), resulting in a savings of approximately 80%.

The illuminance was measured at a constant distance from the fibre. This was achieved through the use of a device that was designed and built for this purpose. It can wrap around the fibre and holds the photo element in place. The measurement distance was approximately 1 cm to get the maximum dynamic range. The illuminance measurements are an indicator for the relative luminous flux leaving the fibre. Luminance measurements have been taken under different observation angles around a measurement point. The results give an indication on the brightness perception when viewing the installation from different positions. As a rule of thumb, differences in brightness occur when the luminance difference is approximately one order of magnitude. 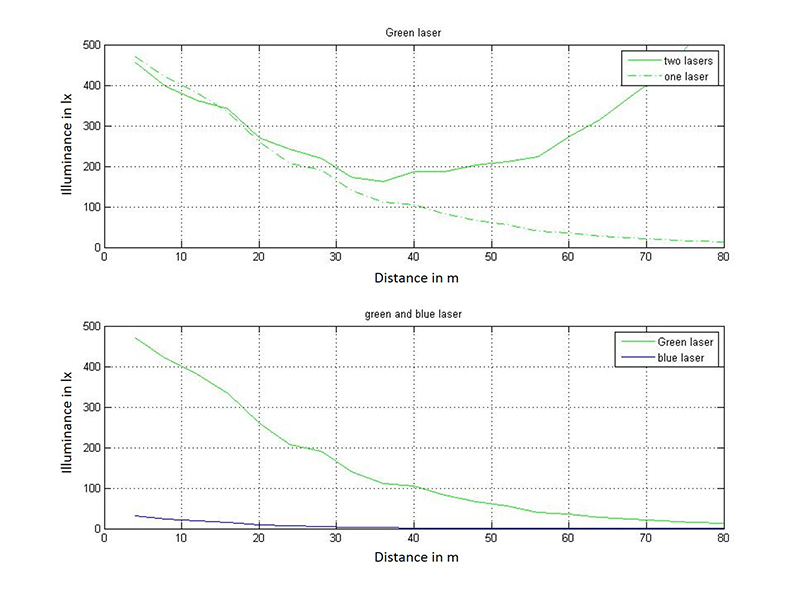 Measurement along the fibre

Measurement around the fibre

As a measure for the uniformity in all directions, the illuminance was measured on the four spots around the fibre every 8 m along the fibre (0, 90°, 180° and 270°). The most noteworthy non-uniform light extraction can be observed at the beginning of the fibre. This is likely caused by slight misalignments of the laser axis and the axis of the fibre that are believed to cause non-uniform light losses at the beginning

The luminance measurements were taken for two situations: the fibre being fed by one laser and the fibre being fed by two lasers. As expected, the luminance drops along the length in a similar manner as the relative luminous flux. This effect is reduced in a system fed by two lasers. The luminance is relatively similar for all viewing angles (ranging from 30° to 150° with 90° indicating the surface normal).  For a two-laser setup, the minimum luminance drops from approximately 200 cd/m2 to approximately 40 cd/m2. This drop is not leading to a perception of brightness difference according to the rule of thumb mentioned earlier. The laboratory measurements indicate that no visible difference along the fibre system would be noticed.

A working prototype of the laser/fibre system has been demonstrated on the roof of the Vertigo building on the TU/e campus in December 2014. The 80 m long fibre was installed along the inside and outside of a roof rail resulting in a 40 m long light installation that could be seen from the building as well as from the ground. 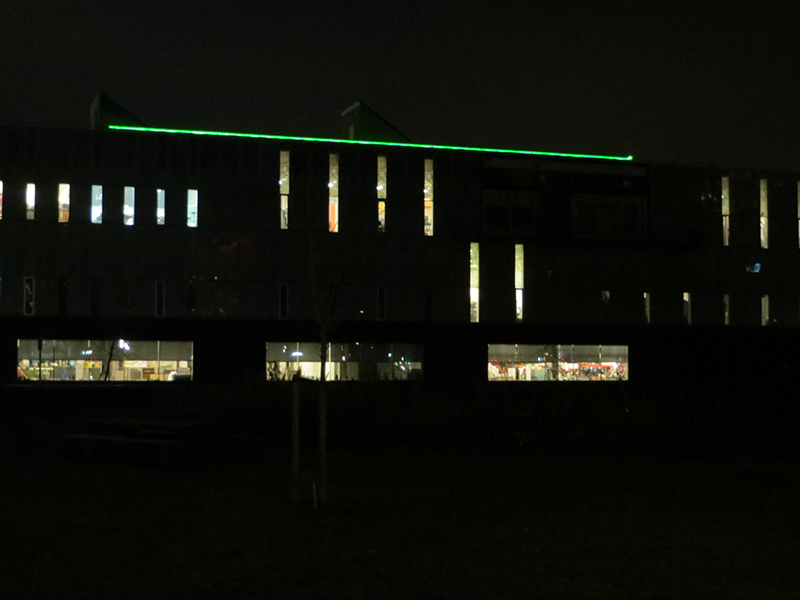 The results of this project show that the fibre system fed by lasers is a feasible technology to highlight facades of buildings. The photometric data shows that the system can be operated in such a way that no noticeable brightness differences can be sensed along the fibre. The energy consumption of the lasers are much lower compared to the conventional solution, resulting in a savings of at least 80%. This means that the investigated system is an adequate energy-efficient alternative to conventional fibre lighting systems.

The investigated system is an adequate energy-efficient alternative to conventional fibre lighting systems, resulting in savings of at least 80%.

Recommendations for the future include following technology developments to see if such laser systems can be reduced in size for a better integration into the overall system. The current laser system was not developed for a fibre lighting system but rather for measurements/experiments on optical benches. Some of the features and requirements that are currently part of the product may not be required for usage in combination with fibre optics. This can lead to a reduced size and cost for a laser system that would positively impact the economics of real installations.