The DoubleFace project aimed at developing a new product that passively improves thermal comfort of indoor and semi-indoor spaces by means of lightweight materials for latent heat storage, while simultaneously allowing daylight to pass through as much as possible. Specifically, the project aimed at designing and prototyping an adjustable translucent modular system featuring thermal insulation and thermal absorption in a calibrated manner, which is adjustable according to different heat loads during summer- and wintertime. The output consists of a proof of concept, a series of performance simulations and measurement and a prototype of an adjustable thermal mass system based on lightweight and translucent materials: phase-changing materials (PCM) for latent heat storage and translucent aerogel particles for thermal insulation.

Lightness and translucency are achieved by means of the applied materials. Instead of using heavy and opaque materials like concrete, a novel application of PCM and aerogel is proposed. Several products and technical systems are currently available on the market for applying PCM by integrating them into walls, containers, or ventilations systems or in facades. Double Face proposes a system based on interior design elements, taking advantage of the dynamic behaviour of PCM as well as its appearance. As such, the system is also meant to contribute to aesthetical design criteria in the design of interiors. The elements are translucent; are meant to be located in front of a (full) glass façade, where the largest heat impact from outside happens to be; and can be developed into various design options for new buildings as well as retrofitted into already existing buildings. Additionally, the system is adaptive in order to enhance the thermal benefits. Exposing thermal mass to winter solar radiation (passive heat gain) and protecting it from the summer one (passive cooling) and therefore acting as thermal buffer. This happens by rotating the elements towards the source of incoming heat or the sink for heat release. In winter, the PCM side would face the exterior and be thermally charged during the day by the low winter sun. During night times, oriented towards the interior, it releases the accumulated heat. In summer, during the day in combination with external sun shading, it would store the heat from interior heat loads and during the night release this heat to the outside environment by means of night ventilation, thus acting as a cooling plate. 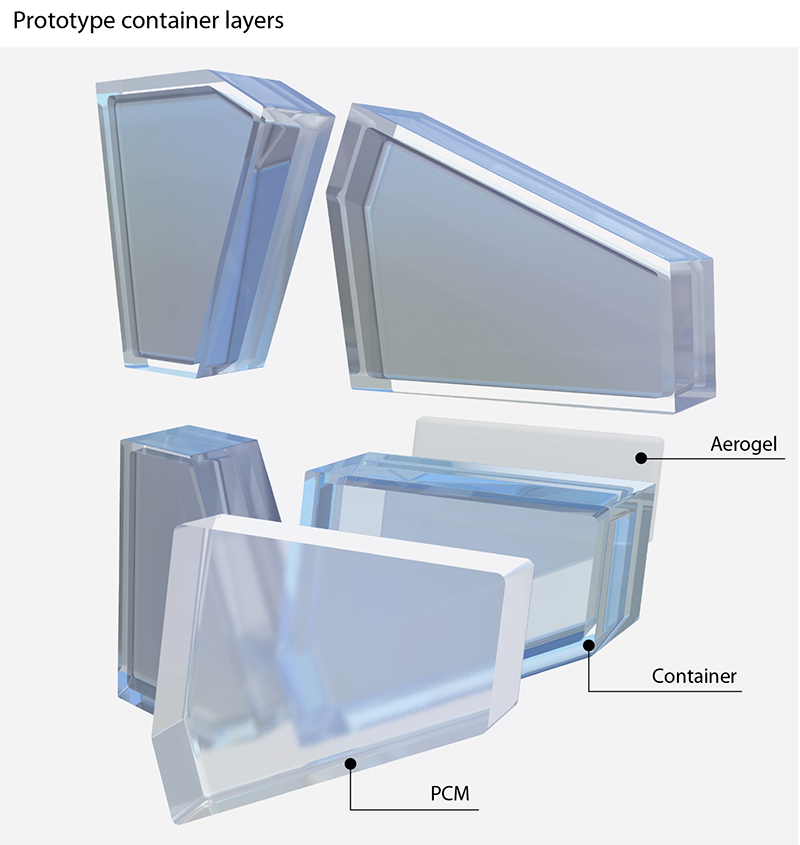 The adjustable Trombe wall system leads to an energy reduction of roughly 40%.

The research process started with a wide inventory of existing PCM; an analysis of their properties; and a consequent short-list of selected materials. For each of the selected PCM, digital simulations were conducted to analyse the thermal behaviour. They were conducted for single layers of PCM in various thicknesses; and for combinations of two layers, one of PCM in various thicknesses and one of translucent insulation, also in various thicknesses. The translucent insulation was simulated as a layer of Aerogel; and as a system of cavities trapping air within a translucent 3D printed material. Based on the digital simulations, the system of layers was pre-dimensioned for a total thickness of 7cm (5 cm PCM, 1 cm aerogel and 1 cm container wall thickness). Several samples (17x17x7cm) were made for a number of selected PCM. These samples were tested in the laboratory for Building Physics at Eindhoven University of Technology for their thermal behaviour; and at Delft University of Technology for their light transmittance. The measurements allowed for finetuning the dimensions as well as for narrowing down the list of selected materials. As a result, PCM thickness was reduced to 4 cm. Furthermore, using the measured properties as input, simulations of the thermal behaviour of a standard room equipped with this Trombe wall system were run in DesignBuilder to study several variations including PCM layer thickness, insulation layer thickness, extra cavities and percentage of holes in the wall. These simulations showed that an opening percentage of roughly 10% was ideal for this Trombe wall system. Because of the limitations of simulating the rotation of the wall panels, a new simulation model was developed in Matlab/Simulink. These new simulations, which included the rotation, showed that the adjustable Trombe wall system leads to an energy reduction of roughly 40% as compared to the ‘no Trombe wall situation’. 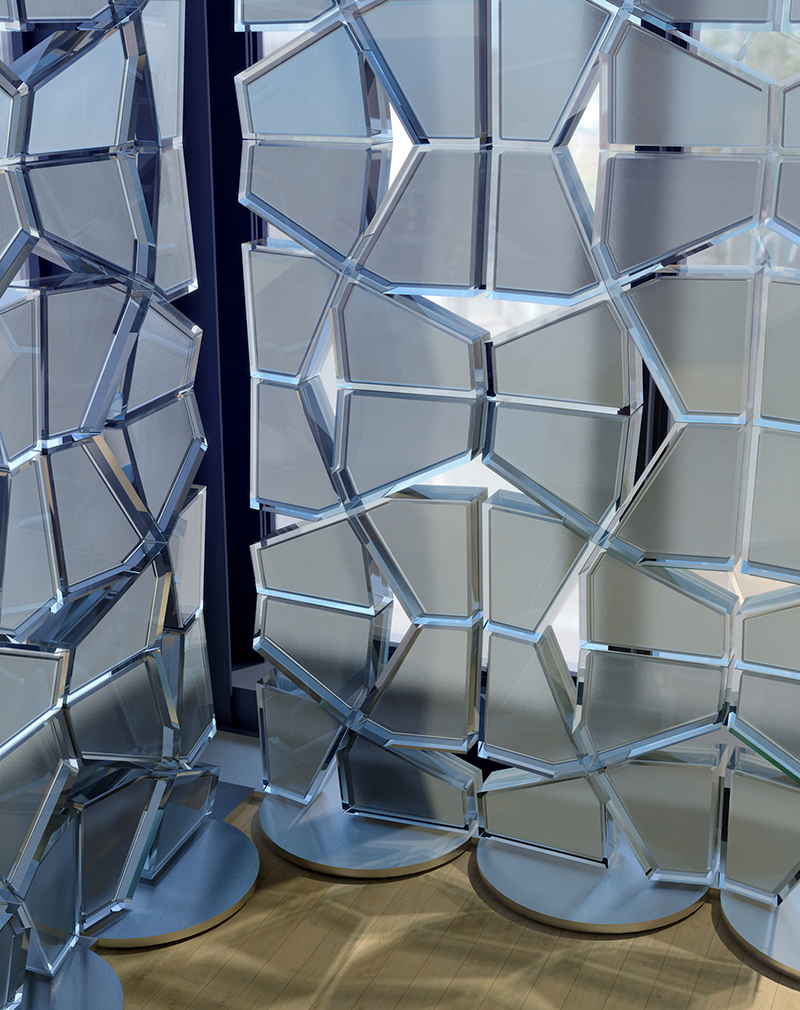 Parallel to the research, a number of design alternatives were drafted, based on the thermal principles. For this project, one design option was chosen to be developed and prototyped. The option shows the potential of exposed technical systems contributing to aesthetical design criteria within interior design, while remaining within feasibility constraints in order to realize a prototype within the timeline of the project. To realize the prototype, the translucent container for the layers of PCM and insulation, additive manufacturing was considered initially, in order to cope with the complexity of the form. A number of tests were made by 3D-printing translucent PLA and PET via the rather cost effective filament fused deposition modelling (FDM) method. However considering the challenge of obtaining translucent parts that have high structural strength and maximum light transmittance without the need of falling back to expensive 3D printing techniques (like Stereolithography), additive manufacturing was later used only to produce moulds to cast transparent resin, in order to get a more glass-like appearance. An option for a laser-cut transparent sheet of Perspex was developed, leading to satisfactory results as well.

The thermal behaviour of the prototype is now being measured using heat-flow sensors and thermocouples at Delft University of Technology. Additionally, further performance simulations are being run in order to model the behaviour of the modular and adaptive system under different climate conditions and in various room environments. Current simulations include fine-tuning of the rotation schedule of the elements in order to orient the insulation according to contingent conditions (day/night – winter/summer).

The ambitions of the team include tuning this prototype and exploring other design alternatives, for which further development and testing are intended. A number of companies have been contacted during the process especially regarding existing PCM and their architectural applications.