3D printing techniques for the building industry are developing fast. Concepts like Contour printing, concrete printing concepts of the TU/E and D Shape are examples. Despite the range of techniques is broad (and vary from a large gantry system, to a supersized Delta printer for example), many of the developed 3D printing machines are constraint in their movement. Mobile 3D printers however show advantages in flexibility, as they can move outside the constraint of a large 3D printer and they can move in the highly unstructured and hazardous environment of the building site, which can be dangerous for people to work in. The Institute for advanced architecture of Catalonia developed vehicles, which they call minibuilders, each designed for a special task in the building process, printing the foundation, printing a wall, smoothing the outer-wall etc. The minibuilders are used in succession according the building process. However they are still limited in their autonomy and capability. The minibuilders are tethered with a hose to a vehicle, which carries the concrete supply. 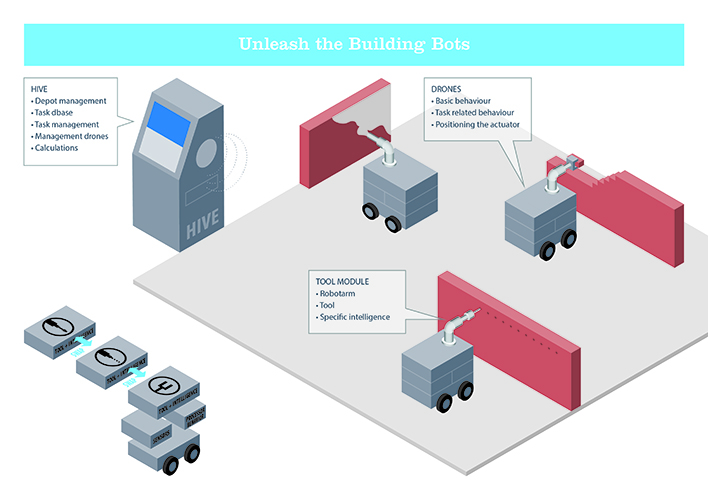 To develop autonomous agent-based robots, which are not constraint in their reach and which have the capability to work together.

In this research we will look for the possibility to develop autonomous agent-based robots, which are not constraint in their reach and which have the capability to work together. The robots will decide how and with how many other robots they will do the job. Autonomous robots are robots that can perform desired tasks in unstructured environments without continuous human guidance. Each robot has a list of components, which it can print with the basic material. Together the robots calculate how to solve a 3D print task and how many must/can help. If one robot needs to refuel or needs to get additional printing material, the others distribute the tasks between them so the job will continue.  When returning to the building site the robot can choose to join in or perform another task. The robots need to know when to “refuel” and to refill the basic extrusion-material from a centralized point. In summary each robot must have at least the following capabilities: 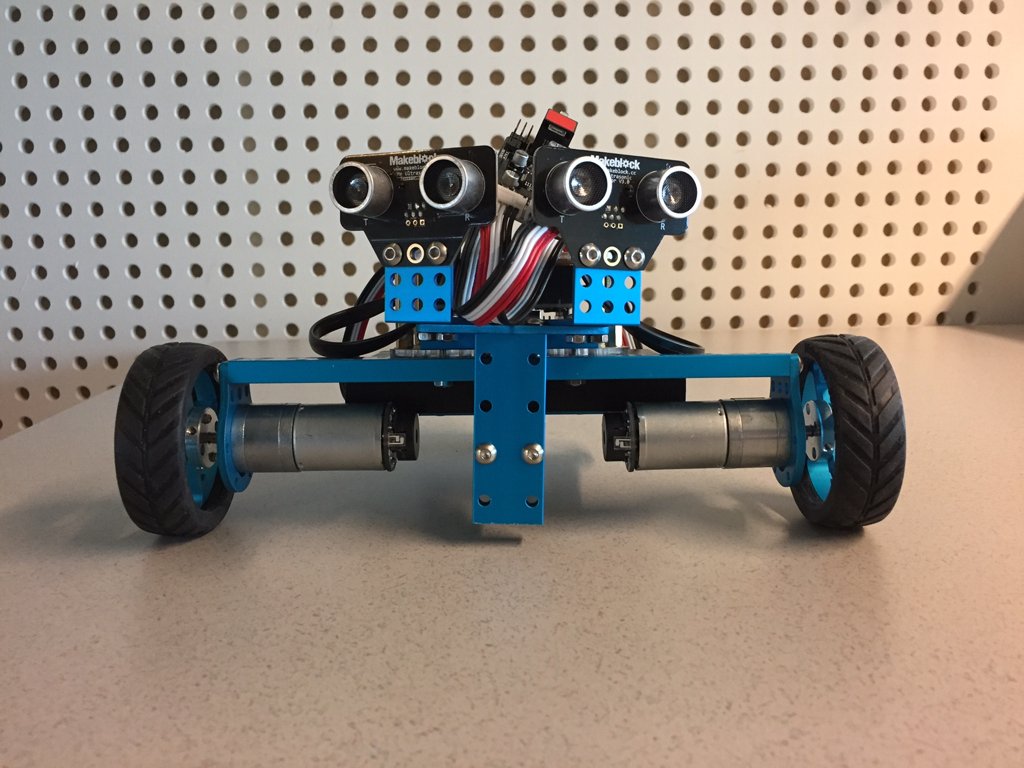 In order to keep the weight of each robot low, it can only carry a limit amount of concrete. So the extruded walls must be light weighted. For the project a new type of nozzle was developed, which can print the two side plates and the wall infill in one step. This type of wall has also a higher thermal isolation than solid walls. 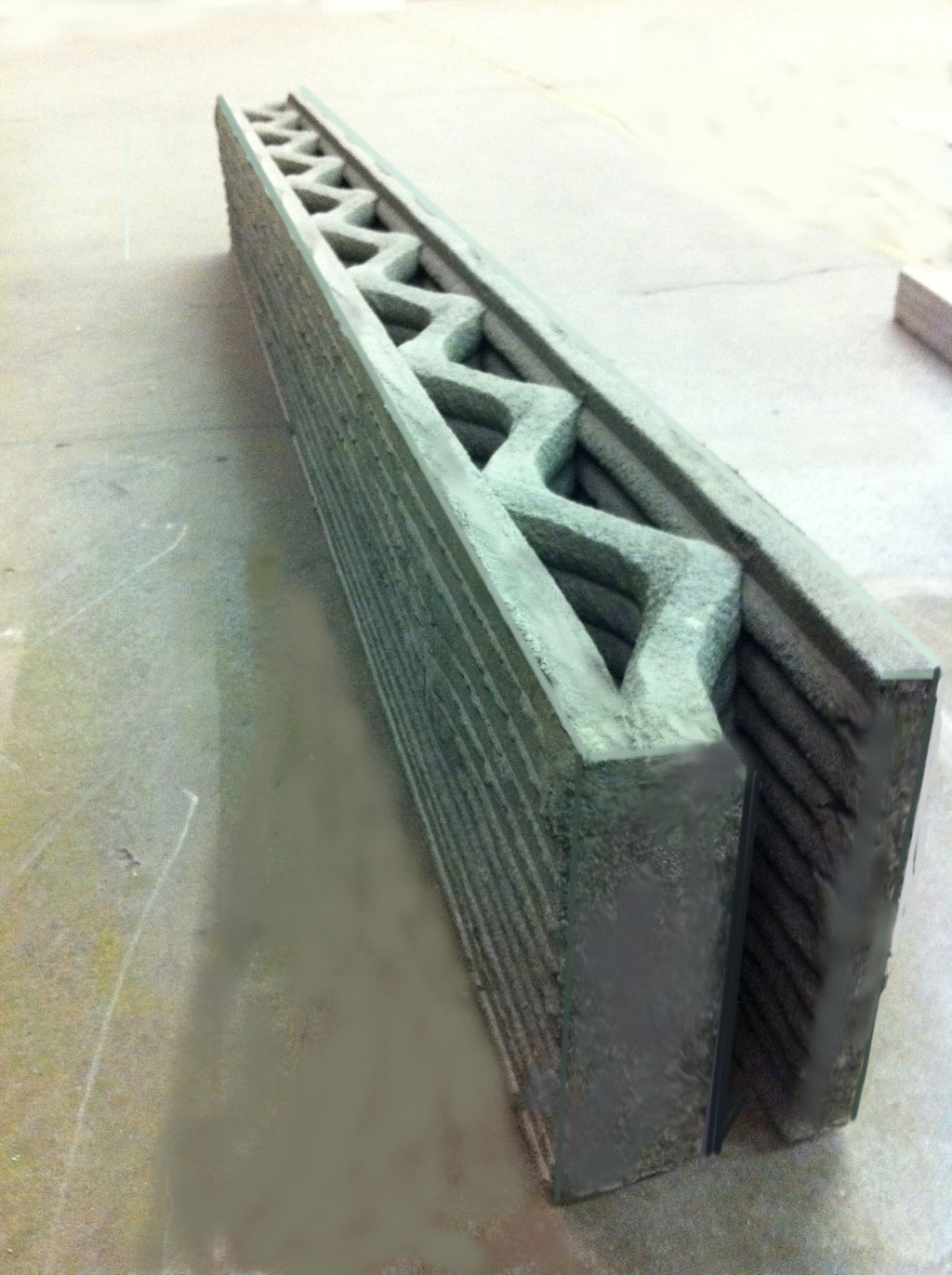 A problem that still has to be solved is the “climbing”. The building bots must be capable of climbing a wall in order to reach the location where it has to print, or climb down a wall in order to go to the hive for refilling its concrete supply.

Each building bot has a microprocessor as it’s mind and is connected to the hive by Bluetooth.  The microprocessor can be programmed to round obstacles which the building bot will encounter on its path to the hive or work location. It knows its location on the site by calculating its orientation by means of the difference in speed between left and right wheel and by comparing its location to the line between starting point (= hive) and endpoint (= work location).

Each building bot has a microprocessor as it’s mind and is connected to the hive by Bluetooth.

The building bots can, besides printing, also be programmed to perform other tasks. Therefor a small industrial robotic arm or other tools can replace the printing nozzle. When other tools are mounted on the builderbot, it can perform some simple tasks at, for people, hazardous locations. 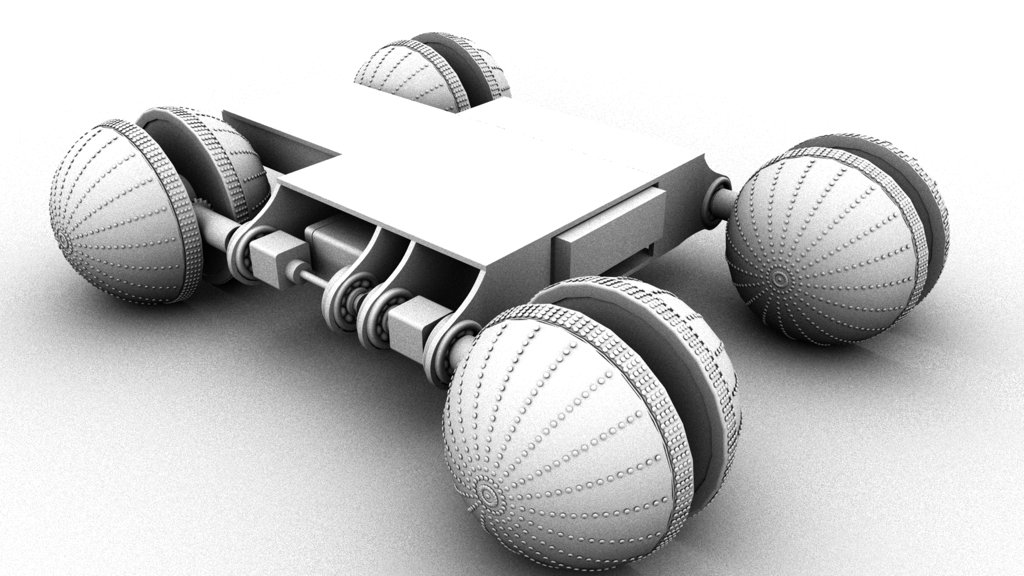 HomeProjectsUnleash the Building Bots
View all