The majority of the existing bridges in the Netherlands and in Europe was built between 1950 and 1970. These bridges – often key nodes in the transportation networks – not only reach the end of their design life, but were also designed based on assumptions and requirements that no longer reflect the traffic loads as laid down in Eurocode (EN 1992-2) and NEN-Norm (NEN 8702). According to these norms many bridges are structurally deficient. However, the calculated structural behaviour of the bridges does not necessarily correspond to the actual structural behaviour. In other words, bridges might be replaced or reinforced that do not require any substantial structural intervention. Structural health monitoring (SHM) systems can help in providing information about the actual structural behaviour and risk of failure of bridge structures that allows asset managers to plan interventions that are just in time and just enough. The expected benefit is a considerable reduction of intervention costs and traffic disturbances, and an increase in safety.

However, previous generations of SHM systems have hardly found their way into the daily asset management practice of infrastructure agencies, due to high costs, high installation effort, and insufficient data processing for the direct evaluation of bridge reliability. With the advent of low-cost sensors and the development of response estimation algorithms, the potential for a new generation of SHM systems (SHM2.0) has emerged. Nowadays, SHM2.0 techniques are already being implemented for monitoring fatigue damage of offshore wind turbines, but have not yet been applied for bridge monitoring. 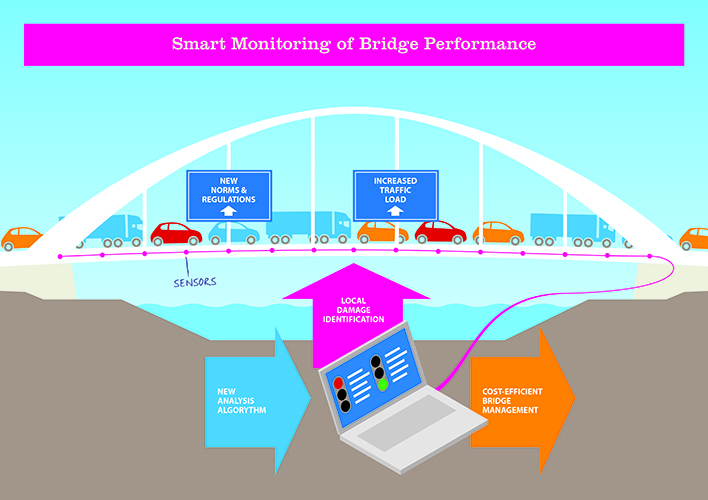 The aim of the project is to demonstrate the potential of SHM2.0 systems for bridge monitoring by combining a relatively simple structural bridge model (finite-element model), a recently proposed innovative response estimation algorithm for the early detection of changes in structural behaviour, and an easily installable and low-cost sensor network consisting of a limited number of micro-electromechanical (MEMS) accelerometers to acquire the necessary data on bridge vibration. The proposed SHM2.0 system facilitates continuous monitoring of a bridge structure on the basis of relatively simple structural models, a novel sequential response estimation methodology, and cost-effective data acquisition. The monitoring is not affected by operational and environmental variations and expensive installation effort, which inhibited the first generation of SHM systems.

The system will be installed and tested on a steel bridge, for which renovation work is planned in 2016. First, it will be shown that on the basis of an easily-installable sensor network and the response measurements at a number of sensor locations, the response at other sensor locations can accurately be estimated. Second, by continuously monitoring the response before, during and after the renovation works, changes in the structural behaviour will be identified. This combination of tests will be used to prove both the capability of the SHM2.0 system to estimate the response throughout the structure and its cost-effective applicability to detect changes in structural behaviour, and therefore the occurrence of damage. The intended project connects theme 4 and 5 of the Dutch National Science Agenda.

The projected tangible result of the project is a prototype of a SHM2.0 system for bridges that demonstrates (i) the applicability of a low-cost sensor network for acquiring sufficient data (quality) on the dynamic behaviour of bridges, and (ii) the validated estimation of the change in structural response of a bridge - implying real structural changes, which allows for the prediction of structural damages. This estimation only requires an easy-to-use structural model and the application of a novel damage detection algorithm.