There is still very little known on the energy efficiency of post-war neighbourhoods, and even less on the contribution of private efforts to raise energy savings through the transformation of their buildings.

Energy efficiency is a priority to many cities, with programs being implemented to stimulate energy savings in the built environment. Cities aim to reduce carbon footprint, but also to cut energy costs. This has led to urban renewal developments, where neighborhoods were demolished and replaced by new neighborhoods, assumingly more sustainable. Some neighborhoods built during the post-war period are now under trial for their poor materialization and energy inefficiency. Though, they are also the massive expression of a rising idealism from the 20s and 30s, where public officers and professionals, as urban planners, architects and engineers had the opportunity to give the working class a larger, healthier and greener living environment. The demolition of these neighborhoods is accompanied by problems such as waste of resources, social segregation and cultural loss. Instead, the main energy and CO2 saving potential lies in the existing building stock (Petersdorff et al, 2006; Energy DG, 2013). Transformations can save not only energy costs, but also embodied energy. When it comes to heritage-designated buildings special attention should be paid to the preservation of their heritage values (Godwin, P. J. 2011; Alev et al. 2014). Their existence is not only embodied energy and carbon emissions, but also the spirit and identity of a community (Godwin, P. J. 2011). 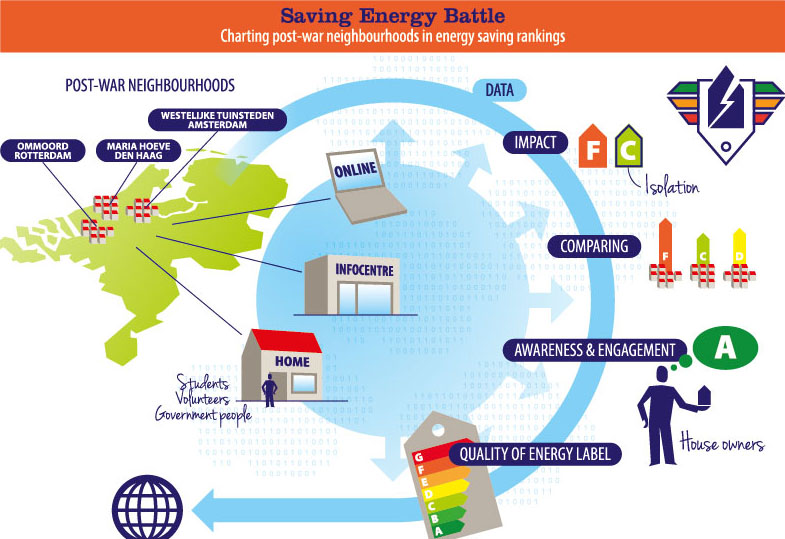 There is a growing body of knowledge on energy efficiency in the built environment, though, primarily derived from samples (Murphy, 2014), models (Melo et al., 2014), and/or buildings owned by housing associations (Nieboer et al., 2012). There is still very little known on the energy efficiency of post-war neighborhoods, and even less on the contribution of private homeowners’ efforts to raise energy savings through the transformation of their buildings. Yet, their transformation patterns can feed the debate and help determine the energy efficiency of buildings and post-war neighborhoods. A framework for energy performance certification, as the Energy label, provides information on the energy efficiency of buildings, but also enables energy savings to be determined and forecasted. It also systematically records information about the building stock and its transformation. There is great criticism on the reliability of the Energy label, particularly on the new process implemented in the Netherlands since January 2015. Though, being an international framework (EC, 2015), there is great potential to keep developing it into a reliable global monitoring tool.

The potential of post-war buildings to raise energy savings is largely underestimated since the results show that energetic improvements are achievable.

This research focused on unveiling the role of historical buildings, and those designated as heritage in particular, in raising the energy performance in three Dutch cities. Results reflect the correlation of three research questions, aiming to identify and classify historical buildings on their heritage designation, energy performance and building transformations. Dwellings are taken as case study, and private owners in particular, as they are now leading the new energy certification method. The correlation between the available data was made possible due to the common construction unit, based on the BAG (Basic Administration Addresses and Buildings). Buildings are distinguished according to their heritage-designation, as global (UNESCO World Heritage), national and municipal. The Energy label was used to derive the energy performance, as well as, the transformation rate, through the alteration of the Energy Label over time. And finally, more information about building transformations, such as the rationale to implement them, was gathered during the event 3TU Saving Energy Battle (sEB).

The sEB took a first step in this global monitoring tool (http://savingenergybattle.nl/), by testing this new process of energy performance certification (Definite Energy label), in three post-war neighborhoods of Dutch cities: Westelijke Tuinsteden, Amsterdam; Ommoord, Rotterdam; and Mariahoeve, Den Haag. This monitoring tool was organized as a live event where the staff and students from TU/e and TUDelft, as well as, volunteers teamed up to assist building owners to upload the requested information. The sEB was won by Den Haag (127), followed by Amsterdam (118) and Rotterdam (62). The results were shared and disseminated in a publication prepared by both universities. Previous to the event, the website offered short courses, created to ease the submission process. Nowadays, the website offers the timeline and outcomes of the sEB project.

Through this research the Energy label has been successfully used to monitor the energy performance and transformation of buildings at large scale. It enabled us to compare and distinguish cities to neighborhoods, and historical to modern dwellings. Findings showed that post-war neighborhoods have worse energy performance than their cities as a whole, evidenced by 20% less green labels. Historical dwellings have on average a lower energy performance than modern dwellings, which is more evident at neighborhood level with an average of 10% less green labels.  Historical dwellings in post-war neighborhoods are lagging behind compared to their transformation at city level, with around 20% less dwellings transformed. The results are more evident when analyzing the case of Mariahoeve.

The energy label should be seen as a potential tool, to monitoring buildings on their energy performance, determining the impact of building transformations and underline potential areas of transformation. Post-war neighborhoods were built due to a housing shortage leading to a massive production of dwellings with similar characteristics, technical and cultural wise. Therefore, identifying the main sources of energy waste, solutions can be address at building level but applied to a bigger ensemble (block or neighborhood), enhancing the energy performance of the whole area and preserving its identity. Yet, these actions demand a close collaboration between the various stakeholders such as developers, corporations and most important municipalities (Bijlsma et al, 2008)

The potential of post-war buildings to raise energy savings is largely underestimated since the results show that energetic improvements are achievable, 77% of these dwellings were transformed and 11% achieved green labels. On average 41% of the measures studied were applied, in most cases this consisted of around 80% glazing, heating and tap-water systems. Without severe actions in the built environment the energy demand will increase 50% by 2050 (GNP, 2013). Therefore, urban planning and architecture should become stricter on how to best transform the built environment towards sustainability, including renovations and heritage-designated buildings, as findings showed that their transformation is possible and happening, though with only few energy saving measures and not on their full potential.