The application of structural glass as the principal material in restoration and conservation practices is a distinguishable, yet discreet approach. The transparency of glass allows the simultaneous perception of the monument at both its original and present condition, preserving its historical and aesthetical integrity. Concurrently, the material’s unique mechanical properties enable the structural consolidation of the monument. As a proof of concept, the restoration of Lichtenberg Castle is proposed. Solid cast glass units are suggested to complete the missing parts, in respect to the existing construction technique and aesthetics of the original masonry. Aiming for a reversible system, the glass units are interlocking, ensuring the overall stability without necessitating permanent, adhesive connections. This results in an elegant and reversible intervention. 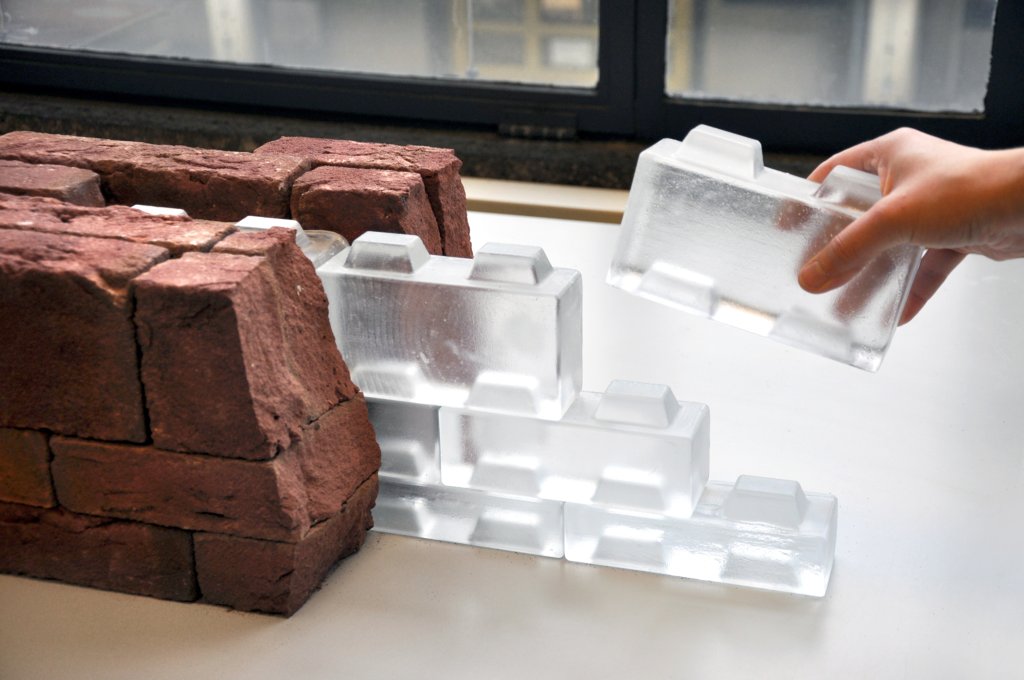 This research investigates the potential of structural glass as a principal material in restoration and conservation practices in order to highlight and safeguard our built heritage; a distinguishable, yet discreet approach. Current restoration treatments with traditional materials bear the risk of conjecture between original and new elements, while the ambition to enhance the structural integrity of the endangered structures, often results in visually invasive and irreversible solutions that can impair the authentic image of the monuments. In this context, glass could be the answer to this on-going debate between restoring and preserving, a promising restoration solution able, on the one hand to consolidate the historic buildings and on the other hand to reveal their stratification. The transparency of glass enables the simultaneous perception of both the original and ruinous state of the monument, giving a material and immaterial appearance that relates the structure to both the past and the present setting. But equally important, owing to the mechanical properties of glass, the glass addition can contribute to the structural preservation of the monument.

The transparency of glass allows the simultaneous perception of the monument at both its original and present condition, preserving its historical and aesthetical integrity.

As a case study, the restoration of the Lichtenberg Tower in Maastricht is proposed. The Lichtenberg Tower - the oldest castle ruin in the Netherlands - has undergone numerous phases of destruction, decay, rebuilding and renovation in the course of eight centuries. The scars of time and human intervention are evident in the monument’s brickwork which forms a beautiful collage of different materials and building rhythms. Last century’s reinforcement and preservation acts, however, burdened the monument with a prevailing steel structure- alien to its nature.

In this proposal, all foreign elements such as steel anchors, rods, and staircases, as well as the contemporary brickwork, are removed in favour of glass components that fill the missing parts and prevent the monuments’ walls from drifting apart and collapsing. The innovative contribution of this glass restoration approach, besides allowing for a transparent addition, lies in the development of a completely reversible system, complying with the conservation guidelines suggested by the Venice Charter. To avoid any permanent bonding between the existing structure and the glass intervention, dry connections are proposed between the glass and the historic matter. Solid cast glass units are suggested, in respect to the existing construction technique and aesthetics of the original limestone masonry, to reinforce the monument by replacing the missing parts. To ensure the overall stability of the façade, the cast glass units follow an interlocking geometry, sparing the necessity of permanent, adhesive connections. The high stiffness and compressive strength of glass result in a lightweight glass wall of minimal thickness that ensures the desired structural consolidation without burdening the monument.

Different interlocking systems were explored to conclude to the optimum shape. As a proof of concept, the interlocking units are cast in the TU Delft Glass Lab, resulting to a 1:2 scale prototype. The aesthetic value of this solid cast glass interlocking masonry is articulated with glass elements resembling the original stone texture, while at the same time allowing for the perception of the surroundings. Three different sizes of bricks are designed to follow the gradient of different masonry styles, as this has been formed over the centuries. To evaluate the degree of cooperation of the units, testing in shear has been performed, manifesting the potential of the dry-assembly system as a compatible and elegant design approach for the preservation of our heritage. For the safe dry-assembly of the glass bricks, a transparent PET interlayer is proposed,  specially thermoformed to match the interlocking surface. 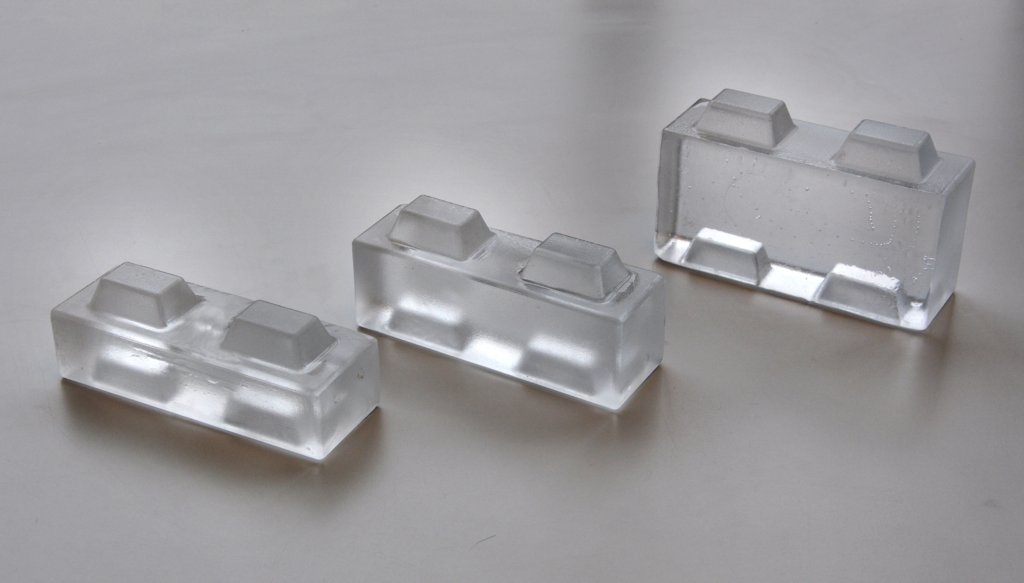 The connection between the glass masonry system and the historic wall is also designed to be discreet and reversible and any use of adhesives is prevented. Various scenarios were evaluated and tested in full scale prototypes, concluding to the proposal of a connective element that matches the exact shape of the wall on one side, and the interlocking geometry of the glass bricks on the other. Steel rods are anchored at key locations along the cracked historic wall in order to fix the special connective elements. The crack of the monument is 3D-scanned by a FARO® Focus phase difference laser scanner and the obtained pointcloud is converted to a 3D model. Based on this accurate 3D model, the connectors are developed. The connective components are proposed to be 3D-printed in plastic or 3D-milled in wood, in order to achieve accuracy, but more research is to be conducted to determine the most optimum material choice.

Regarding the interior of the monument, an all-glass ascending path to the top of the tower is created using float glass components. The transparent staircases and floors result to the least intrusive visual impact. The overall approach respects the rich history of the monument and highlights it, in a discreet transparent manner.