By placing these sensors into the asphalt mixture, temperatures and pressures can be measured during laboratory testing and construction, but also during usage and maintenance of the road where additional RFID sensors can be added to measure weather conditions and other long-term parameters.

This project set out to prove that Radio Frequency Identification (RFID) sensors can be used to monitor, to begin with, compaction temperature and pressure during the asphalt construction process and afterwards during a typical life cycle of the paved asphalt layer. Several RFID sensor manufacturers have suggested that the technology is robust enough to be applied in the rather harsh asphalt construction environment.  If it is and if sensors become small enough (“smart dust”), it will become possible to store all relevant composition, construction and performance data on sensors in the asphalt. It would revolutionize pavement management by having the information available “on the spot”.  By having car sensor data linked to pavement locations and sensors, a smart road that actually signals when repairs are needed becomes feasible.

The aim of this LightHouse project was to see if the sensors are indeed robust and small enough and to find out if they could be used in practical applications. We started by firstly finding temperature and pressure sensors that could withstand the high asphalt mix temperatures and heavy pressures of roller compactors and the resulting shear stresses between aggregates. The sensors were then to be tested in two laboratory and two site testing phases. 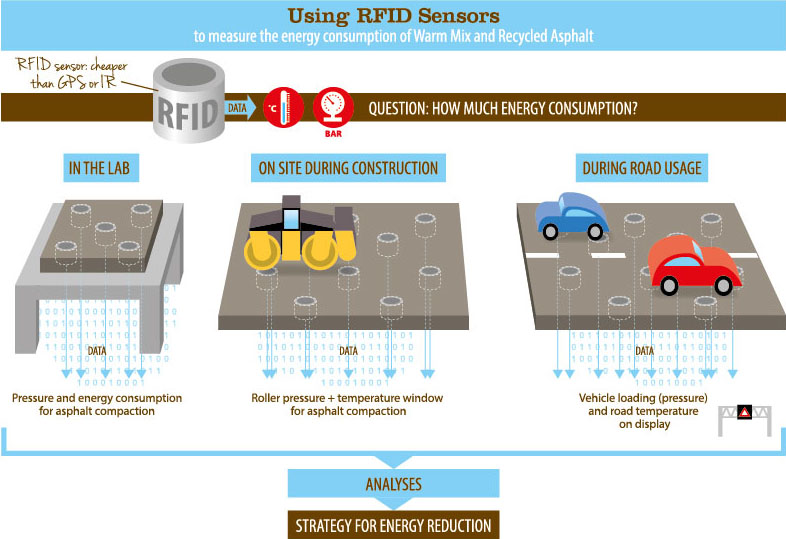 It would revolutionize pavement management by having the information available “on the spot”.

Finding appropriate sensors
Asphalt construction is an intensive process where sensors will have to survive high asphalt temperatures and compaction pressures during paving and compaction. A desk study and initial contact with several RFID manufacturers highlighted a first challenge. While several RFID temperature sensors were found to be suitable for possible use in asphalt applications, few suitable pressure sensors were found. A choice was therefore made to test passive RFID temperature sensors given that they are wireless, make use of an external energy supply (reader) and are relatively inexpensive when compared to active sensors.

Sensor placement in asphalt layers
A huge challenge turned out to be the placement of the sensors in the asphalt layer so that it remains stable during measurements. Anchoring was trailed in asphalt slabs including fixing it to plates, testing mastic asphalt mounting blocks and using bitumen strips. Anchoring success was measured against displacement, tilt, compaction and pressure against the sensor. The placements were tested using a gyrator and a hand-held roller compactor. A multi-criteria analysis showed the mastic asphalt blocks and bitumen strips to be most suitable for mounting the sensor in the asphalt layer.

Vehicle load simulator tests
The Road and Railroads Research Laboratory of Delft University of Technology has a linear accelerated testing facility, LINTRACK. Since no suitable pressure sensor could be found, work at the facility focused on the integration of the temperature sensor into the measurement process. The limitations of the RFID technology became immediately apparent given that the loading machine is located inside a temperature control room and has to be completely closed during testing. The reader’s limited reach resulted in no measurements being able to be undertaken in real time. For field applications this means that the road needs to be closed to traffic to take readings, which seriously limits the applications. The sensor was, nevertheless, able to withstand the heavy vibrations and harsh environment of the LINTRACK facility evidenced by the successful temperature measurements taken afterwards and with no apparent damage to the sensors during testing. Also, in this project the sensors are placed underneath Hot Mix Asphalt (ZOAB) and they withstood those temperatures without damage.

Project Enschede – long term temperature monitoring
In cooperation with the Gemeente Enschede, several RFID sensors are currently being installed in newly constructed surfacing layers in the city. The installed sensors will be monitored by ASPARi researchers over the next two years to assess its long-term monitoring capabilities, especially during the winter months.

In cooperation with the Gemeente Enschede, several RFID sensors are currently being installed in newly constructed asphalt layers in the city

Promising benefits for monitoring temperature but …..
The results of this project show that the passive RFID sensor is a feasible technology to monitor temperature progression during construction albeit for asphalt having an upper temperature threshold of approximately 125°C. It also appears feasible for monitoring asphalt temperature during winter periods when freeze-thaw cycles may damage and reduce the performance of the asphalt layer. 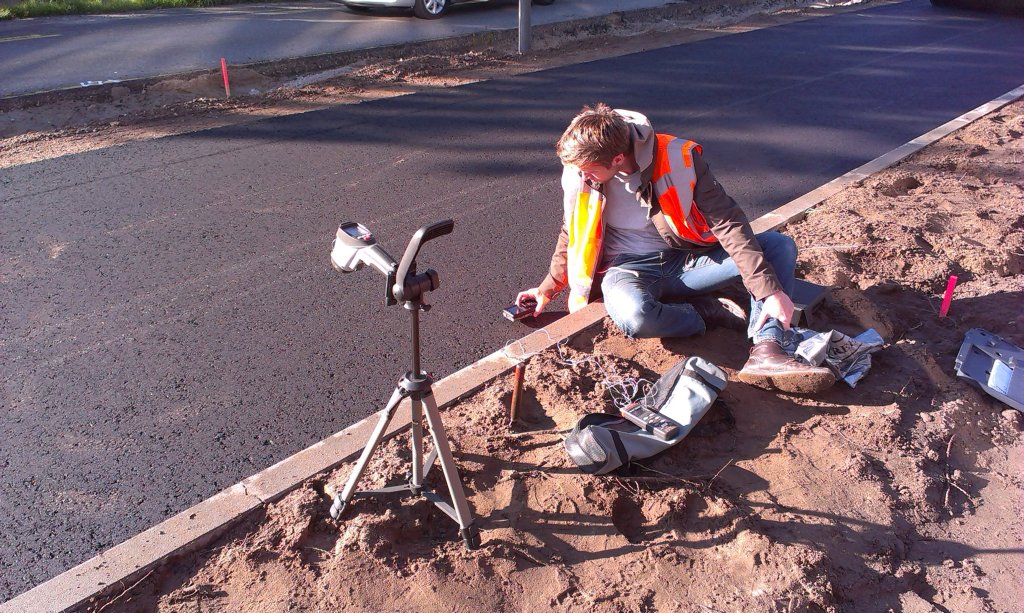 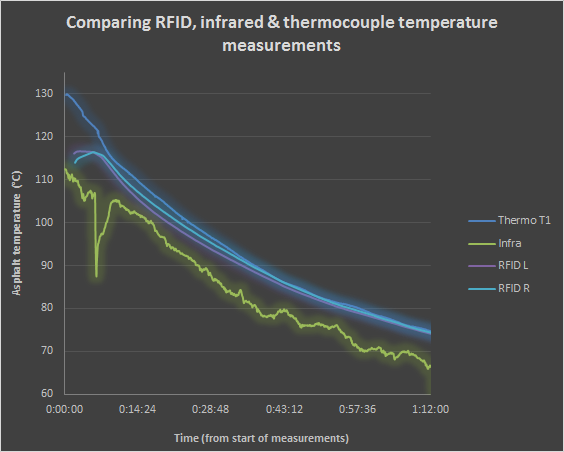 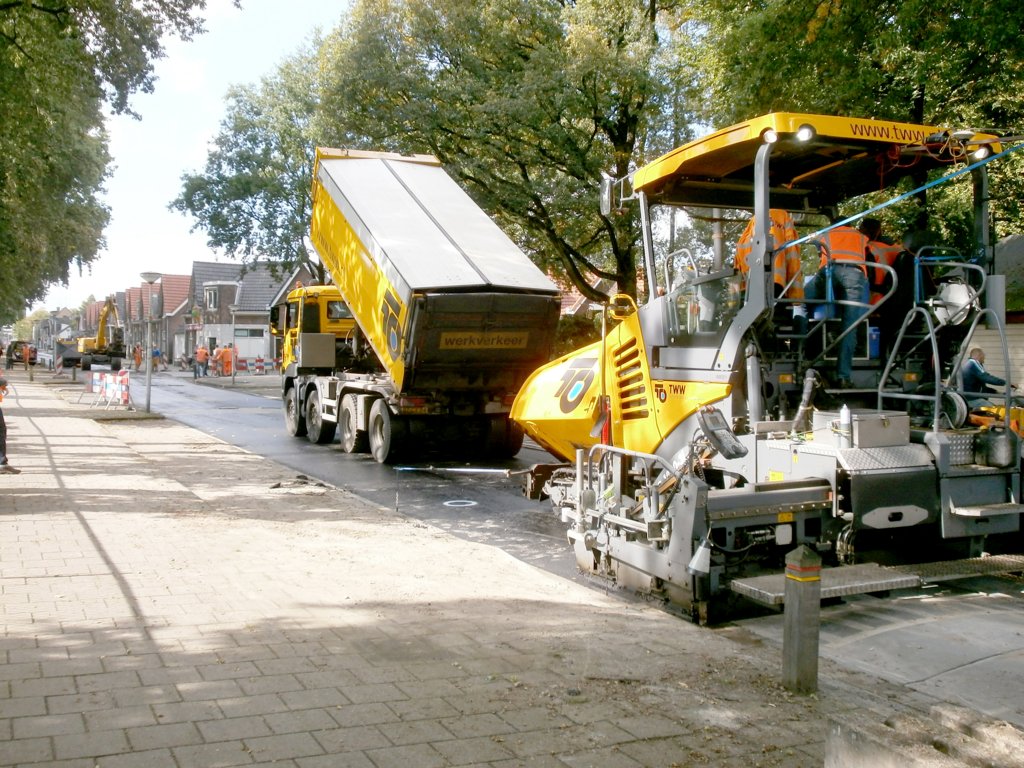 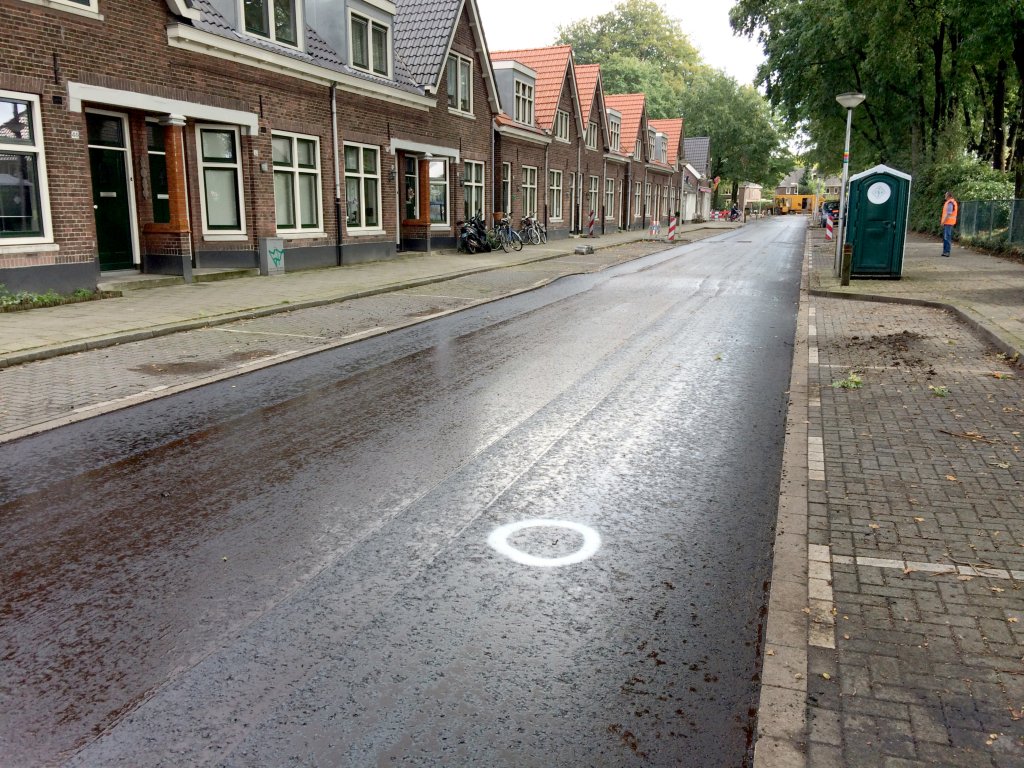 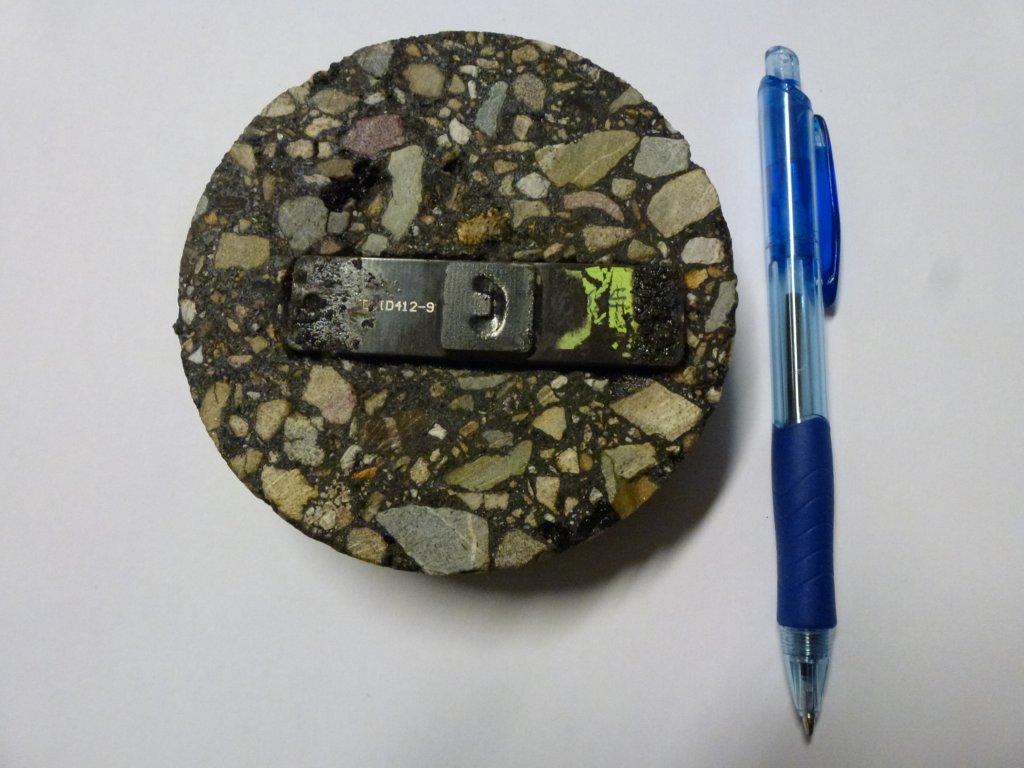 However, while the technology is promising, the study has highlighted limitations. Firstly, the absence of a suitable pressure sensor to capture the density progression during compaction activities is disappointing. Secondly, the limited temperature range probably excludes it being applied to the majority of HMA mixtures here in the Netherlands, although in the TU Delft application they were used under HMA. Thirdly, taking sensor readings is labour-intensive and cumbersome given the need to place the reader very close to the sensor (within 20cm) to take accurate readings. This presents significant safety problems in a heavy machinery environment and in heavy traffic during the life of the asphalt layer. Also, considering the size and the precautions needed to place the sensors, adding them in bulk for track & trace pavement management is not yet feasible.

Applying appropriate sensor technology in the asphalt construction process requires predictable and reproducible sensor performance given the nature of the asphalt construction process. Placing any sensor in the asphalt layer during construction is both challenging and promising. It is challenging since it needs to be done in a non-invasive manner and in such a way that it does not disturb the very properties being measured. Promising, since if done properly, it opens up opportunities for measuring a range of properties during and after construction given the rapid development of sensor technology.  The work into studying suitable sensors, sensor modalities and wireless communication will continue given the results of this project. Further industrial partners are invited to contact us and discuss the possibilities.