Responsive coatings have a great potential on the nanoscale in relation to traditional technologies for daylight management.

The challenge of the future is to minimize the energy consumption of buildings while maintaining an optimal comfort level in the interior. Controlling the energy streams into and out of the building and daylight management play an important role. Polymer technologies and especially responsive liquid crystal networks can improve the daylight management capabilities of building envelopes by making it adaptive on the Nano scale. A similar technology as used in this project is widely applied in LCD screens today but the integration into building technology poses many challenges.

In order to explore the possibilities of transferring polymer technologies into the field of building technology, an interdisciplinary research team has been established, covering the scientific areas of facades design and building physics on one side and chemical engineering on the other.

In a first step the PolyArch project focuses on applying reflective coatings on glass as a means of sun shading. Experiments and simulation show that adaptive coatings can have a clear energetic advantage when compared to current fixed metallic coatings. The project outlines the need for further research on technology development, colouration light perception studies, energy savings potential and other high potential applications. 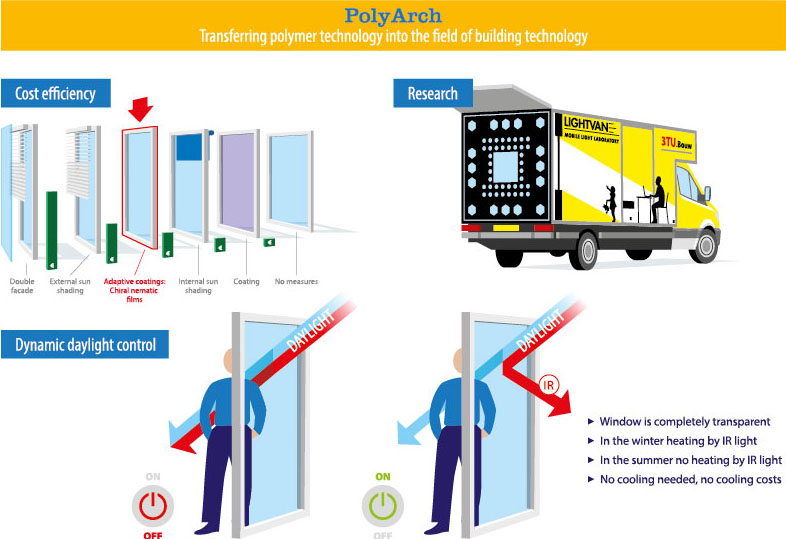 The building envelope as a potential field of application
Building envelopes need to deal with many, sometimes conflicting functions: Generally a maximum of natural lighting is desired to reduce the need for energy for artificial lighting which in today’s buildings accounts for approximately 30% of the total electricity demand. But daylight also contains a lot of energy that is sometimes unwanted and needs to be controlled For example, we need to block sun radiation in summer to prevent overheating, whereas in winter this incoming energy is desired to reduce the need for heating energy.

There are several traditional strategies to control daylight such as metallic coatings, exterior and interior sunshades. Existing daylight management strategies are rather inefficient or they involve considerable constructive effort, high investment costs and high maintenance and cleaning expenditures. On top of that the architectural impact of additional external or internal functional layers is big and they often do not comply with the designer’s vision.

In this first approach, the project focuses on daylight management, but responsive polymer coatings also show a great potential for other building related applications such as responsive surfaces to control heat absorption/emission, responsive insulation and colour change of architectural surfaces.

New polymer coating technologies
Our collaborating party, the Department of Functional Organic Materials and Devices at the TU/e is a leader in developing new responsive coatings. These materials are able to switch physical properties such as colour, reflectance and heat transfer. For instance, so called ‘responsive liquid crystal networks’ may adapt the degree of reflection. The position of the reflection band in the electromagnetic spectrum can be dynamically shifted in response to temperature or light. Reflection can be shifted in the near infrared part of the spectrum, thus controlling heat flux without affecting transparency in the visible part of the spectrum. When applied on a glass window this film determines whether the heating part of sun light is being transmitted or reflected, thus offering a new and unique method to manage daylight in the built environment.

Potential energetic performance and lighting quality
Due to the high intensity of sunlight in the wavelength range just outside the visible region, it is worthwhile to explore whether reflectivity of the switchable NIR coating in this range can be improved. A simulation study was carried out with idealized dynamic reflection properties in the range between 700 and 800 nm, to evaluate what the effect of such an improvement would be. The simulation results showed that for a south facing office zone in the climate of Madrid, an additional 15% of cooling energy reduction is possible compared to the existing window prototype.

The analysis of the samples’ transmittances in the visible wavelength region has revealed that there is no negative impact on the interior illumination by daylight. At the same time, their spectral transmittance does not impact the quality of the light entering a building. Still it needs more research into perception studies because the film is light angle dependent which means that the colour disturbance could occur at different angles of sight.

It shows that the technology would reduce the cooling needs for south facing offices by about 15% as compared to existing static coatings. 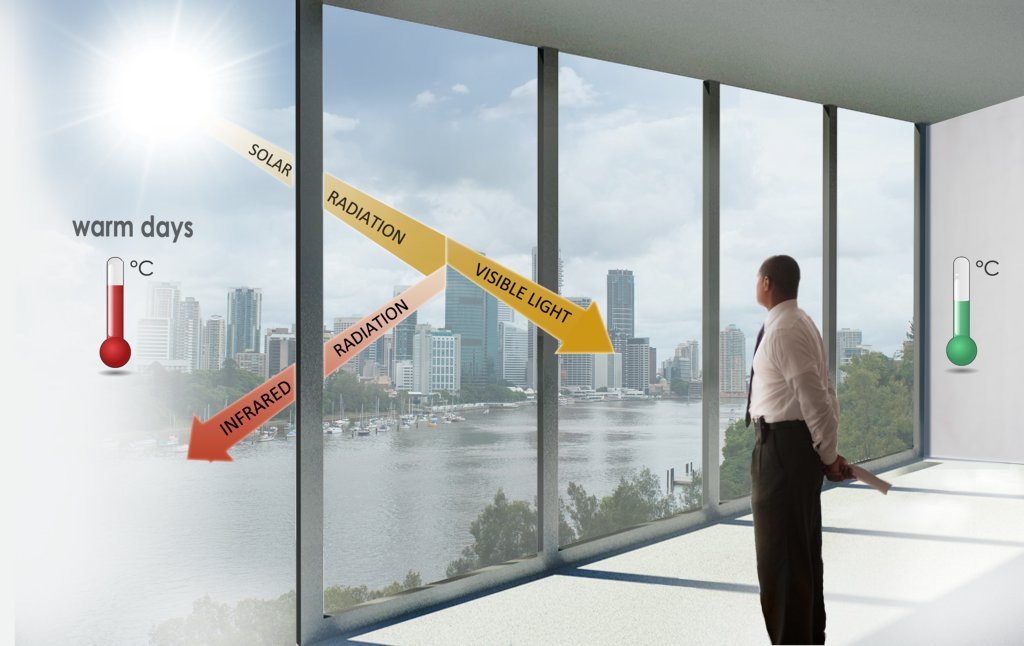 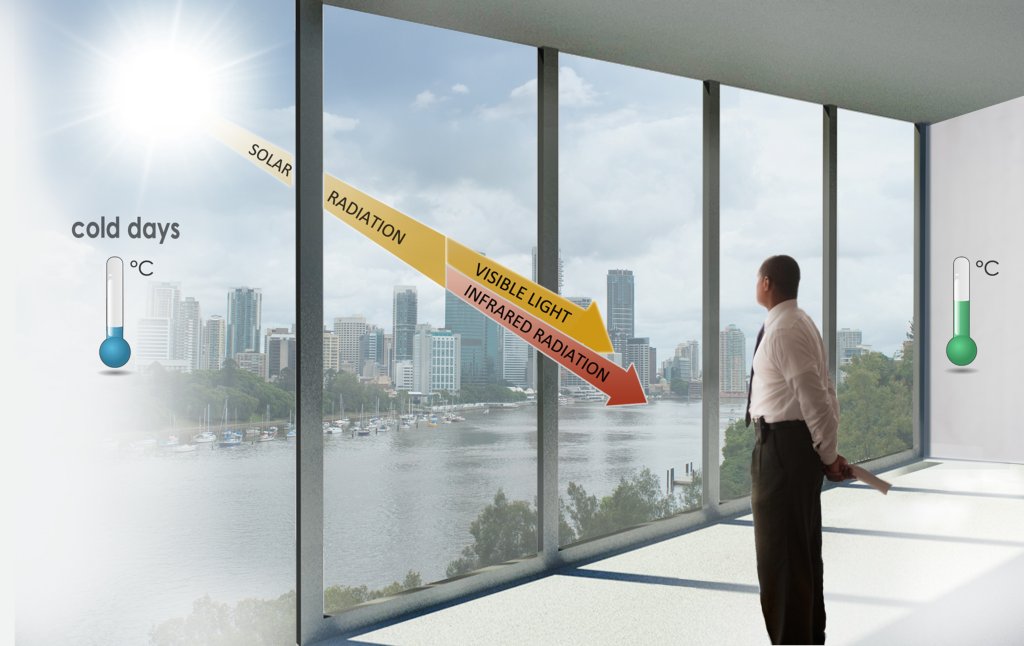 Up to now, the focus of the PolyArch project lies in applying reflective coatings on glass as a means of sun shading. A core feature of this technology is that the effect can be turned on and off. One can imagine a mirror that would switch to a transparent state. The switching determines if the sun radiation is transmitted into the room or reflected (in summer).

First samples have been created, measured and simulated for a coating in the infrared light spectrum, just outside the visible light. The human eye would thus not see the switching effect. It shows that the technology would reduce the cooling needs for south facing offices by about 15% as compared to existing static coatings. Theoretically the reflection could even be extended into the visible light range, displaying a sun-glass effect to prevent discomfort by glare and delivering a higher energetic effect.

Since the coating is responsive, this technology will potentially deliver a much better performance than current static metallic coatings.

Polymer coatings can be applied by embedding them into prefabricated insulated glass units. That means it can relatively easy be adopted into established design and building processes without the need for additional constructive effort for external sun shading devices. We can expect a high acceptance by decision-making parties.

But other applications need to be researched as well, such as opaque building envelopes that change colour according to architectural desires or absorbing and reflecting surfaces. 3TU.Bouw funding enabled a proof of concept for applying polymer technologies to the field of building construction and justifies the need for research into coloration light perception studies, energy savings potential, application possibilities and of course the development of switchable polymer coatings.