Solar energy can cover the demand of residential buildings with energy produced directly at the point of its end use.

The 3TU Lighthouse Leafroof project focuses on creating a roof design, inspired by the natural shape of leaves. Each of the leaf-shaped shingles incorporates the Luminescent Solar Concentrator (LSC) technology, which enables the system to “trap” solar irradiation, concentrate it to a much smaller area of PV cells and thus harvesting energy. This approach allows more freedom of building orientation and roof inclination compared to conventional PV systems. This project has successfully demonstrated a “leaf roof” prototype including feasible solar energy collection technology that also allows aesthetic design considerations.

The work has been carried out by the project partners from the Building Lighting group at the Eindhoven University of Technology (TU/e) and the Industrial Design Engineering group at University Twente (UT). TU/e was responsible for the development of the prototype while UT carried out simulations towards optimization of the design. The collaboration has been set up to establish an active interaction between the participating groups. Both, simulations and lab measurements impacted the design of a first prototype. The project concluded with a successful proof of concept. The prototype was turned into a demonstrator that was exhibited at the Dutch Design Week 2015 in Eindhoven. 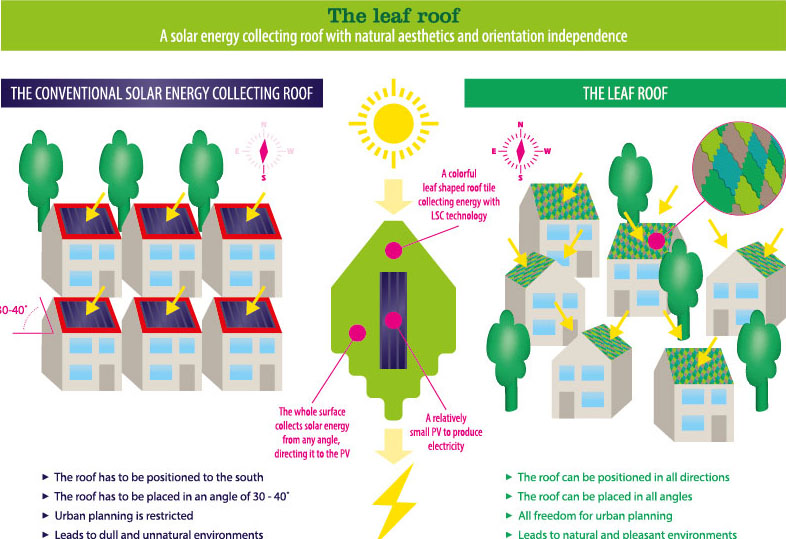 Luminescent solar concentration
Luminescent Solar Concentration (LSC) is a concept for harvesting solar energy that is comprised of a transparent shape acting as a lightguide with a large top surface. This lightguide consists of a material with a refractive index higher than air and containing luminescent material, usually called ‘dye’. Photons originating from solar irradiance, that enter the LSC get absorbed, subsequently re-emitted at longer wavelengths and next scattered by the dye. A large fraction of the re-emitted radiation gets trapped in the lightguide as it undergoes total internal reflection at the material’s surface. Because the re-emitted radiation has longer wavelengths there is hardly any secondary interaction such as re-absorption with the dye. The trapping is interrupted at the interface between the lightguide and an attached solar cell, where the photons get converted into electricity (see figure 1) [1]. 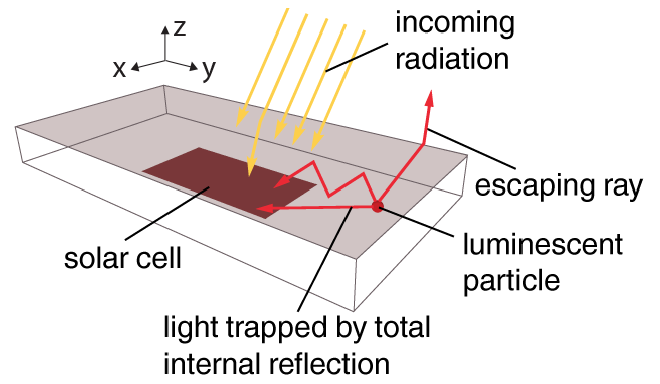 In order to identify the most suitable features of an LSC for the leaf tile, several numerical simulations has been carried out by UTwente. Three-dimensional models of waveguides with optical properties of the materials involved have been simulated using ray-tracing software PVtrace and LightTools. It allows the performance evaluation of an optical system without the physical realization of the system itself. Also the absorption and emission curves of dyes can be input of both software packages. The evaluation of the influence on LSC harvesting performance looked into parameters such as:

• Shape of the tile,
• Tile size,
• Tile thickness,
• Dye content, and the dye’s absorption and emission characteristics,
• Position and size of the PV cells.

Two key simulation results will be addressed in more detail: the overall shape of the tile and the configuration of the PV cells. Table 1 provides an overview of the simulation results, which clearly point out an advantage of a rhombic shape over the other selected shapes with respect to photon density at the PV elements.

Subsequent investigation revealed that within the leaf-like shape, optimum arrangements for the PV cells are those that do not concentrate all PV cells in the center of the tile.

Based on the discussion of the results and additional considerations with regards to potential ease of production, the configuration “Skewed parallel” has been chosen for the final design of the prototype.

Design of the prototype

The first pre-concepts of the roof tiles were simple rectangles and evolved via a rhombus to a leaf shape. The first leaf-shaped tile was developed resembling the leaf of a European birch, a common tree in the Netherlands. In order to avoid a flat and dull impression of the roof, it has been thought that the tiles should have different colors. The composing pattern was designed with different colors, among them three different green variations.

Overlapping of tiles must be reduced to enhance the energy performance (maximize the exposed surface hence light harvesting) and reduce costs (minimizing the overlap, hence material demand). The travelling distance of photons in the lightguide must not be longer than ten centimeters in order to minimize extinction (according to the exponential Beer-Lambert law for absorption of photons in matter) and re-absorption losses due to the dye. In order to maximize the utilization of light reflected from edges via reflective foils, the orientation of the solar cell relative to the LSC system is of importance. Different colors have been chosen to realize the LSC leaf tile. The spectral absorbance and emittance for each color was measured and are shown in figure 2. One can see that according to the theory, the emission spectra are shifted to the infrared part of the irradiance spectrum, compared to the absorption spectra. 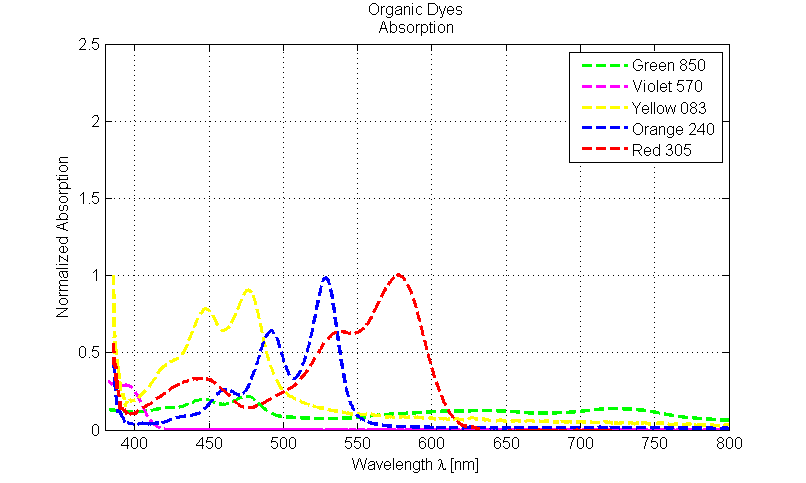 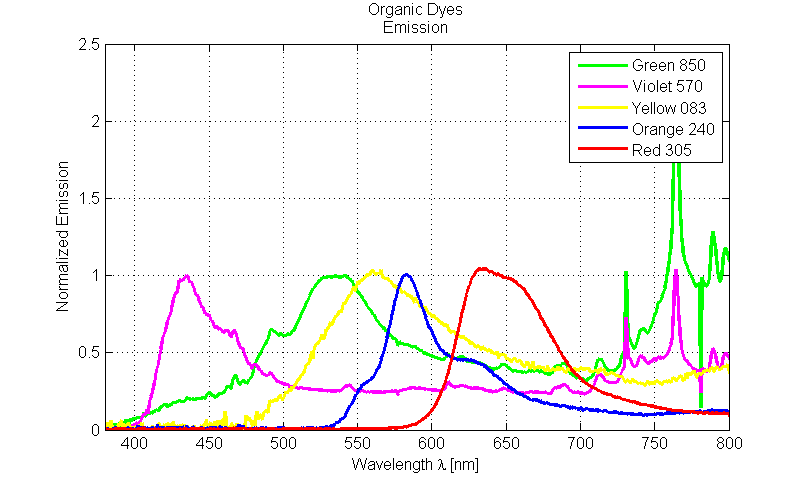 For the prototype design, a tile configuration consisting of 6 PV cells has been chosen. The total area covered by PV cells is then 312 cm2. Different configurations have been evaluated with regards to their efficiency by numerical simulations conducted by UTwente. The solar cells used are Sunpower C60 solar cells GEN C BIN J with 22,5% efficiency under Standard Text Conditions (STC).

During lab tests of prototypes it has been observed that dark elements such as PV cells concentrate lots of radiation and subsequently heat up their local surrounding leading to a temperature gradient with the plastic waveguide. This, in turn, creates small bends in the prototype. The resulting mechanical stress might lead to the breakage of the interface between cell and waveguide. To overcome this drawback a configuration was chosen that allows a greater distance between cells, as shown below in fig. 3. 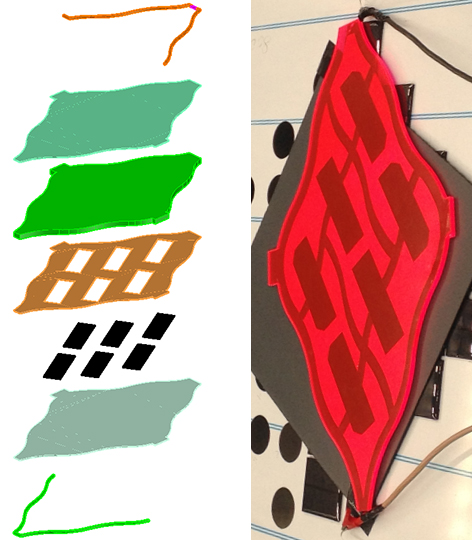 The leafroof prototype has been demonstrated at the Dutch Design Week. figure 4 shows a photograph of the exhibit at the event. 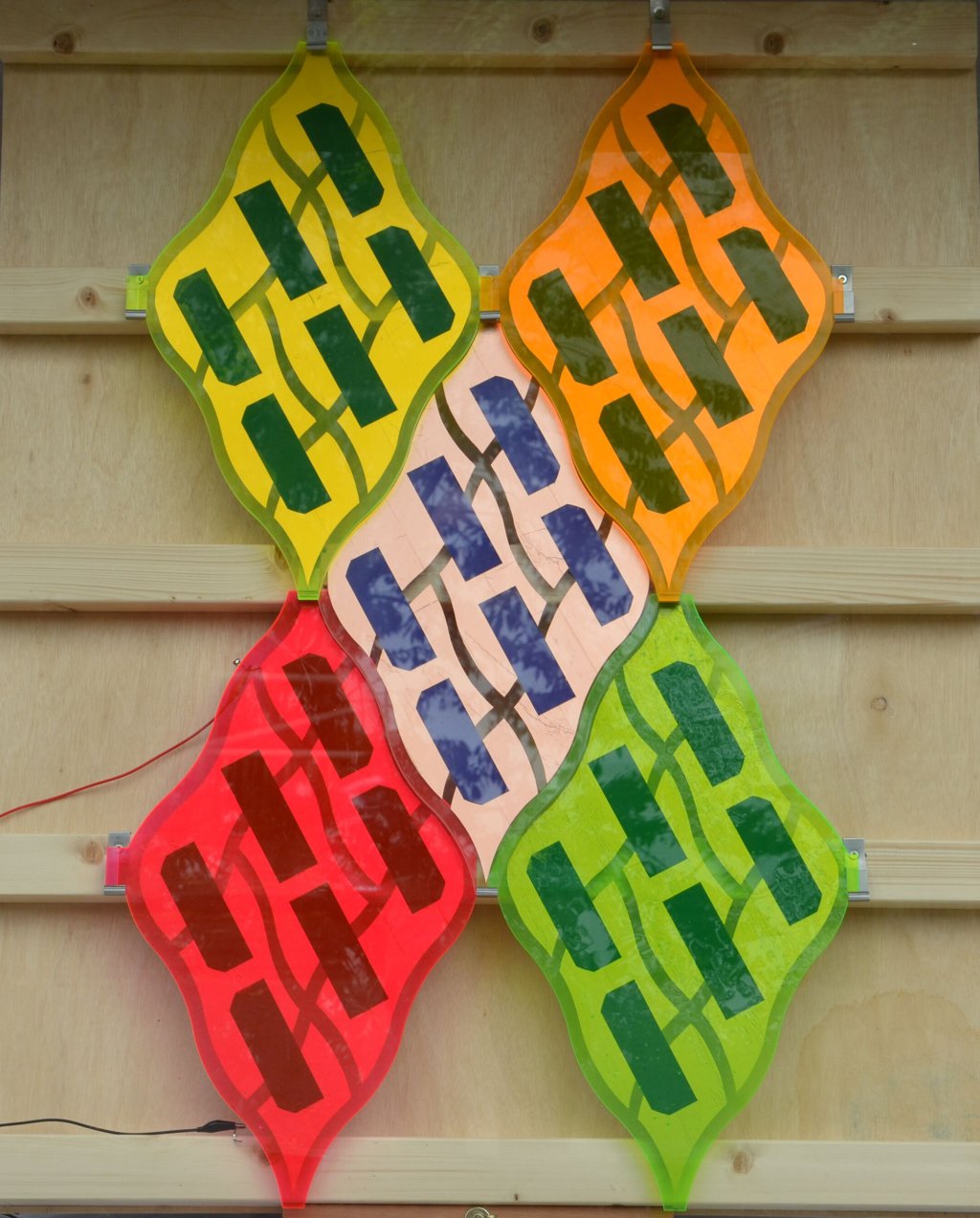