The project is an inter-disciplinary initiative for the ‘designed engineering’ of heterogeneous fibres with variable material behaviors to create real-time responsive interior environments (furniture systems). These smart furniture systems will embody properties of real-time adaptive temperature control, real-time structural adaptability and real-time physiological support of the human body. These properties shall be fully self-regulated (devoid of external power sources) via engineering multi-layered fibre compositions, which can sense the forces exerted by the human body and accordingly alter their physical properties. The scale of operation is chosen deliberately, considering the time-span of one year within which we will produce a fully operational 1:1 physical prototype and scientific material-research guidelines. A research through design approach with 3 iterations shall be adopted in this research: working on the yarn (U Twente + EURECAT), textile (TUE) and product (TUD). Each iteration will consist of the development of a prototype, the creation of future usage scenarios + business possibilities, and a workshop to envision future requirements. In this project, prototypes and material output will be co-designed with material scientists, architects, textile and industrial designers and will be used to assess 1) design challenges, 2) business opportunities, and 3) technical feasibility of scalable multi-performative interior systems for applications such as healthcare and future office environments. 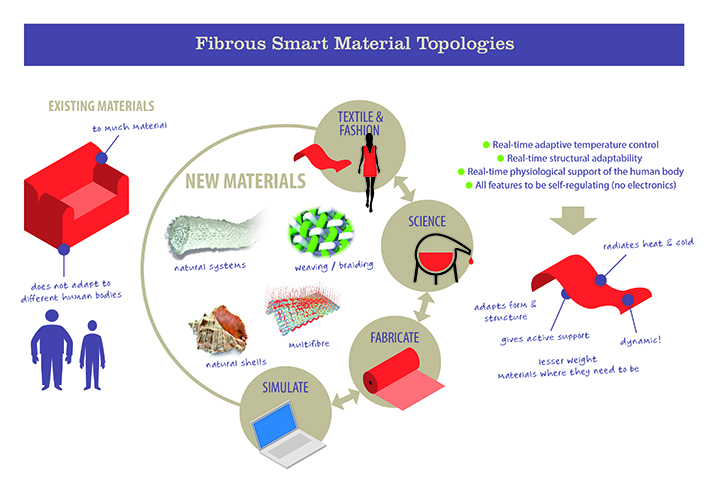 For the purpose of the research, a decision was made to choose the La Chaise Lounge designed by Charles & Ray Eames as an inspirational form. This voluminous lounge piece has a captivating elegance and allows a wide range of sitting and reclining positions. La Chaise has long since established itself as an icon of organic design. The selected chaise lounge geometry is tested as a boundary region while considering the active load of one person sitting on it. The topology of the fragment is later optimised based on supports and loads. In this process, the material from the parts that are less needed is removed till the initial supporting matter is defined. Following this step, according to the principal stress lines in different axises which indicate compression, tension and shear forces are extracted to be traced for creating the desired topology. The coordination of the point indices and the magnitude of moment and force vectors are calculated to identify the exact spots to manipulate the material distribution based on the defined cross section, material properties and directionality. 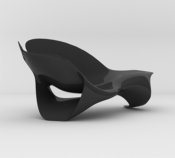 For understanding the composite structural behavior it was necessary to find an understanding of the relations between fibre arrangements and strength characterisation. The density and directionality of the fibres mainly specify the interaction between the fibres and determines different structural strengths. For this end, we conducted a robotic winding based cylinder experiment. The cylinder model was analysed as one union composite shell to observe the non-linear static stress flow over the model through finite element methods. 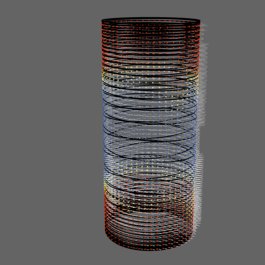 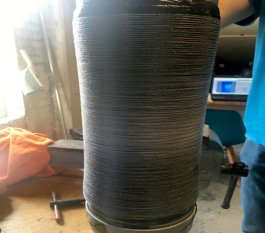 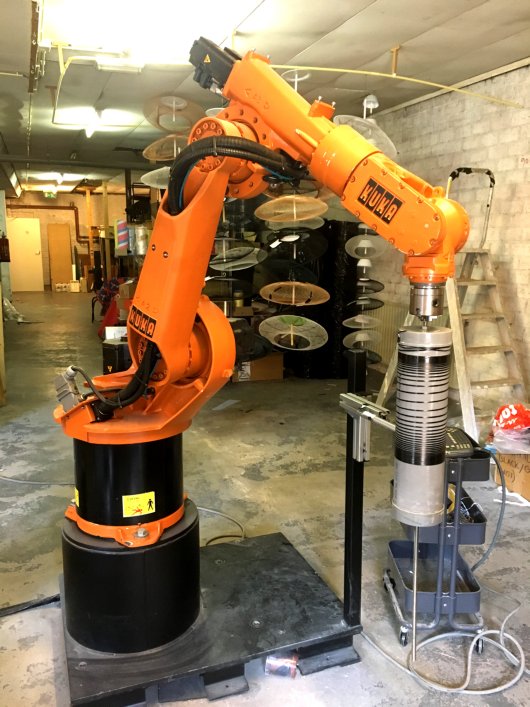 The resulting model indicated the stiffness distribution over the mesh varying between a range of 0.3 as minimum stiffness required to 1.0 as maximum stiffness required from one end to another. The stiffness factors are then interpreted into winding angle and the helix pitch which creates the new mesh topology corresponding to the directionality and density of fibres. The significance of the study is to predict how the fibers with certain configurations can interact and how composite strength values are affected by number of piles and directions. In this study, the winding angle value is the key parameter to gain a full control upon the local thickness and material deposition which feeds directly from stiffness factors.

The structural strength statistics from the cylinder experiment are analysed and recorded. The experiment is followed by a prototype of a fragment from the concave area from the geometry. For winding technique it is important to consider measures to prevent fibres being offset in these areas. As a result, a waffle section containing grippers are designed to guide the fibres through the gripper teeth which allows the fibres to be positioned while they are under tension. The project is on-going and based on the robotic fabrication and material properties based feedback is now progressing into the next phase of 1:1 physical prototyping.