Convective Concrete is about a research-driven design process of an innovative thermal mass concept. The goal is to improve building energy efficiency and comfort levels by addressing some of the shortcomings of conventional building slabs with high thermal storage capacity. Such heavyweight constructions tend to have a slow response time and do not make use of the available thermal mass effectively. Convective Concrete explores new ways of using thermal mass in buildings more intelligently. To accomplish this on-demand charging of thermal mass, a network of ducts and fans is embedded in the concrete wall element. This is done by developing customized formwork elements in combination with advanced concrete mixtures. To achieve an efficient airflow rate, the embedded lost formwork and the concrete itself function like a lung. 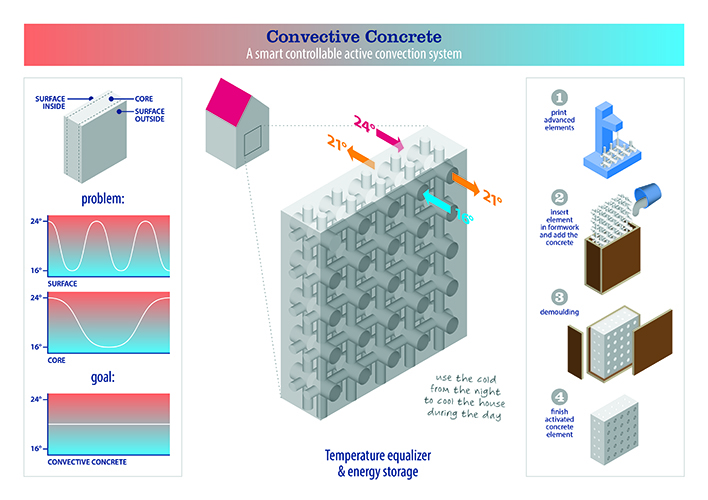 The use of thermal mass is usually considered as an effective strategy for achieving energy efficient building designs with high thermal comfort levels. This is normally done by applying construction types with high thermal storage capacity (e.g. concrete) on the inside of the thermal insulation layer. Such heavyweight constructions have a slow response time. This thermal inertia helps to flatten temperature peaks, but the slow response is not advantageous at all times. Due to a lack of control possibilities regarding when and how much energy to exchange between interior zones and the constructions with thermal mass, these dynamic effects may actually also increase heating and cooling energy demand during intermittent operation or can cause unwanted discomfort, either due to too cold surface temperatures when the building is already occupied on winter mornings, or because the accumulated heat can sometimes not be sufficiently released, leading to potential indoor overheating issues in summer. Another shortcoming of thick concrete slabs is that actually only a small part of the heavyweight material (usually the first few centimetres) effectively plays a role in storing thermal energy. This forms a missed opportunity.

To accomplish this on-demand charging of thermal mass, a network of ducts and fans is embedded in the concrete wall element.

Convective Concrete initially targets the residential building market. The goal is to mitigate residential overheating during summer periods by reducing the temperature of constructions through active heat exchange between the building construction (hollow-core concrete slabs) and cool outside air at night. Even though air has a relatively low volumetric heat storage capacity compared to e.g. water, it is used as a transport medium in this project, because of:

• Its widespread availability at favorable temperatures;
• Can be combined with earth tubes;
• Easy construction and installation process: plug-and-play;
• Provides standalone elements that do not need to be connected to additional systems;
• Can function passively without mechanically forced convection due to the buoyancy effect;
• No risk of leakages, punctures or frost damage;
• Low weight and therefore less structural requirements.

Additive manufacturing of lost formwork differs from the approach of direct concrete printing, but allows for traditional processing of the concrete itself.

To accomplish the on-demand charging of thermal mass, a network of ducts with attached fans, needs to be embedded in the concrete wall element. The fans act as back-up to the buoyancy effect to ensure a sufficient amount of air flowing through the wall. This is done by developing customized formwork elements in combination with advanced concrete mixtures.

Additive Manufacturing (AM) is researched, because it is a good method for this kind of rapid prototyping. Customized and free-form parts can be produced easily. AM of lost formwork differs from the approach of direct concrete printing, but allows for a traditional processing of the concrete itself. To benefit most from AM as production technology, the free-form and customized parts needed for the Convective Concrete are printed in wax, using Fused Deposition Modeling (FDM), an AM process based on material extrusion, that can be melted after the concrete is hardened. The building volume and resolution of FDM printers can be adapted to the desired size and layer thickness easily. However, for the first prototypes wax casting was used. 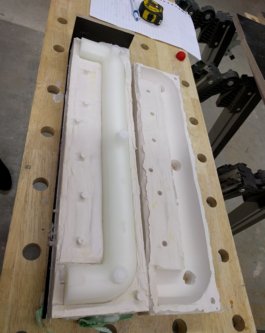 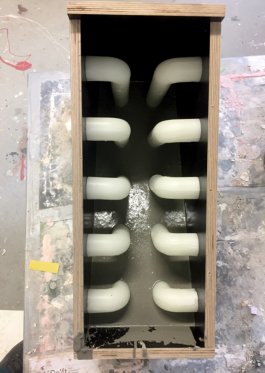 To achieve an efficient convective flow, the embedded lost formwork and the concrete itself should function like a lung. The convection takes place with separate pipes on both sides of the concrete’s core to increase the charge/discharge of the thermal storage process with help of fans, in the event of lack of buoyancy effect and with the help of valves, to control when the slabs are ventilated. There will not be any openings through the slabs themselves, because that would cause thermal bridges. The concrete mixture with matching characteristics (density, porosity and lambda value) will be fabricated on the basis of input from computational simulations. 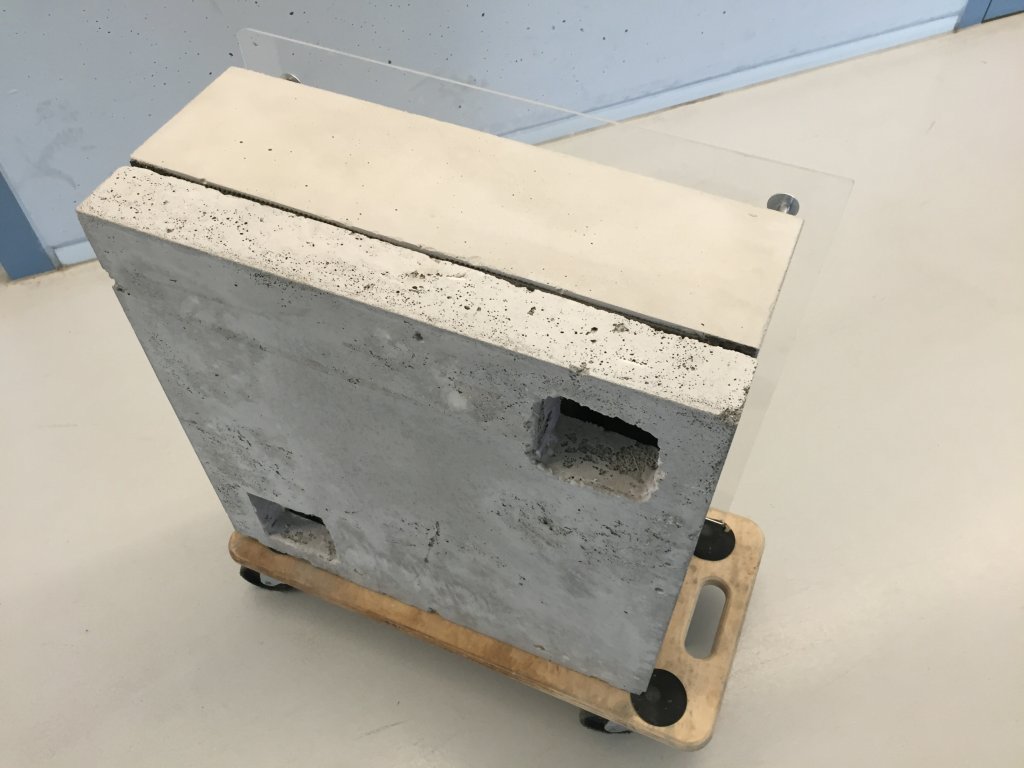 As soon as the outcomes of the simulations match the physical models, parametric models can be designed, after which optimized internal formwork for the Convective Concrete can be printed and the façade and internal walls can be applied in the built environment. The final product can be in the form of a prefabricated concrete slabs, but also in the form of the inserts itself that is are placed embedded in the on-site built formwork.