The project aims to design, produce and realise a small, but fully bio-based composite pedestrian bridge at the campus of TU/e. So far, few bio-based building projects have been realised world-wide, but they focussed either on non-structural elements or they partially used building materials based on fossil materials.

The application of bio-based materials in the built environment is an extremely promising approach towards a more circular economy and a sustainable environment, which is one of the National Science Agenda’s themes: “Energy and raw materials: Circular economy”.

Recent developments have shown that bio-based materials can provide a useful approach for recyclable objects. Until now, fully bio-based primary structural elements have not been used and the applications are limited to experiments with facades components. Building industry clients are generally hesitant to put new technologies into practise without a proof of concept and therefor this pedestrian bridge is a big step forward. 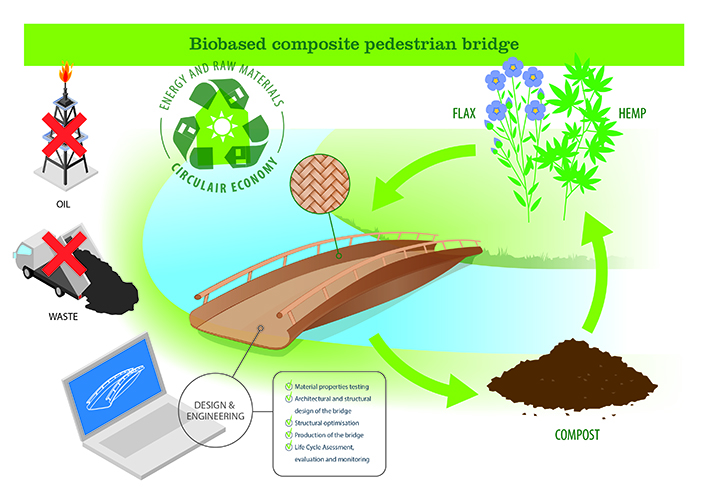 The main goals of the research project on bio-based materials were: investigating options for further reduction in the use of fossil fuels, preventing further depletion of raw materials and increasing options for a transition towards a more circular economy. For the unit Structural Design at the University in Eindhoven: TU/e , the main research question was whether and how these bio-based composite materials could be used in structural loadbearing (bridge and building) applications. Until recently bio-based composites have already been sparsely used in façade applications and also some structures with limited bio-based materials are known, but a bridge fully made out of bio-based composite materials had not yet been realised.

The main research question was whether and how these bio-based composite materials could be used in structural loadbearing (bridge and building) applications. 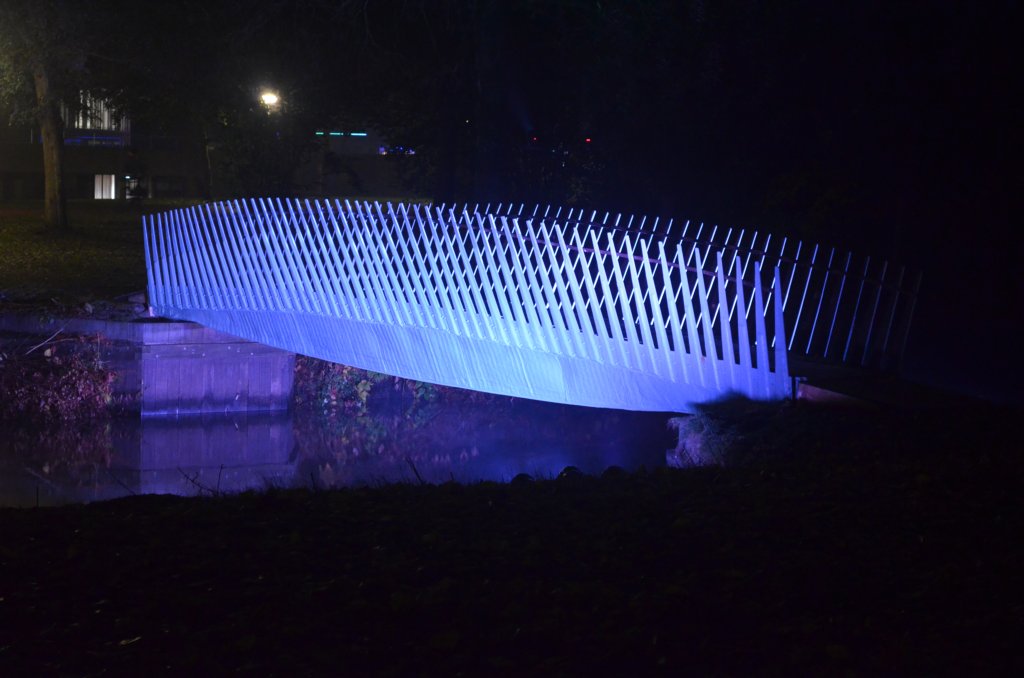 TU/e (acting as the project leader) submitted the research project proposal at the end of 2015 for the 4TU lighthouse call. The project was awarded in early 2015 and with the other project members: the university in Delft: TUD, as well as the Dutch Centre of Expertise Biobased Economy (universities of applied science Avans and HZ) ) and a company NPSP bv,  the projected started in early 2016.

The initial ambition was to realise a bridge with a span of about 8 m.  This ambition was raised towards realising a bridge of 14 m. This way is became possible to cross the width of the river Dommel at the TU/e campus in Eindhoven. With the help of the TU/e real estate agency a location was found at an already existing small steel footbridge. This way the already existing bridge abutments could be reused.

The bridge, first in its kind, has been made fully out of bio-based materials: Flax and hemp fibres in a bio-based resin and round an internal shape of PLA bio-foam. Obviously the bridge had to fulfil the normal structural requirement in terms of safety and usability, like any other bridge. Also a normal building permit by the municipality of Eindhoven was required. The research, the design as well as the production and installation has entirely become possible through the enthusiastic collaboration of many students involved in all parts of the project. The project team-members together with students started off in joint design sessions, with generating design ideas in sketches and models. In further sessions the most promising designs were further investigated and elaborated. In student projects the designs were optimised using Rhino/ Grasshopper programs, materials were tested on strength and stiffness in the TU/e’s structural laboratory in order to model the material behaviour as close as possible and to arrive at safe design values of strengths. Using these values as well as other sources the preliminary structural design calculations were made. In a later stage when more information became available simple beam- models were replaced by more complicated Final Element Models (FEM). From the final design the detailed production drawings were made.

The chosen production method was Vacuum-infusion. Simply put, this meant that layers of fibres (flax and hemp) were glued around a shape of bio-foam, this was then put in a large bag and brought under a vacuum. This causes a liquid  bio-(epoxy) resin to be sucked into the product. This resin has been mixed with a hardener and causing a chemical reaction. With the fibres this in fact becomes the solid bio-composite. 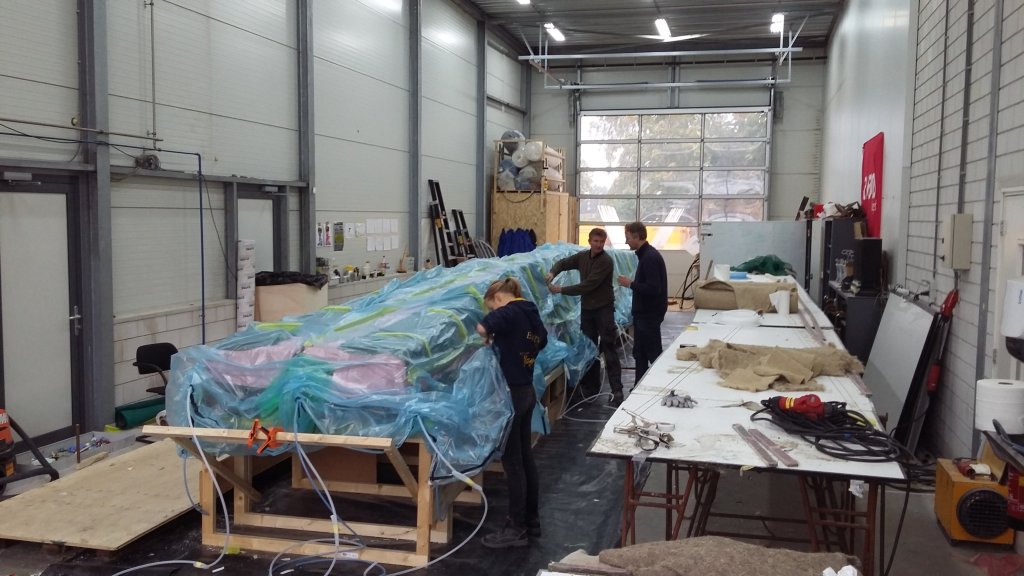 The initial ambition was to realise a bridge with a span of about 8 m.  This ambition was raised towards realising a bridge of 14 m.

The exo-thermal reaction of the hardener in the resin heaths up the internal foam core. Earlier tests and making a 2 m, 1:1 scale production test model showed that the temperatures could become too high causing the foam core to melt. For this reason it was decided to work with prefabricated lamellas of 10 mm in the top and bottom flanges of the bridge beam as well as using insulating layers of cork material. Thus a closed bridge section was created of 20 mm thickness at top and bottom flanges of the beam and only 10 thickness at its web sides.  It means that the resulting bridge beam is very light-weight in comparison to other, for example concrete, bridges. The whole bridge including its rather heavy railing weighs 2,6 tons.

To monitor the bridge beam’s structural behaviour during its Service Life, glass-fibre sensor technology, called Fibre Brag Grating (FBG), in  to the top and bottom flange of the bridge is integrated. Elongation of the glass fibre sensor, caused by a change in temperature or by an external load, causes a shift in the reflected light spectrum that is sent through the glass fibre at the sensor positions. This shift in spectrum is a precise measure for the local elongation and has an accuracy of 1 micrometre per meter.  With students using these techniques the elongations of the 28 sensors is being monitored. Additional load tests static as well as dynamic (Eigen-frequencies, damping behaviour) are carried out.

The earlier mentioned 2 m test model, as well as the final bridge, have been produced at the Avans Composite Laboratory at Spark Rosmalen, Netherlands. The bridge has been produced by students of 4 different educational levels, from University towards vocational training (TU/e, TUD, Hogeschool Avans, het Koning Willem 1 college and Bossche Vakschool).

Finally the structural strength and safety was tested and proofed successfully in attendance of the Building inspectors of the Municipality of Eindhoven. The load test adding 500 kg/m2 in large water containers was without problems and it also showed the accuracy of the theoretical models in the prediction of the deflections. 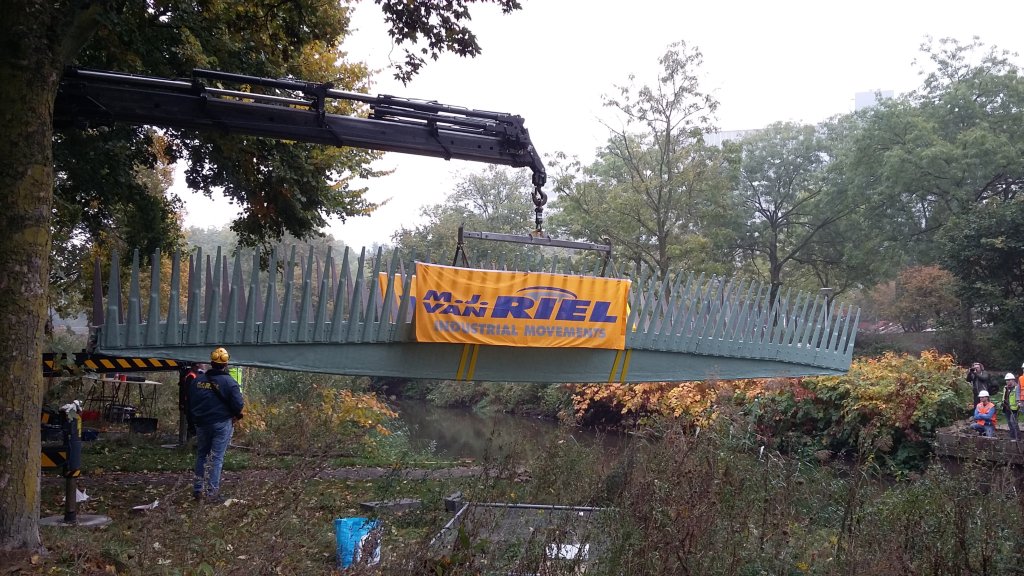 With the help of many students and many others involved, the bridge was installed, on time, during the so-called Dutch Design Week event (DDW) in October 2016 . Alderman Mary-Anne Schreurs opened the bridge for public use and also declared that the city of Eindhoven would like to have a second bridge in the development of their City area “Mariënhage”. This project is now well under way, resulting in further research and developments. Research on moisture and creep influences as well the monitoring of the bridge itself are currently being performed. 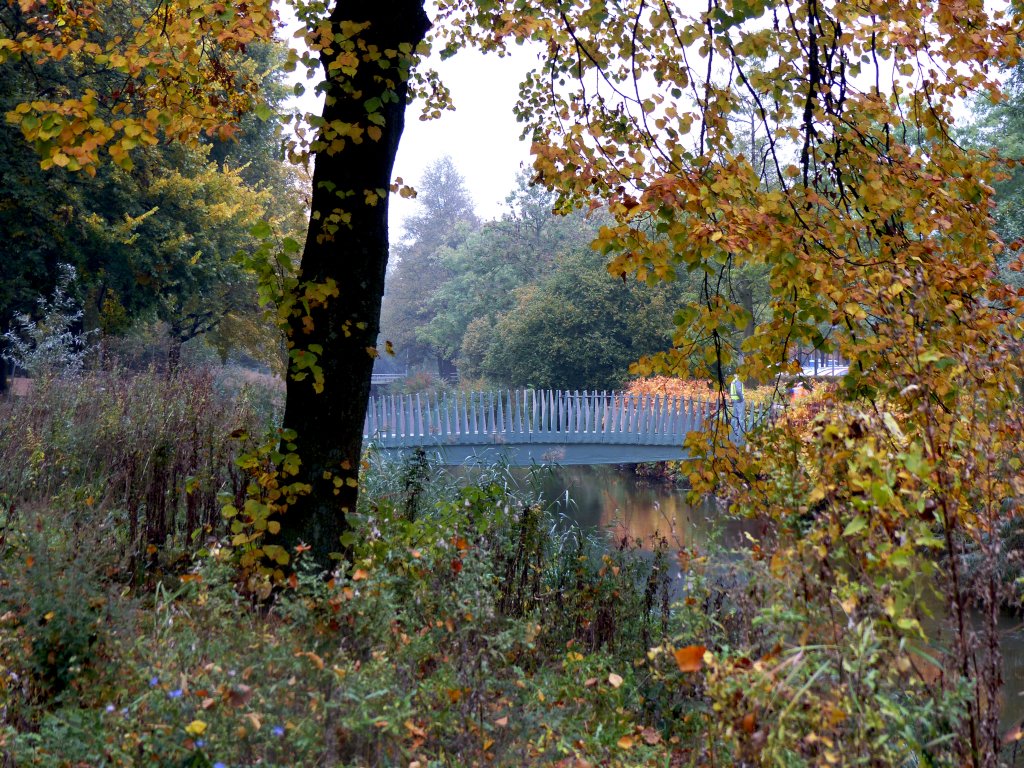