A real-time modelling system is a dynamic system which obtains raw data from measurement tools, processes them through mathematical analysis and finally delivers achieved information to the user in standard formats.

Renovation of existing buildings is known as an essential stage in reduction of the energy losses. A critical part of this process is simulation of energy usage based on geometric reconstruction of the building. Following many research projects focused on parameterizing the energy usage, various energy modeling methods were developed during the last decade. However qualified simulations highly depend on external geometric information of the building.

On the other hand, by development of the accurate 3D measurement tools such as laser scanners, the industry is highly eager to use this technology for innovative solution. Architectures, engineers and constructors were the early users of laser scanner products. But the application of this technology still does not meet the increasing industrial demands. The automation of 3D information extraction from laser point cloud and object detection tasks are still significant challenges of industry.

The aim of this project is designing a platform through which required geometric information can be efficiently generated to support energy simulation software. Developing a reliable procedure which extracts required information from measured data and delivers them to a standard energy modeling system is the main purpose of the project. Reaching to this point is highly beneficial both in short and long term. Energy labels for existing buildings are an urgent demand of authorities. Having a functional application to speed up energy simulation and energy label generation would be an early achievement of this project. In addition, methodological development of such a system would have a significant contribution in the as-built modeling research field 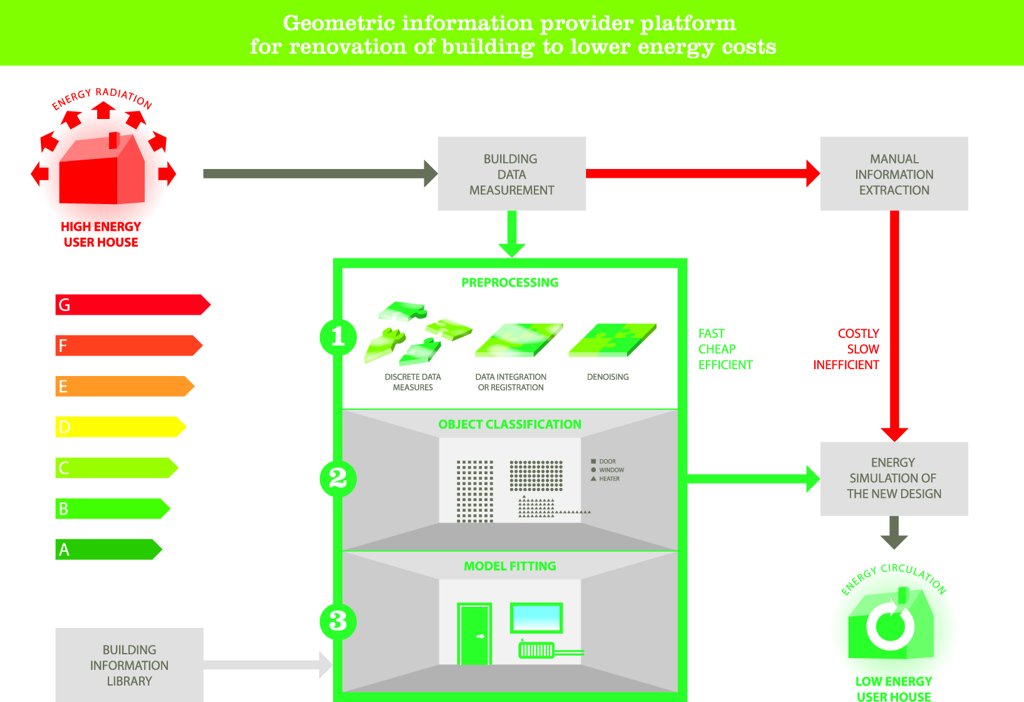 Expected outcomes
Current renovation procedure for energy efficiency is too slow and expensive and is not covering market demand. One of the bottlenecks is having a reliable 3D as-built model to run the energy simulation. However 3D modeling is a wide field in science with various methods and standards. Energy simulation software, such as Energy plus, requires general geometric information from indoor area of buildings. The coordination of heating zones, dimension and orientation of walls, position and shape of the openings, position and volume of energy sources are quite essential information for a reliable energy simulation. Therefore the expected outcome is an efficient platform which provides such information. 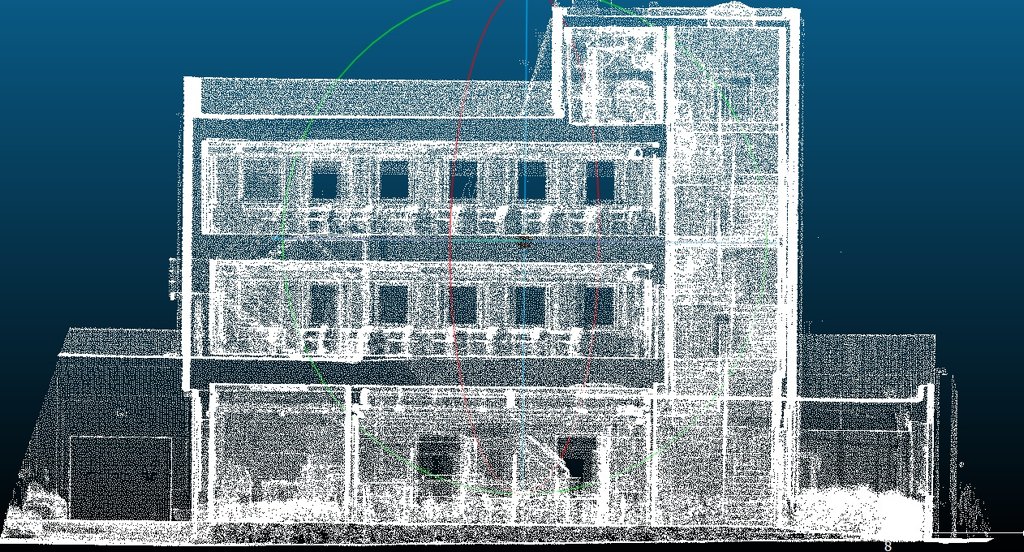 Optimization between automation and accuracy for efficient energy simulation is the main target of this platform. Nowadays laser scanners are frequently used to provide dense as-built measurements. However the cost of modeling is often more than the measurement. Following algorithm describes an easy-to-use procedure which leads to creation of input file enriched by the geometric information for Energy Plus software. This procedure is designed to tackle the complexity of dealing with laser data, reducing uncertainty in calculations and avoiding unnecessary details.

The platform and the functional sections
The user can operate the platform through an interface (Figure 1). Push buttons, selection from the list and simple mouse clicks are all user efforts to interact with the program. Users can track the procedure through some illustrations and apply required changes. Functional sections are illustrated in Figure 2 and are explained in following subsections.

The Point cloud of a building can be uploaded as a text file to the system. At the beginning the point cloud does not have any structure. In this part histogram matching analysis is used to divide the point cloud to a number of levels.  For this aim Z value of all points are used to generate a histogram. Some knowledge based conditions is employed to automate the process. For instance in the histogram, a minimum between two maximums (the ceiling points from previous story and the floor points from the next story) is considered as a clue to draw a division line. Or a condition of at least 3m distance between division lines is also considered to avoid wrong detections. Then the points of different stories are labeled.

This procedure is designed to tackle the complexity of dealing with laser data, reducing uncertainty in calculations and avoiding unnecessary details.

Segmentation of level points
A typical story is composed of a floor, a ceiling and some walls. In the most cases the floor and the ceiling are horizontal objects and the walls and their attached objects (doors and windows) are vertical. In this section, an algorithm is used to differentiate the floor and ceiling points from the rest of the points. The user can select a story to recall corresponding points. Ceiling points and floor points of the selected story are detected and labeled through a plane fitting function.

Wall extraction
The aim of this section is recognition of wall models. This is an essential step because the orientation of walls and their dimensions are very important information for energy simulation. Instead of the common methods which is based on plane detection in 3D space, 3D points are projected on XY plane as a main source of wall detection. This strategy brought some computational advantages. After some successive computations (mentioned in the flowchart of figure 2), main walls and their attributes are estimated.

Openings extraction
Detection of empty spaces on the wall is the main clue of automatic window detection. The idea is that laser points are more dense and uniform on wall area. While glass windows are appeared as holes in point cloud. As another clue, windows with curtain or closed doors are appeared as a slight intrusion or extrusion in the dominant wall plane.

Verification and labeling
Extracted information needs to be controlled and verified by the user. For this reason a user-friendly section is designed. The results of automatic object detection are represented to the user through the interface. The user is enabled to apply some corrections with simple efforts such as mouse clicks and selection from a list. This information finally is combined with automatic driven information.

Save in Energy plus format
Verified information has to be transformed to a format which is readable for Energy plus. A sample txt file is used for this aim. Geometric information is added to the end of this file and saved in a separate name.