`We're only going to succeed with the knowledge of tomorrow'

The world is in transition. This is having a huge impact on all sectors, and that includes construction. Consequently, 4TU.Bouw is committed to jointly developing the knowledge of tomorrow.

We drive on heavily traveled roads and transport goods over bridges and viaducts that are nearing the end of their technical service life. However, during much-needed maintenance work, traffic must be able to continue running as usual. Also, a large number of new homes are needed to solve the housing shortage, but at the same time, existing homes also urgently need to be made more sustainable. Massive use of solar panels is not a solution; the energy grid would then collapse. Everyone should use heat pumps then? No, because that would cause the fuses to blow.

Accelerating, improving and making construction more sustainable entails a complicated process in which all possible solutions each have their own pros and cons. What’s more, all the separate elements also form part of a larger whole that has to fit together. Will we ever find our way out of this maze? According to Max Hendriks and Theo Salet of 4TU.Bouw, the answer to that question is ‘yes’. They are providing support to the entire construction industry when it comes to disentangling and reconciling the various complex issues: “It’s only with an integral and multidisciplinary approach that these social issues can be solved.”

TU.Bouw is a partnership between the architecture faculties of four Dutch technical universities: Delft, Wageningen, Twente and Eindhoven. It’s part of the 4TU.Federation, which aims to strengthen the position of the Dutch knowledge economy. This federation has set up and financed several initiatives from the four TUs to address social problems and other complex issues.

Originally started as a Center of Excellence with a focus on research, 4TU.Bouw is now becoming much more of a network organization. This happens both in-house, by bringing researchers together, and externally. “So, we also seek contact with partners outside the universities,” says Max Hendriks, scientific director of 4TU.Bouw. He adds: “A good example of such a partnership is our collaboration within the BTIC, the the Bouw en Techniek Innovatiecentrum (Construction and Engineering Innovation Center).

The BTIC promotes, connects and provides support to Dutch companies, knowledge institutions and clients in the development and adoption of innovations for a rapid transition to a future-proof built environment. Initiators of the BTIC are, in addition to 4TU.Bouw, the Association of Universities of Applied Sciences, the Dutch Ministries of Economic Affairs, Agriculture and Innovation, the Netherlands Organisation for Applied Scientific Research (TNO), Bouwend NL, NL Ingenieurs and TechniekNL. In short, cooperation exists between parties throughout the construction, design and engineering chain.

Theo Salet, chair of the deans’ consultation group within 4TU.Bouw, says that the transition from being a research institution to a network organization is imperative. “The whole world is in transition and that is having a huge impact on construction. Whether you’re talking about urbanization, new construction or infrastructure. In fact, all socially relevant topics touch on construction.” He points out that these often revolve around highly complex issues: “These issues are all interrelated. In that case, it only makes sense to then set yourself up as a network organization. You will not be able to solve it otherwise. You have to do it together.” Hendriks goes on to say: “Networking internally and externally is one of our key goals. In this respect, the main core activity of the four TUs is to develop knowledge and to educate students with that new knowledge.” 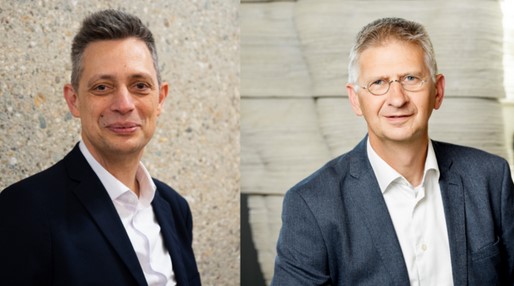 On the challenges facing infrastructure, Hendriks says: “On the one hand, we know that the physical infrastructure in the Netherlands is ageing. The question is whether we will be able to maintain it or if we need to reinforce or replace it. While on the other hand, we’re talking about new infrastructure that will have to meet many more new legal requirements, such as a reduction in CO₂ emissions.”

Heck of a problem

Salet notes that most infrastructure was built around the 1960s and 1970s. This was done in a short period of time and invariably had a limited lifespan. “We’re now at the point where that lifespan is coming to an end. Moreover, mobility is also changing. It’s not just about infrastructure, there will be other transport systems, for one thing. The entire infrastructure has to be geared towards that.” According to Salet, these are colossal tasks that are highly relevant to society: “I think that, as a transport country, we will have a huge economic problem if we don’t have our infrastructure in good order. It strikes at the heart of economics.”

Other major efforts relate to the energy transition and digitalization. As for the impact of the energy transition on construction, Hendriks explains, “We need to think very carefully about how we’re going to heat our homes given that we need to get rid of gas. There is currently no suitable infrastructure in place at all for large-scale alternative resources such as solar panels or heat pumps.”

A huge increase in the demand for energy is underway. But the question is how and where to generate that energy. “That’s a mega undertaking,” Hendriks said. “In addition, homes need to be insulated. In an efficient way, of course. These are things that we, as 4TU.Bouw, are thinking about and that we now have a leading role in. We believe that someone has to take the reins and, we’re developing a national platform from the universities. That way, people know where they can turn to. Take, for example, housing cooperatives that want to insulate houses on a grand scale.”

Hendriks believes that someone also needs to take charge when it comes to digitalization: “When people think of construction, they tend to think of bricks, masonry and blocks of concrete.” Since that image is now outdated, more use will have to be made of modern digital techniques within the construction industry. “You simply can’t do that on a local level, not as a company acting alone and not even as a separate local government. There has to be a joint initiative that is also scientifically sound,” Hendriks states. The aim is that digital techniques are used when making a structure, a bridge or a part of a house. Besides that, monitoring the condition of the different components also needs to be possible, which is also known as predictive maintenance.”

Accelerate in a sustainable way

Salet: “Then we’re primarily talking about the high-tech side. I also see another side, that of accelerating everything in a sustainable way. After all, acceleration also calls for digitalization. I’m talking about the digitalization of the first design phases and the transfer of that data and information to the actual execution stage. A tower crane then knows exactly what to do based on a set of digital data, as it were. If you speed up that process, you simultaneously speed up the whole housing construction effort.” But, says Salet, if we’re going to speed up things anyway, let’s do it in a sustainable manner from the outset. “Digitalization offers plenty of opportunities in that regard. The use of materials can be optimized, for example.”

As such, 4TU.Bouw is putting construction on the map in a new way. Salet and Hendriks want to bring people together so that they can come up with solutions to the complex issues and challenges. Hendriks: “It starts by bringing the researchers of the four universities together. That way, they are even more motivated to do something good for society.” That is sometimes easier said than done, Hendriks notes. “Researchers are often in a bind. They have to delve very deeply into a fairly narrow area of expertise. At the same time, they have to work together and learn to think outside of their own professional field. Those are two completely different roles that are often difficult to combine in one person. I consider it an important task for 4TU.Bouw to support researchers in that respect.”

One example is the HTSF call(High Tech for a Sustainable Future). Hendriks: ” The four TUs pool their research on relevant themes. A recent theme has been infrastructure, for example.” He notes that this research will be organized to be sustainable: “At each university, new university (head) lecturers will be appointed who will work with each other. They are offered the prospect of a permanent contract. In other words, the aim is that they shouldn’t disappear again after four years. That makes the research model a sustainable one.”

Knowledge development is at the heart of this, Salet feels. “4TU.Bouw stands for developing new knowledge that the entire chain can build on and innovate. We’re providing the system with oxygen. That helps society as a whole. With our knowledge today, we’re really not going to make it.”

Hendriks emphasizes that the researchers cannot do this on their own: “That’s because these kinds of processes are so intricate and at odds with what a researcher normally does, which is to delve deeper into their particular field.” Salet adds: “You’re not there if you only address their individual strengths. Everything has to come together, precisely because the issues are so wide-ranging and complex. We help researchers bring together all those separate pieces of knowledge.”

This duo interview is the first article in a series that 4TU.Built Environment is producing in collaboration with Innovation Origins. In the coming months, we will explore and answer the most interesting and pressing questions in the built environment and how there is collaboration between universities and external partners.

HomeNews`We're only going to succeed with the knowledge of tomorrow'