Something to think about: we will only end climate problems with integral solutions. "It sounds abstract but at the same time it makes perfect sense." 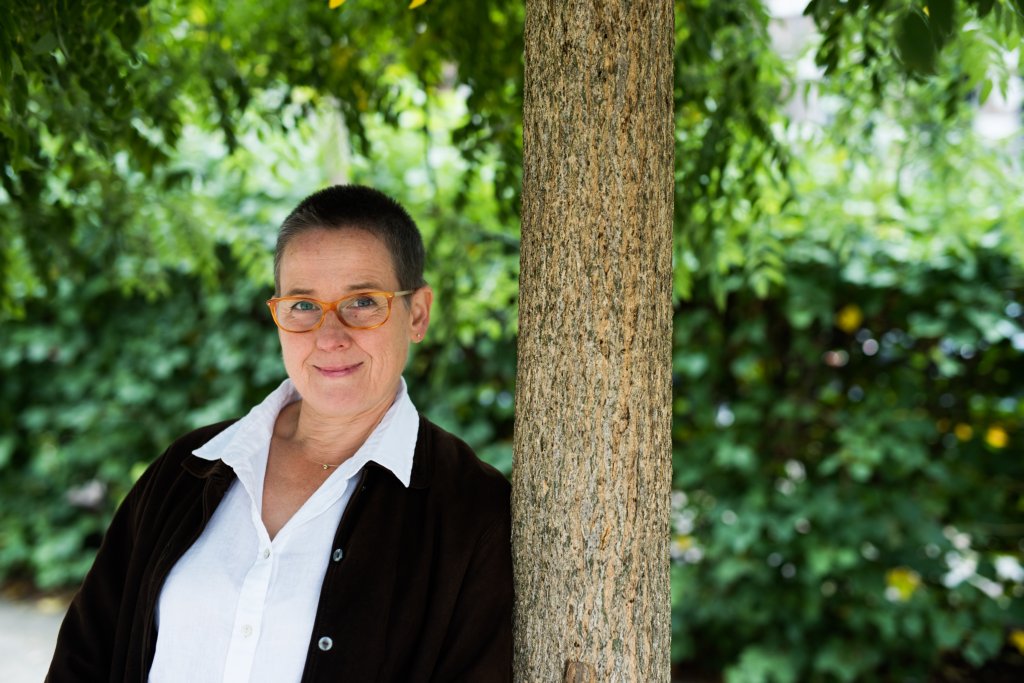 As soon as a period of warm weather or a heat wave sets in, journalists will hop on the phone to Sanda Lenzholzer, professor of landscape architecture at Wageningen University & Research and management team member of 4TU.Built Environment. “I can set my watch by it,” she says with a smile. Climate change is no longer a far-off-in-the-future issue; its consequences are becoming more and more visible. Floods and heat waves make us stop and think. Then Lenzholzer’s phone starts to ring off the hook, as it did last summer.

She is specialized in climate adaptation within the field of landscape architecture, i.e., adapting our environment to the changing climate. “The climate is changing and it’s due to man-made causes,” she says. ” I was hiking in the high Alps this summer. The state of the glaciers is really shocking, that really made me sad. Climate change has such a huge impact, just look at the droughts we’ve been dealing with.” These kinds of crisises are confrontational. If anything, Lenzholzer is convinced that they raise public awareness.

Everyone – from scientists to businesses – is talking about these changes all the time. Just talking will not solve the problem. Stand-alone solutions are all over the place which are not pieced into the bigger picture. Or, at the very least, developments are progressing far too slowly. “My vision and the concept that I’ve developed in response to this is called Deeply Integrated Design. To me, landscape is much more than a small tree and a pond further down the road. It concerns nature as well as culture, it concerns the countryside as well as cities. It includes everything that happens on and underneath the ground, in the water and in the air. It’s all about the interaction of these different systems and the links you can make with them.”

In her designs, Lenzholzer wants to combine the different systems in the built environment. “Then we will end up with the best possible result because it’s all interconnected.” To cite an example, she and colleagues drew up a design scenario for a city in 2120. “We took Arnhem as an example. Two landscapes come together in this city, hilly terrain like the Veluwe and low-lying river areas,” she explains. In this scenario, Lenzholzer and her team developed systems around the theme of water, among other things. “We looked at the elements that are present in the landscape. This is where we linked the high and low areas with each other,” she adds.

Along the course of the city’s streams that flow downhill to the Lower Rhine, new ponds for water storage can be created that hold water to guard against drought. Small waterfalls at the end of the ponds cool the air during heat waves. A second plan is to use wind turbines to pump excess water from the river up the plateaus of the Veluwe and store it in water reservoirs. This would be done in the windy, cooler months when the water levels in the rivers are usually high. It helps keep groundwater levels higher in warmer, drier times.

What’s more, when no other sources of energy are available, the stored water can flow downhill to hydropower plants and generate renewable energy. Lenzholzer: ” So you can see that a range of processes involving air, land, soil and water all converge. This integrated systems thinking also unites colleagues from diverse fields and other stakeholders. This can help to come up with truly innovative concepts.”

Collaboration across disciplines is always the starting point within 4TU.Built Enviroment. This is done in a number of ways, for example, using Domain Driven Teams (Domein Aanjaag teams – DATs). In these teams, researchers work together on different issues such as circularity, digitalization and climate adaptation.

Furthermore, Lenzholzer is working with colleagues on a Multi-Year Mission-Driven Innovation Program (MMIP) in the field of climate-adaptive and environmentally-conscious construction. “In such an MMIP, we set out what kind of scientific research ought to be done around a particular theme,” she goes on to explain. This serves as a framework for researchers to propose new research projects. Lenzholzer: “You can compare it a bit to a tender or a call for tenders in construction or architecture.” An MMIP like this lays the groundwork for future developments and innovations.

She offers one more example of innovations in the field of climate-adaptive thinking and construction. “The wind can be a real nuisance in some cities. The campus in TU Delft is one example of this. Signs hang there to warn people about the wind,” she notes. It can suddenly be very strong in between buildings. “Suppose we harness that wind power, for example, by mounting small wind turbines to buildings.” The same goes for the sun. “We could (temporarily) cover certain parts of cities to provide more shade. In turn, we can use that extra surface area to generate solar energy,” she states. “That’s how we turn nuisances into opportunities. It’s a way of thinking.”

Although it must be said that it is also fairly tricky to devise such a whole new plan where everything comes together. “Processes in soil move very slowly, for one thing, while other processes, for instance, those in the air, tend to go very fast,” she clarifies. Of course, human behavior and awareness also play a large, and sometimes somewhat unpredictable, role.

As a scientist and designer, Lenzholzer has grand ideas. “But it takes a very long time to turn these kinds of new ways of thinking and designing into practical applications. Trying to get people to actually make changes – and the communication that is needed to do that – is a field of science in itself,” she contends. It is a matter of citizens having to partly adapt their lifestyles as a consequence of climate adaptations, but also about municipalities having to adapt their policies.

How can you drive government to make real inroads on climate adaptation in cities? “It mostly depends on the political system. In democratic countries, political will is really important. Raising awareness is a prerequisite, it is imperative that citizens see and understand the problem. Then the will among the general population will be created and later through elections, political will find its feet to really change things.”