Plant agency is commonly understood as being reactive to the environment (i.e., phototropism); however, plants can be proactive, even social beings. Botanists have identified that plants can connect and communicate through a natural language (i.e., carbon, water) to nurture and train their kin (i.e., deliver excess nutrients and send warnings when pests attack). As design researchers, we asked ourselves how we could use sensing and actuating technology to help plants, outside their natural habitats, communicate across species and even with non-organic things.

"Minty Zoo" is a novel system design that translates plants' "language" into data and facilitates non-communicable species (i.e., mints) to communicate. From botanists, we know that plants can communicate and protect one another by nurturing and training their offspring to adapt. Since most natural interactions are highly constrained, only certain plants can achieve this via specific pathways.My project is inspired by this theory and in it we propose an interspecies plant-based communication system to mediate communication between ‘non-communicable’ plants.

In this design, five "hub plants" are placed in a cabinet, and they are given uneven amounts of resources (water and light). By observing plants' collective behaviours through 15 sensors (monitoring: soil moisture, temperature, humidity, carbon dioxide, ammonia, and timelapse of growth), the data were used in resource re-distribution that helped to nurture the "seedling" on the top—ultimately recreating the "hub plants nurturing kin" scene via artificial means. 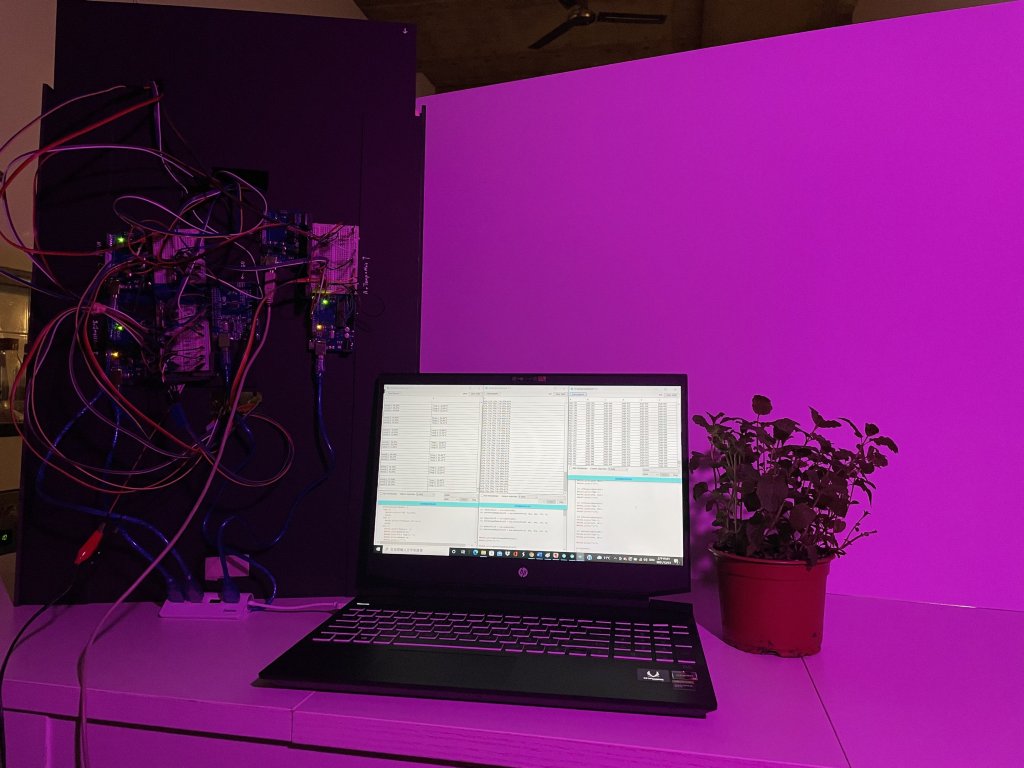 We have used Minty Zoo as a research probe in another paper— "Plantroids and Plantborgs: Design Speculation for Plants as Social Actors." `The team initiated an active discussion among designers, ranging from reflecting on human-dominated ecosystems to seeing plants as social actors. The project presents stages of our design research processes, and reflections on how plants can actively play a role, including co-speculation of Plant-Computer Interaction (PCI) design opportunities with six designers. In conclusion, our prototype reveals new design opportunities for creating a plant-based communication system through sensing technology and introduces novel concepts (plant interaction) to activate the design community.