The team of the HTSF Soft Robotics programme are working on soft robots that are safer and better equipped to function in a human environment. This is a new specialisation that involves many fields of expertise.

So collaboration between the four universities of technology is indispensable, to say the least. The 4TU.Federation interviewed Aimée Sakes (TU Delft) and Ali Sadeghi (University of Twente) about the team’s ambitions.

Why was the 4TU.Soft Robotics programme set up?
Aimée: Conventional ‘hard’ robots can only work in a preprogrammed environment where they can carry out repetitive tasks with superhuman speed and accuracy. Think for example on robots that fit doors to cars on an assembly line. But the car only has to move 10cm out of line for the process to go wrong and the robot to make mistakes. Moreover, these robots take no account of humans in their environment, making it hazardous for people in working proximity to the robot. To prevent this, large cages are often fitted around such robots.

A radically different approach is needed for robots that need to pick up delicate objects such as fruit or human tissues, or where there is direct interaction with people. The 4TU-funded Soft Robotics research programme is working on a new generation of robots that can work safely in dynamic environments, such as the human body, and that can work safely alongside people. Take for example a care robot that can move about safely within a hospital environment or robots that can pick strawberries without damaging them.

We have a great need for this new generation of safer, soft robots. Our ageing population means there is increasing demand for nursing care in hospitals and at home. And by developing these new soft robots we want to make even more diseases treatable.

“Designing, building, modelling and controlling soft robotics is complex. All of these different aspects require a close collaboration between different fields of expertise.”
Ali Sadeghi (UT)

What is the advantage of soft?

Aimée: Using soft and flexible materials means that you cause less damage to the body and enables you to reach deeper into the body. We often use nature as inspiration for our designs. For example, the soft suckers on octopus arms allow them to gently take hold of wet and slippery objects. This is a useful property for surgical instruments that need to grasp delicate human tissues. Octopus arms also offer more freedom of movement than traditional medical instruments.

I also read on your website about the importance of integrated design. What do you mean by that?
Ali: If you look at a human arm, it’s quite easy to distinguish the various elements that provide structural support (the bones), movement (the muscles) and movement control (the nerves). If you look at an octopus arm, you see an extremely complex structure in which these functions are integrated. For example, you see several overlapping muscle layers for moving the arms, muscles for operating the suckers, all kinds of sensors for sensing the environment and nerves for controlling these structures. All of these tissues are integrated and together (called arm) ensure that the octopus can move and can sense and manipulate objects in its surroundings. We are looking to integrate a similar structure into our soft robot designs, thereby increasing their functionality. Collaboration in the area of materials, design and control are crucial to this.

What are your ambitions?
Ali: Soft Robotics is a relatively new specialisation. The first soft actuators – robot motors- were developed in the 1980s and 90s in Japan. The new concept of soft robots dates back to 2000-2010. Countries such as Italy, Great Britain and Japan are leaders in this field. Our ambition is to do at least as well, if not better. The strength of a small country like the Netherlands is the high density of expertise located close together, from production to the application stage. Before coming to the University of Twente, I also spent some time in Italy, and knowledge exchange was much more difficult there with the long distance between Northern and Southern Italy.

Are there other things that strike you, as a non-Dutch person?
Ali: Yes, the connection with the industry and the university medical centres is really good here. And the grant system in the Netherlands also helps. One of the criteria set by grant providers such as NWO and ZonMW is that you involve a company in your research. That has been well thought through.

Aimée (adds): Yes, that’s right! The researchers in the HTSF Soft Robotics project have all this knowledge at their fingertips. One researcher is focusing on how you can pass on and adjust tactile feedback from the robot to the user (sensing) (Michaël Wiertlewski, TU Delft), another on controlling the soft robot (haptic interfaces) (Irene Kuling, TU/e), I personally am focussing on the design and application for this robot and, last but not least, nature – which forms the inspiration for the soft robots – is scientifically studied in Wageningen (Guillermo Amador, WUR). Ultimately, all these fields of expertise come together and have to work together in order to create a single functional, soft robot.

Ali: Besides this, from Soft Robotics we work together a lot with doctors from the university medical centres like Radboud UMC and research institutes such as AMOLF.

What are you personally working on right now? 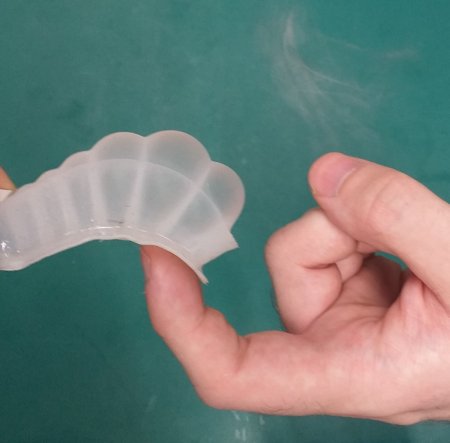 Ali: I’m working with my team in the Soft Robotics Lab on production methods for soft materials, such as specialised 3D printers, and smart soft structures for the human body, for example soft exoskeletons for people recovering from a stroke. The new exoskeletons are made of textiles and rubber and help people to walk better. For example: if they need to climb stairs, the exoskeleton holds the foot in place better. For the manufacture of these exoskeletons, we take a step back in time as this is done using a traditional sewing machine. We also work on a new generation of robots that can grow and build their own body. These robots that move through the environment by growing, similar to how tree roots move through soil, have a great potential for use in minimally invasive surgery and body monitoring. 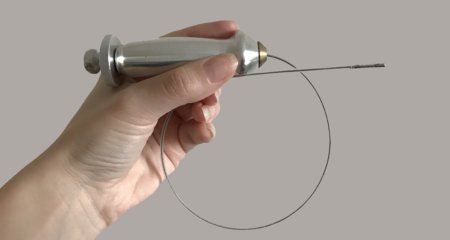 Aimée: My team are developing smart, flexible medical instruments that can reach deep in the human body and perform operations in the heart or brain, for example. As already stated, we often take inspiration from nature when designing these instruments. For example, controllable catheters for heart surgery inspired by the previously mentioned octopus’ arms, hammer catheters for reopening coronary arteries that are based on a chameleon tongue and a tissue transporter for removing tumours from the body based on a wasp stinger. For the design of all these instruments we used smart mechanical constructions in order to make flexible structures from hard materials such as steel and to integrate several functionalities into just a couple of parts, which enabled us to create ultra-thin instruments.

What are you proud of?
Aimée: Joshua Dijksman and Preeti Sharma from our team are working on a prototype that is very close to valorisation. This is a new kind of Velcro inspired by the hairs of a mushroom. The material sticks better than traditional Velcro and does not damage the gripped surface.

Ali: The whole team are also working on a Soft Robotics demonstrator that we want to use to test and demonstrate the new functionalities of a soft robot. I can’t say too much about the results just yet, but I would like to say that working together on a demonstrator like this is fantastic for the team spirit. To be continued!

Robots that operate among people need a ‘soft touch’. The robots used in industrial production are extremely precise and fast, but they are also rigid. They are less suitable for safe physical contact with people or, for example, picking up foodstuffs that can be damaged easily. The HTSF Soft Robotics programme seeks inspiration from nature, like the grip of a tree frog or the flexible arms of an octopus. Biological knowledge, new control technology and innovative robot design go hand and hand here: the partners in 4TU strengthen each other, so that the Netherlands can command a leading position in this new field.

With the award of a total of 22 million euros to five research programmes on the theme of High Tech for a Sustainable Future, the 4TU.Federation gives a huge boost to research on sustainable technology. This enables the four universities of technology to take the lead in creating significant impact on challenges facing society in the long term. The four universities of technology have made this sum available in the context of the profiling budget intended for research that contributes to the Dutch National Research Agenda (NWA). The research proposals fit the focus areas of the government’s Top Sector policy, the NWA and the Sustainable Development Goals of the United Nations.