Bringing high-performance diagnostic tests such as the coronavirus test to market faster in the future? Delta Diagnostics - a spin-off company from TNO- is developing a technology platform to make this possible.

The most well-known diagnostic test at the moment is the corona test, but this is not the only disease where such a faster test can be useful. In order to recognize other diseases and infections, it is also useful to be able to measure certain substances in the body. For example, specific proteins in a blood sample. Preferably done directly at the doctor’s own clinic or at a patient’s home, these are also called point of care tests. This is faster than relying on a laboratory, as is often the case at the moment. Right now, there are not so many effective point-of-care diagnostic tests available for detecting certain substances in the body that indicate disease. Bart de Boer believes this has to change.

He founded Delta Diagnostics as a spin-off company from the Netherlands Organisation for Applied Scientific Research (TNO). Delta Diagnostics provides an instrument for this purpose that contains these types of optical chips. Companies can add a biomolecule layer to it that enables the chip to measure specific substances. This makes developing such a test much easier, faster and cheaper for companies and other parties such as universities. “Hopefully this will lead to many more diagnostic tests becoming available in the future that recognize a variety of diseases earlier and more accurately. This will lead to better treatments as a result,” says De Boer. 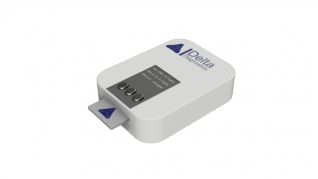 Apart from the chip, the company is also developing a so-called point-of-care analyzer. This enables the test to be carried out on site and avoids having to be done in a laboratory. This can be done at a general practitioner’s clinic or at the patient’s home. The results are then known within fifteen minutes.

Moreover, only one drop of blood is needed for the test, instead of the customary lab test tubes. “This way, not only is the development of the test faster, but the test itself can be performed faster,” states Peter Belt, CEO at Delta Diagnostics. The analyzer is no bigger than a lunchbox.

The point-of-care analyzer means that Delta Diagnostics’ technology is suitable for diagnostic tests that can detect acute problems such as a heart attack. “Then you immediately know what’s going on and the doctor can start the right treatment straight away,” says De Boer. Additionally, it is also possible to use the rapid diagnostic tests for cancer screening, for one thing. “With these types of diseases, you want to make a diagnosis and start treatment as early as possible, preferably even before the patient develops symptoms,” he goes on to say. Diagnostic tests based on Delta Diagnostics’ chips are capable of measuring multiple substances simultaneously. This enables general practitioners, for example, to quickly have an indication of a patient’s condition.

Delta Diagnostics is not the only company focusing on new optical sensors to improve diagnostics. “Others often focus on developing a single diagnostic test. We are building a platform on which they and other parties can develop tests more quickly and cheaply,” says De Boer. “Our technology will hopefully form the basis of a lot of different diagnostic tests from a variety of companies and knowledge institutions in the future.”

It was clear to De Boer that the spin-off had the potential to make a difference in the medical field. But now that the first prototypes are ready, he is also getting inquiries from other sectors. For instance, there is interest in the technology for measuring contaminants, as in pollutants that unintentionally end up in food. Similarly, the method could also be used in forensics to extract more information from perpetrators’ traces found at crime scenes. “I hadn’t realized that there was so much interest from so many different angles,” says De Boer. “Of course, these companies can also simply use our platform to research their applications in more depth.”

On the market next year

The first prototypes are already ready and are now being used by the first customers, such as research groups. Delta Diagnostics wants to bring the first product on to the market next summer. This concerns the chips and the associated instrument that other companies can use to develop their own diagnostic tests. The point-of-care analyzer, which is needed to perform the test directly, is set to follow not long after.

Diagnostic tests can be performed in the meantime, but they must be done in a laboratory. “The development of the test is a lot cheaper and faster for companies,” Belt states. “Normally, you would need different instruments at different development stages. With our technology, companies can go through all those stages with a single chip.” That makes the technology more accessible to a larger group of companies.

The product is now nearing its market launch, but it took a great deal of research to get there. “We did the first trial in 2012,” De Boer chuckles as he reminisces. The technology had potential and we kept moving forward one step at a time in the development process. He participated in TNO’s Tech Transfer program to find out if there could actually be a business model in it. This is an internally funded program in which researchers receive funding and guidance in several steps to look into a potential business case around their technology.

“Though this, we try to encourage the creation of spin-offs,” says Michiel Oderwald, Senior Business Developer Bio-Medical Devices at TNO. “Because of the available budget, people are actually given the scope to do good research on a business case. If you have to do that in between your regular work, then day-to-day tasks often win out.”

TNO aims to contribute to solutions that solve societal problems by making knowledge available to companies and governments. “If we want to have an impact, we can, for example, collaborate with industry or we can set up a start-up ourselves,” Oderwald says. Three years ago, the latter turned out to be the best option for Delta Diagnostics. According to the business developer, it is crucial to have someone like Bart de Boer driving the initiative. “He believed in the technology from the very first moment and that’s why he has always managed to raise funding so that further development can take place,” Oderwald says.

When it comes to medical devices, founding a start-up is often a logical choice when it comes to advancing a technology. “Large companies often don’t dare come on board if a technology has not yet proven itself,” says De Boer. They either develop the new equipment all by themselves or buy up a smaller company once their technology is well and truly on the market. The CTO therefore does not rule out that Delta Diagnostics might be bought out by a larger company within the industry in the future.

Although De Boer is still fully focused on the growth of his spin-off for the time being. “The coming year will be all about bringing the very first product onto the market. We are currently working on a funding round for that,” he says. The company will also be focusing on gaining external validation. “We hope that other companies will also show that tests made with our platform actually produce decent results,” he adds. Meanwhile, the research, which is partly in collaboration with TNO, is still continuing. “We want to keep optimizing and developing the technology. That way, more and more diagnostic tests will be created that improve the treatment of patients.”