The spin-off of the spin-off | A naturally biodegradable alternative to microplastics in e.g. body scrubs and detergents. That is what Iamfluidics, a spin-off from the University of Twente, is in the process of developing.

Iamfluidics works on the development of new types of microparticles. These very small particles are found in all products around us, from the food we eat to beauty products, and from medicines to dyes. The microparticles - which can consist of various materials - have different functions in these products. In body scrubs, for example, it could replace microplastics that now provide the granular structure. In medicines, microparticles can cause a pill to disintegrate in your stomach and spread the delivery of the drug out over a period of time. In addition, microparticles play an important role in the development of cultured meat. Cells grow on a specific substrate and microparticles are what form that specific substrate. "If you the ability to make microparticles really well, then you can access a lot of markets for a whole host of different products," says Claas Willem Visser, co-founder and CSO of Iamfluidics and associate professor at the University of Twente in the Netherlands.

Visser discovered the new technology for making microparticles about five years ago in the laboratory at the University of Twente. He patented the technology and as it showed so much promise, he founded a spin-off together with his partner Tom Kamperman. Iamfluidics is now a rapidly growing company with seventeen employees. Making microparticles is a very complicated process. "If it was easy, companies that need it would make their own microparticles," he notes. "We have a team of materials scientists, chemists and physicists to make these particles so that they do what they need to do."

Iamfluidics is putting its efforts into making microparticles that are not yet made by anyone else. "The European Union wants to ban microplastics in, for instance, ointments and detergents. At present, microplastics are used, for one thing, to put the fragrance of laundry detergent into your clothes in a good way. Companies have to find another solution, and we can help them with that," Visser says. "We then look at materials that are good for the body and that are naturally biodegradable."

“Spin-offs are diamonds in the rough. You never know how the companies will turn out, but if you do nothing, then you, as a university, are leaving gems lying around”
Claas Willem Visser
co-founder and CSO Lamfluidics

The technology that Iamfluidics now uses stemmed from the time when Visser and his partner were working on another research project in biomedical technology. "Tom ran into a problem in his research that revolved around protecting cells through the use of microparticles. The technology I was developing at that point also turned out to work very well as a solution to Tom's problem," Visser recalls. "I wanted to write a paper for publication and then continue with the research but Tom wanted to explore the technology further and look for new possibilities." The paper that the two researchers eventually wrote contained first generation products. That also immediately laid the foundation for the patent as well as the Iamfluidics company.

Then the entrepreneurs started looking at potential markets where the technology could be applied. "Because the EU is banning microplastics, the market for personal care products proved particularly interesting," he says. "In the longer term, food production and the pharmaceutical industry will also be included."

The University of Twente - where all the initial research also took place - played an important role in the foundation of Iamfluidics. "Without the UT, the company would never have existed," Visser states. According to him, the research environment there was crucial. "It is an incubator full of all kinds of people with all sorts of different ideas. That's how you can bring divergent worlds together and achieve cross-fertilisation. That ultimately leads to innovation."

Apart from that, the UT also helped the entrepreneurs on the practical side of things when it came to setting up a business. "The university's large network was really useful," he comments. For example, they got in contact with people who could help us apply for patents, look for investors and with the business development of the company. Moreover, spin-offs can rent lab and office space at reduced rates. 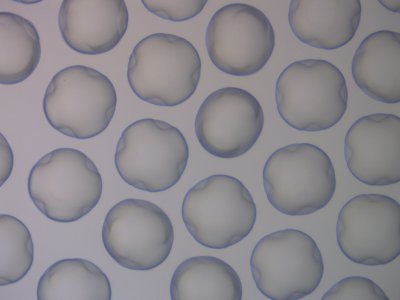 According to Visser, establishing spin-offs is an important way to actually get innovations off the ground. "Within universities, technology is developed that cannot be developed in other places. It is important to bring that to the market to ensure that it can be of service to the rest of the world," he maintains. "Spin-offs are diamonds in the rough," he continues. "You never know how the companies are going to turn out, but if you don't do anything then you, as a university, are leaving gems lying around." All technical universities have a Tech Transfer Office to help scientists who want to start a company move forward. "That's a good basis, but it can always be better," Visser states.

He found that the negotiations with the university about the shareholder stake were also a difficult phase. "The university conducts these kinds of discussions every day but I was doing it for the first time as a young rookie. This made me feel like a tiny kid in front of a big giant," he notes. "It would be nice if entrepreneurs could be better supported in situations like this by someone outside of the university."

He also thinks it is important that more money is made available for master's students, PhD candidates or scientists who want to start a business. "There are a lot of financial risks involved in entrepreneurship. I think it helps if more scholarships and grants are made available to get through the first few years. That gives entrepreneurs a peace of mind and confidence," he says. "Only recently, a lot of the subsidies have actually turned into loans instead of grants, such as the NWO Take Off. With that, I think the government is really putting up a huge barrier in the way of young people who are trying to start a business. Loans are nice for people who are actually already established and who can do business without any risks. For other people, start-ups for example, a loan is difficult, even if it is a soft loan."

Visser views the future positively. "Start-ups set impossible goals and yet go for them 100 percent. They are either stories about major setbacks or huge breakthroughs. It's a matter of hurdling ahead or standing still, especially in high tech," he states. The CSO has a fine goal in mind. “ Currently, we are working on a small scale, with samples in small containers, but in the future we will be talking about large vats and trucks full of microparticles. We want the particles we make with this new technology to end up in as many markets and products as possible." He hopes that the first products with Iamfluidics' microparticles will be in stores within two years.