VSParticle, a TU Delft spin-off, develops a printer that spits out almost any kind of conceivable new material in a few minutes. It is a revolutionary advancement in research that should boost innovations. 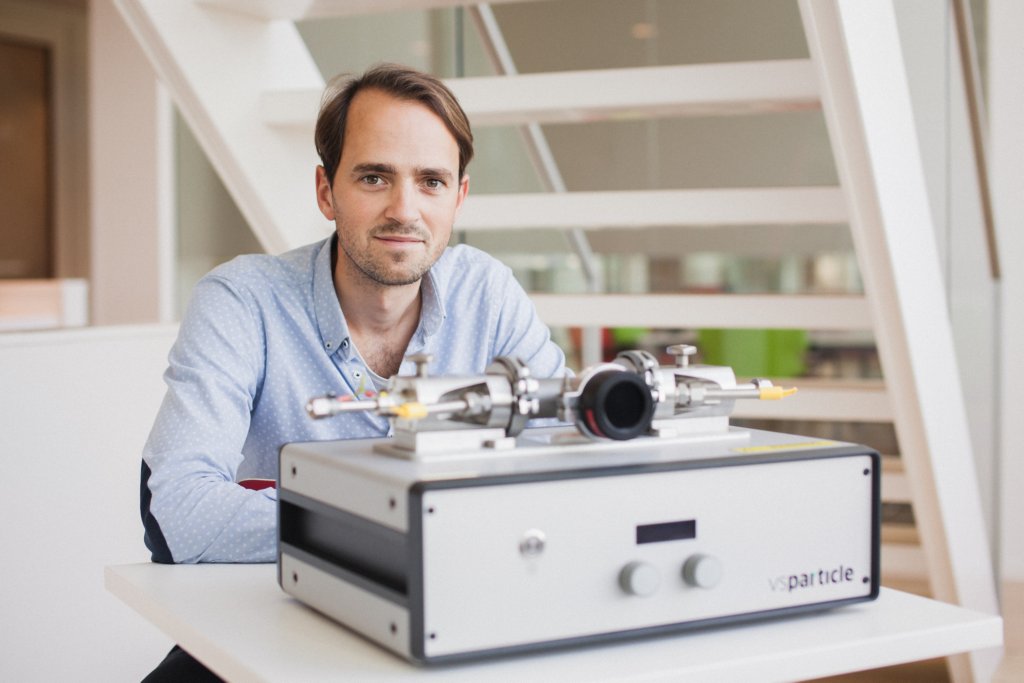 It has to be done differently, and it can be done differently. This is the firm belief of Aaike van Vugt from VSParticle, a scale-up that sprang from the lap of the Delft University of Technology seven years ago. "Materials research is a process of trial and error, which is very slow and costly. To develop a new material from the first trial in the laboratory to industrial production, it easily takes fifteen years," says VSParticle's 31-year-old CEO. His company has developed a solution, a NanoPrinter and an automated laboratory, that has the potential to usher in a veritable revolution. The NanoPrinter, Van Vugt explains, can be compared to an inkjet printer, which can print over 15,000 types of colors in any form using four base colors.

"We can put 62 basic elements in a solid form into the NanoPrinter, such as zinc, aluminum and titanium. The printer mixes the elements in the desired quantities using a digital process. The materials are also turned into nanoparticles. The advantage of this is that the physical properties of the material change, thereby giving you even more options for creating a new material".

The machine prints the material in any given shape during a sort of digital, additive manufacturing process. When you think about it, there is something incredible about this method. Within minutes, the NanoPrinter spits out (prints in 3D) the new material with the specified properties in the desired form. A researcher would - as it goes in the scientific world - be busy for months with that.

And we are not there yet. A researcher today must test the new materials, process the data, draw a conclusion. If the material they want is not satisfactory, apply new parameters to start a new cycle of trial and error. If things go wrong, materials research is done thousands of times before the result they want is there. The NanoPrinter shortens the development cycle from years to hours. The process of searching for the desired material is a continual process of development. The machine, of course, does not have to comply with a CLA, and is in operation 24/7.

Apart from the NanoPrinter, VSParticle is also developing a fully automated lab. Instead of researchers made of flesh and blood, computers make, test and analyze new materials there. An automated robotic arm brings the substrate from the NanoPrinter to the lab, where it is analyzed by a smart computer system. The computer sends new commands to the printer each time until what the researchers are looking for is achieved.

The automated lab is not designed to put researchers out of work. There is plenty of other, more complicated and creative research left to do. It is better to have scientists work primarily on that. Automated research and creative experiments can be a good complement to each other.

One more advantage of automating materials research is that all data is stored automatically. This way, the most extensive and valuable database of material properties in the world is being built step by step. The database is of great value to science, plus participating universities and institutions can reap the benefits from it. The database also facilitates greater efficiency and coordination.

Because the university world is a somewhat insular environment, it frequently happens that the same materials research is being done simultaneously at several institutions, without them being aware of this or wanting to know about it. Consulting the database is a good way to avoid duplication.

The NanoPrinter and the automated lab have the potential to be of great benefit to society, as new materials can be developed much, much faster. This will be advantageous for innovations and consequently for decarbonizing society.

The idea of VSParticle does have something altruistic about it. It's like a type of public benefit institution. VSParticle is even in talks with the most well-known universities and scientific institutions in the world to make a NanoPrinter available on a sponsored basis.

That said, the company's business model is very rational. In exchange for the free delivery (and support) of the hardware to "science," VSParticle receives certain rights to the intellectual property or what is developed with the equipment. "Our company forms the link between researchers and industry," Van Vugt clarifies.

VSParticle develops new materials in its automated laboratory for its industrial clients, enabling them to bring new generation high-tech products to the market. In order to be able to put the material developed by VSParticle into production, VSParticle, in cooperation with industrial partners, is developing a second generation NanoPrinter that makes manufacturing possible. Once the new high-tech product is sold to the customer, VSParticle receives a "fair share of the sales," as van Vugt puts it.

The first NanoPrinter will be presented in 2022. Van Vugt is not concerned that the entire project could still fail. After all, a prototype is already being used to good effect at the Delft University of Technology. In the past four years, VSParticle's submodules, the functioning components of the NanoPrinter, have been installed at thirty institutions around the world, including in China, Japan and the United States. The goal is for this NanoPrinter to become the world standard for making new materials as well as a global ecosystem in the field of data management. It should also lead to leading institutions collaborating with each other.

Although, the hope is that this cooperation will take place. Van Vugt acknowledges that at first glance that may not seem easy. "But we are assuming that the urgency of the climate problem will lead to scientists actually wanting to work together. We are focusing primarily on the new generation of (assistant) professors, who are conscious of this and are also aware of the inefficiency of current scientific research.

The question remains as to what technology is behind the NanoPrinter. In a nutshell, it is the so-called spark ablation technology, a physical process whereby pure particles are generated in a highly controlled environment, without the use of chemicals.

This technology was invented by Andreas Schmidt-Ott, professor of Chemical Engineering at Delft University of Technology. He is also one of the co-founders of VSParticle.

Innovation Origins already had VSParticle on their radar three years ago. Read what they wrote about it.